Pest so new, it has no name and unclear impacts.

Researchers and plant pathologists often have to deal with great ambiguity. On one hand, there is the anticipation of dealing with new diseases or pathogens, and disseminating the impact on plant health and yields. On the other hand, there is the reality of finding one answer that simply leads to more questions.

As a starting point, some facts must be clearly understood. This disease pest is a very recent discovery, so new and so uncertain are its effects, it took nearly a year before pathologists in Ontario were allowed to talk about it. As a result, very little is known for certain about its origins. Although discovered in Tennessee, it is not known if it could mirror its soybean cyst nematode relative and migrate north towards Ontario. And its impact on corn is still under debate; the field where it was detected had a long, 10 plus year history of nothing but corn.

Tests at the University of Missouri at Columbia indicate corn to be an excellent host for this new cyst nematode.

What is known
The history of this particular cyst nematode dates back to June 2006 when Bob Heinz, laboratory co-ordinator at the University of Missouri at Columbia, first identified it. He had received a root sample and a bag of soil from a seed dealer, and was told it had originated from a field in the southwest corner of Tennessee. Corn from the field was described as stunted with narrow, off-coloured leaves, producing few tassels or ears. “It was actually the seed dealer that sent it to a nematode laboratory because it looked like a nematode problem,” explains Heinz. “As I was looking through the microscope, I didn’t see anything that should have been a problem on corn, especially with the symptoms these guys were seeing. But I found 465 of what I had assumed were SCN juveniles.”

The presence of SCN might have made sense in a field with a corn-soybean rotation, however Heinz realized that was not the case in this situation. He also had the corn cyst nematode discovery from the 1980s in mind, understanding that corn cyst nematode is not a significant problem in the US. However, the cyst juvenile numbers were just too high and the cysts that came off the corn roots were smaller than soybean cyst nematode, about one-third to half the size of SCN cysts.

The new cyst nematode on corn looks very similar to soybean cyst nematode but are generally smaller, requiring a microscope for identification.  Photos Courtesy Of Bob Heinz and Dr. Melissa Mitchum,
University of Missouri at Columbia.

Heinz considered the possibility of a leguminous weed that was mixing in with the root, since it seemed impossible to be coming off a corn plant. “I took all of these cysts, ground them up and took an old Williams variety soybean, and a regular commercial corn seed, and put half the inoculum on the soybean and half on the corn,” details Heinz, who left it for 30 days in a water bath in his greenhouse. “I blasted the Williams and found absolutely no cysts. Then I blasted the corn and got a whole bunch of these little white cysts back.”

He repeated his own procedure to confirm his findings, then sent them |to Dr. Tom Powers in Nebraska and to the Henry A. Wallace Beltsville Agricultural Research Centre (BARC) in Maryland. Using molecular markers, Powers determined the cysts do not resemble the Heterodera zeae pathogen that causes corn cyst nematode. At BARC, researchers looked back to find that work on goose grass in Tennessee had yielded cysts of a similar size.

Further testing finds it prefers corn
Additional tests by Heinz have found that this pest overwhelmingly prefers monocotyledons over dicotyledons. “On the dicots, I couldn’t find any growth,” he says, adding that he has tried different grasses including shattercane grass and Johnson grass to determine if they could be suitable hosts. “I had three sources of goose grass and couldn’t get any of them to germinate. The best host of a grass would be if I put 8000 eggs on, I’d get enough cysts to get 8000 eggs back, which is a one to one ratio, which means it’s a host. The corn, if I put 8000 on, I might get 150,000 back, so it’s a great host.”

Heinz also tested white food corn, popcorn, GMO hybrids, and even went to the extent of scrubbing the treatment off seeds and found the number of cysts went up slightly. 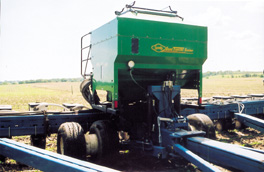 Impact of temperature not certain
Admittedly, this new form of corn cyst nematode was found in the subtropical climate of Tennessee, which begs the question of whether it is capable of migrating to cooler climates. That is of considerable concern to Dr. Greg Tylka, a professor of plant pathology at Iowa State University and a nematode specialist. Tylka expresses his uneasiness at all of the unknowns relating to this new cyst nematode, not just for its impact on corn plants, but also where the new cyst nematode might already exist and what it could do to his SCN research plots. “But the concern about how it might affect SCN field research is putting the cart before the horse in a way,” says Tylka.

Little is known about this cyst nematode on corn, yet growth in a laboratory setting shows the kind of stunting that can occur, even at 30 days.

“The first task is to determine where else this new cyst nematode on corn might exist and what, if any, damage can occur in corn as a result of this new nematode. It’s so new, we can’t even answer those questions.”

As for the impact on his research, Tylka says if the new cyst nematode on corn would occur in Iowa fields, it
could effectively shut down his SCN research program because the only cyst nematode species that exists in Iowa is assumed to be SCN. Yet a means of distinguishing between the eggs of SCN and those of a corn cyst nematode does not exist and would take years to develop. That has Tylka concerned about a potential shut-down in the event that this cyst were to occur in Iowa. “And that’s regardless of whether it’s even damaging in this climate.”

Such is the reality of trying to deal with the uncertainty of this disease pest. So little is known about it today; its transmission or migration potential, as well as its impact on plant health and yields simply are not known.

Ontario perspective
For Albert Tenuta, field crops pathologist with the Ontario Ministry of Agriculture, Food and Rural Affairs, the prospect of northward migration is equally alarming. Although identified in June 2006, he was not allowed to discuss the situation until after the risk potential had been determined in July 2007. So he agrees with Heinz and Tylka and their respective worries about this pest, and pledges to continue studying corn roots across the province.
“We have not seen any cysts associated with those roots, although we see root lesion nematodes as our most important corn nematode in the province,” says Tenuta, echoing Tylka’s observations about proper means of identification and developing new detection methods. “Until there are accurate identification methods, or a specific molecular test is developed, a lot of identification is based on examining cysts and eggs just like SCN.”

If there is a positive note, it is in the relatively slow migration pattern of cyst nematodes. “Often what we will see is a gradual detection over time, and movement and spread, not like soybean rust or any of the rust diseases that we see in wheat or corn that have the ability to spread vast distances within the same year,” reasons Tenuta.

“Often with the nematodes, being soilborne or soil transmitted, they take time to spread. The big unknown for Ontario is whether our risk is coming from southwestern Tennessee only or other points a lot closer. Time will tell.”