A new soybean virus confirmed in Ontario is presenting pathologists with more questions than answers. Soybean vein necrosis virus (SVNV) was confirmed in southwestern Ontario in late September 2012. Very little is known about this disease, which is relatively new in both Canada and the United States, but Ontario Ministry of Agriculture, Food and Rural Affairs field crop pathologist Albert Tenuta assures Ontario growers that it’s here to stay. 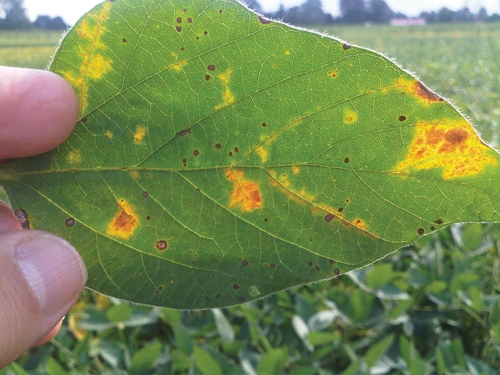 First identified in Tennessee in 2008, the virus spread north across soybean producing areas and recently into US states bordering the Great Lakes, and now, southwestern Ontario. “SVNV has likely been here for some time prior to the recent detection, but has been misdiagnosed,” says Tenuta, explaining that the virus was likely associated with symptoms of other diseases that look similar, such as Cercospora leaf blight, scald and plant stress. Just as its name describes, SVNV affects the veins of the soybean leaf beginning with light green or yellow patches near the main vein, turning to brown as they get larger. The vein may appear clear, yellow or dark brown in colour in affected plants, and the browning of the veins may be especially noticeable on the lower leaf surface.

Questions to be answered
Fortunately for Ontario growers, there was no impact of the disease on the 2012 soybean crop. But the potential impact of this new disease is still unknown. So far, SVNV has been infecting crops late in the season in fields within US states bordering the Great Lakes, resulting in minimal injury or loss. However, Tenuta points out that, since the disease is here to stay, growers shouldn’t discount the potential impact SVNV could have on yields. “While we won’t see any great impact immediately, there is likely some risk potential over the next few years,” says Tenuta. The disease will likely become more prevalent over time and its effect on production and yields will also be determined on any existing diseases and insect pressure within a field. Currently SVNV poses a low economic or yield risk to Ontario soybean fields. But further studies are needed, especially in areas such as Tennessee, where infection or defoliation of fields is occurring earlier in the soybean growth cycle.

The disease is vectored, or spread, by thrips and possibly other insects, says Tenuta. The hot, dry growing season of 2012 provided great conditions for thrips to thrive and transmit SVNV. The mobility of thrips as vectors is affected by currents and wind movements, making further transmission of the disease dependent on weather patterns. More research and information on the transmission of SVNV is currently being sourced. Tenuta says more research on disease movement and infection is necessary, and explains there is also the potential for host crops, or multiple host species, that could carry the disease and increase movement.

The virus belongs to the Tospovirus group that includes tomato spotted wilt virus, and it is possible SVNV could affect other crops such as tomatoes, or even use them as host plants. SVNV belongs to a group of viruses that are not known to be transmitted by seed, but further research will be necessary to verify this claim. Symptomless carriers, such as weeds that could be a constant inoculum source, are also being researched. “It’s important to find the source of SVNV because, if we don’t know the source, it reduces efforts to eliminate the virus,” says Tenuta.

Sharing information
This winter, plant pathologists, researchers and extension personnel from soybean-producing areas in Ontario and the United States will be meeting to share information and learn more about SVNV. It’s hoped this discovery process will lead to a better understanding of the virus, its impact on yield, and field management tools to treat this new disease. “We’re all in information collection mode,” says Tenuta, who is already working with representatives from affected SVNV areas in the United States to share information and learn more about the disease. Currently, projects in the US are looking at the impact of early exposure to the disease, conducting molecular testing to identify SVNV and researching soybean variety tolerance.

Tenuta advises Ontario soybean growers not to panic about the discovery of SVNV. He assures them that as more information is shared and the industry gains a better understanding of this new disease, recommendations on management tools and any resistant varieties will be shared to help growers combat this additional production challenge.