The vast majority of pea and lentil growers use rhizobia inoculants as a standard practice. After all, a small investment in an inoculant can bring large rewards in nitrogen fixation and yield. With the understanding that inoculants are part of the pulse production program, the difficult decision is which inoculant to use. That choice just became easier.

Launched in July 2011, new Nodulator XL inoculant for pea and lentil brings Western Canadian growers an improvement in rhizobia inoculants. With yields up to eight percent higher than leading inoculants, Nodulator XL has the potential to increase revenue by a substantial margin.

“Nodulator XL has an improved strain of rhizobia. It is like humans. We are all Homo sapiens, the species, but we are all individuals that do some things better than others. A rhizobial strain can be likened to an individual within the human population,” says Fletcher.

Three formulations
Available for the 2012 planting season, Nodulator XL will be available in liquid, self-adhering peat-based and solid core granular formulations. Each formulation can be used on both pea and lentil.

The solid core granule has a reduced application rate compared to the previous Nodulator granular formulation, and is available in 50-pound or 364-kilogram Q-Pak mini-bulk bags. 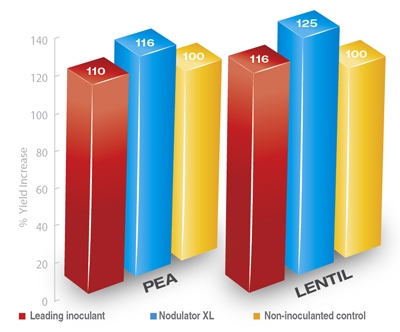