New pea, lentil and chickpea varieties are under development and some are being introduced for the 2013 growing season. The following information on Crop Development Centre (CDC) varieties at the University of Saskatchewan comes from Dr. Bunyamin Tar’an, Dr. Bert Vandenberg and Dr. Tom Warkentin, pulse crop plant breeders. Varieties with “MP” and “PO” designations are under development at Agriculture and Agri-Food Canada at Lacombe, Alberta; information is provided by plant breeder Dr. D.J. Bing.

Certified seed of CDC Treasure will be available in 2013. It has good yield compared to Cutlass at 105 percent in the south and 110 percent in the north, with good lodging resistance and early maturity.

Certified seed of CDC Hornet should become available in 2013 or 2014. It has good yield compared to Cutlass at 107 percent in both the southern and northern regions, with good lodging resistance and medium maturity.

Certified seed of CDC Saffron should become available in 2014 or 2015. It has good yield (when compared to Cutlass, 115 percent in both the southern and northern regions), and medium-large, smooth, round seeds.

Breeder seed of CDC Amarillo (2462-30) was released for the first time in 2012. CDC Amarillo had strong yield performance in Saskatchewan regional trials over the past two years with a mean yield when compared to Cutlass of 119 percent in the south and 131 percent in the north. CDC Amarillo is relatively tall with one of the best lodging resistance ratings among pea varieties in Western Canada.

CDC Tetris is an “Espace type” variety with blocky seed shape that has specific demand in China for snack food markets. Certified seed of CDC Tetris will start to become available in 2013.

CDC Pluto is a green pea variety with small, round seeds and good bleaching resistance. Also, it has an intense green colour, which should fit well into rehydration and canning markets. Certified seed of CDC Pluto should become available in 2014.

Breeder seed of CDC Limerick (2336-1) was released for the first time in 2012. CDC Limerick has had strong yield performance in Saskatchewan regional trials over the past two years with mean yield (when compared to Cutlass) of 108 percent in the south and 114 percent in the north. CDC Limerick has nice seed traits, but with a greater protein concentration than other green or yellow pea varieties. This may provide an advantage in fractionation markets.

CDC Mosaic is a new maple pea variety, which is a similar seed type to CDC Acer, but with improved lodging resistance. Certified seed of CDC Mosaic should come available in 2014.

Breeder seed of the dun pea variety CDC Dakota was first released in 2010. It has been one of the top yielders in the SK regional trial in 2010-2012. The dun type would typically be dehulled and sold in human consumption markets in India. Certified seed of CDC Dakota should become available in limited quantities in 2013.

P0609-08 is a semi-leafless, high yielding and powdery mildew resistant maple pea variety. In a replicated yield trial in 2011, P0609-08 yields were 28 percent higher than CDC Acer, and six percent higher than Courier. P0609-08 had significantly better lodging resistance than CDC Acer and Courier. The seed size of P0609-08 was larger than that of CDC Acer, but smaller than the seed size of Courier. P0609-08 matured at approximately 100 days, the same as the check varieties. It is undergoing Pedigree Seed production, and is licensed to Wagon Wheel Seed Corporation.

CDC Leader was released to Select growers in 2011. The average seed weight of CDC Leader is around 390 to 400 grams per 1,000 seeds (nine- to 10-millimetre diameter). CDC Leader is an earlier maturing cultivar than CDC Frontier. It has fair resistance to ascochyta blight. CDC Leader so far had consistently high yield, comparable to CDC Frontier, on both Brown and Dark Brown soil zones.

CDC Orion and CDC Alma were released to select growers in 2010. CDC Orion is a large seeded (10- to 11-millimetre-diameter) kabuli cultivar. CDC Orion has a good adaptation on both Brown and Dark Brown soil zones of southern Saskatchewan and southeastern Alberta. CDC Orion is on the late side on maturity, similar to CDC Frontier.

CDC Alma is a medium to large seed size (nine-millimetre-diameter) kabuli, slightly larger than CDC Frontier. CDC Alma has the higher end of fair rating for ascochyta blight, similar to CDC Luna. Growers should monitor their fields diligently for disease and spray if necessary.

A limited amount of seed for a new desi cultivar, CDC 603-3, will be available to select growers in 2013. CDC 603-3 has a light tan seed coat colour, which is one of the desirable visual seed characteristics of desi. The long-term, five-year yield average of CDC 603-3 is 110 percent of the check cultivar (Amit) on both Brown and Dark Brown Soil zones. The average seed size of CDC603-3 is 306 grams/1,000 seeds, with a long-term ascochyta score of 4.1. CDC 603-3 has a medium to late maturity range similar to CDC Vanguard.

CDC Greenland is still the most widely grown large green lentil (about 50 percent of the acres). Its superior colour retention can result in premiums. The older large green varieties are pretty much gone. The imidazolinone-tolerant large greens like CDC Improve (20 percent) are gaining ground but not necessarily in areas where Group 2 resistant weeds are now a problem – many are in the longtime lentil-growing regions south and west of Saskatoon. CDC Impower is still in the ramping up stage (about five percent). All others have declined to five percent or below of large green acres.

Breeder seed of CDC Greenstar (formerly known as 3339-3) will be available in the spring of 2013. The winter and summer increases were successful so there will be no shortage of seed. This line consistently outyields all other large green lentils and so far is rated at 105 percent of CDC Maxim. Head to head with all the other large greens, based on about 60 trials in total over the past four years, the variety has the potential for a minimum increase in yield of 10 percent. It has better anthracnose resistance ratings than all other large greens. The seed is larger than most other varieties, slightly smaller than CDC Improve.

Other greens and specialty lentils

CDC Asterix is an up-and-coming extra-small green variety with seed about 20 percent smaller compared to CDC Viceroy. It is a conventional type with some possibility for specialized marketing in specific regions.

In 2013, The CDC plans to release breeder seed of the conventional French green variety CDC Marble in 2013 (yield is 119 percent of Maxim so far) and possibly 3592-13 small green (110 percent of Maxim). CDC Marble consistently outyields all other lentil lines regardless of market class and the CDC is using it to establish a new higher yielding genetic base for all market classes. All varieties are on track for conversion to imidazolinone tolerance.

New varieties like CDC Dazil (CL), CDC Imax (CL) and conventional varieties like CDC Redcoat, CDC Redcliff, CDC Redbow and CDC Rosebud are grown on a very limited scale right now because they were released after CDC Maxim. As growers try them out, local performance will determine which of these become more widely grown. The CDC recommends that growers pay attention to what performs well in their area. From previous experience, in a drier cycle, red lentil performance can shift to favour the longer-season varieties.

CDC Scarlet (small red) and CDC Rosie (extra small), both conventional types, show some promise. All have high yield potential and good lodging tolerance. All promising conventional varieties are in the process of conversion to imidazolinone-tolerant varieties. 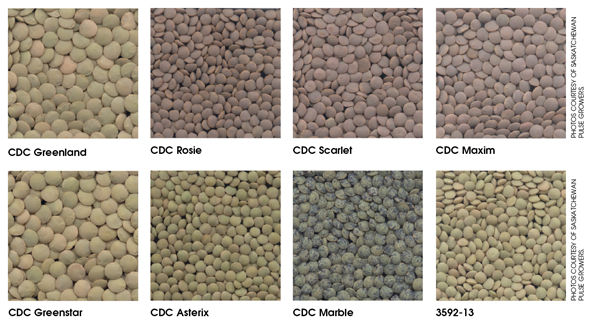 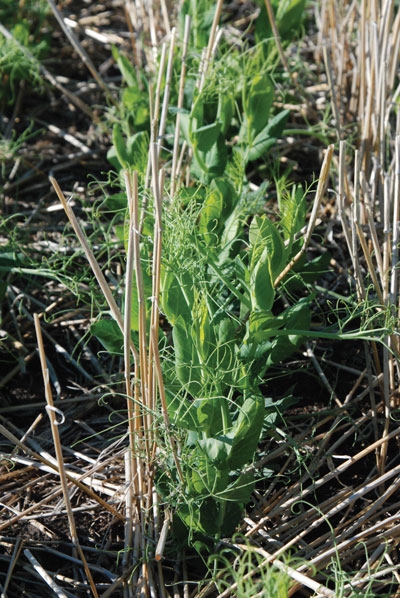