Through efforts on many fronts, a crop originally from east Africa is approaching commercial production in Western Canada. The crop is Brassica carinata, called carinata or Ethiopian mustard, and it is a cousin to canola that’s suited to the hotter and drier parts of the Prairies. It is being developed as an industrial oilseed, with a wide range of potential uses including as a feedstock for bio-based jet fuel.

Breeding a crop with its own niche
The crop first came to the attention of Dr. Kevin Falk, an oilseed breeder at the Saskatoon Research Centre of Agriculture and Agri-Food Canada (AAFC), in the 1990s. At that time, Getinet Alemaw, an Ethiopian who was then a graduate student at the University of Saskatchewan, was working on developing the species into a canola-type crop for Ethiopia.

As a potential crop for Western Canada, Ethiopian mustard offered both advantages and disadvantages. “It produced well. It was very heat- and drought-tolerant, and relatively large-seeded compared to Argentine canola, for example, which was a bonus for the hotter, drier areas in that you could seed deeper. And it was quite resistant to the diseases that were prevalent in the canola-growing areas,” explains Falk.

However, a major disadvantage was that its maturity was two to three weeks later than that of Argentine canola. Falk says, “[From field testing,] it was apparent that if we could develop early maturing lines that were closer to the maturity of Argentine canola, then we would have a good shot at developing a species that would move oilseed production in Western Canada into the Brown soil zone, a droughty region [in southwestern Saskatchewan and southeastern Alberta] that’s typically grown to wheat or just pasture.”

So, when Falk started his conventional carinata breeding program in 1995, his first goal was to reduce the days to maturity. Within about two or three years, he managed to bring the maturity down to about 107 days without sacrificing yield.

Next he had to decide whether to try to make carinata into another canola-like crop or develop it as a crop with its own niche. Falk says, “The route to developing another canola would have taken 10-plus years, if we could get there at all.” For instance, to turn it into an oilseed for food uses would have required reducing the high levels of anti-nutritional components, including erucic acid and glucosinolate compounds. However, those same components can be useful for certain industrial purposes. Another factor in his decision was that other researchers at Saskatoon were already developing Oriental mustard (Brassica juncea) into a canola-like crop for the Brown soil zone.

So Falk decided to develop carinata as an industrial oilseed crop. Since then, he has made many improvements, with funding support from Mustard 21 Canada Inc., beginning in 2008, and from other sources such as the Saskatchewan Agriculture Development Fund (ADF).

For example, he has increased the oil content of the seeds from around 30 to 44 percent and modified the oil’s profile so it is much more suited to various industrial uses. As well, his elite strains are higher yielding than Oriental mustard, and have strong resistance to lodging and excellent resistance to blackleg. He also has lines in his program with resistance to alternaria and lines showing promise for resistance  to clubroot, in preparation for when that disease becomes an issue in the Brown soil zone.

Falk notes, “I’ve developed a number of good strains that will get us through about the next three to five years, perhaps, but the next step is to get the yields up closer to Argentine canola. That means we need to go the hybrid route, and we’re well underway with that.” He hopes to have his first carinata hybrids available for trialling by about 2015.

Growing carinata
Another key to transforming carinata into a successful crop is development of an agronomic package for growers. Eric Johnson, a researcher with AAFC at the research farm in Scott, Saskatchewan, is working on that, with funding support from ADF, Mustard 21 and Growing Forward.

Johnson has already investigated nitrogen fertility and seeding rates for carinata. “We have found that the nitrogen requirements to maximize yields of Brassica carinata are similar to those of other Brassica species; they are pretty well the same as canola. So if farmers soil test, they can just follow the recommendations for canola,” he says.
He adds, “We haven’t done any work with sulphur on carinata yet, but based on some of our observations, we think the sulphur requirements would be similar to those for canola.”

Carinata can be seeded at about the same depth as canola. It is a vigorous crop with highly branching growth. It is tolerant of both disease and aphids. Carinata doesn’t require swathing; it is easy to straight combine and is quite shatter-resistant.

Johnson’s current carinata work focuses on weed control. He has already identified several herbicides that carinata will tolerate, and he is working towards obtaining minor use registrations for Muster, Assure and Lontrel. In the longer term, the aim is to develop carinata with resistance to broad-spectrum herbicides. He notes, “We’re working on several options, including seed mutagenesis and some experimental approaches, to try to develop some herbicide resistance within the crop.”

A new crop and an emerging market
AAFC is partnering with various other agencies to develop uses for carinata. The oil has the potential to be used in diverse industrial products, including lubricants, biofuels and bioplastics, and examples of possible uses for the meal include high-protein fish feed and bio-pesticides. Falk notes, “The idea is to find a use for everything to help make it commercially viable.”

One of those industry partners is Agrisoma Biosciences Inc., a private Canadian biotechnology that specializes in industrial crops. “Our proprietary technology, called ETL [Engineered Trait Loci], allows us to put multiple traits into a plant in one cycle and to get very high expression rates and a very stable transformation, which allows faster product development,” explains Patrick Crampton, Agrisoma’s vice-president of business and product development.

Of course, to apply this technology, the company needs a crop platform – a crop to improve – and a source of traits to move into the crop. Carinata offers a great platform because of all the work AAFC has already done to develop the crop as an industrial oilseed for Western Canada. For a source of traits to further improve the crop, Agrisoma is partnering with the National Research Council’s Plant Biotechnology Institute in Saskatoon.

Agrisoma is currently developing carinata as a feedstock for biofuels, including biodiesel and the emerging bio-jet fuel market.

Crampton explains the bio-jet fuel market took a big step forward in July 2011 when the agency responsible for setting fuel specifications worldwide approved the use of up to a 50 percent blend of bio-based fuel in jet fuel. As well, the International Air Transport Association has stated goals to achieve carbon-neutral growth by 2020 and to reduce net carbon dioxide emissions by 50 percent, compared to 2005 levels, by 2050. The use of bio-jet fuel from non-food sources will be an important part of meeting those goals. Demand for bio-jet fuel could result in global production of billions of litres of jet fuel from various bio-based feedstocks in the coming decades.

Agrisoma is using its ETL technology to add traits in three areas: “to improve carinata yields, improve the oil content in the seed, and further enhance its oil profile to get even better conversion efficiencies with different biofuel processes,” explains Crampton. The company hopes to have its first enhanced carinata lines available in about four years.

To commercialize carinata as a bio-jet fuel, Agrisoma has been building a network of partnerships along the value chain. For instance, it is partnering with Mustard 21 and AAFC on crop production, Paterson Grain on production contracts, POS Bio-Sciences on crushing, and jet fuel manufacturers on producing the fuel to aviation specifications.

In 2011, Agrisoma had about 50 acres of pilot production in Saskatchewan, on two farms and at the Scott Research Farm. Crampton says, “We were able to harvest and crush enough oil to work with two major bio-jet fuel manufacturers to get bio-jet fuel made from carinata oil. One of those manufacturers will be supplying enough jet fuel for multiple test flights to prove this made-in-Canada, ‘farm to fly’ fuel source.”

Crampton says 2012 will be “an introductory year” for carinata production. The crop will be grown on a contract basis, and Agrisoma hopes to have contracts with about 50 growers this year. “We want to have 5,000 to 10,000 acres, with a maximum of a quarter section per grower to spread out production across southern Saskatchewan and southern Alberta and get as much grower experience as possible.”

He adds, “The agronomics for carinata production are very similar to those for canola and mustard, but as we scale up production, we’ll learn new things, so we’re working closely with growers to understand how to grow the crop better.”
Trevor Anderson, a seed grower near Frontier, Saskatchewan, in the southwestern corner of the province, will be helping out with that. He is one of the few people in Western Canada who have grown carinata for multiple years. Even so, his experience is limited.

He explains, “I first grew carinata in 2010, and I grew only 2.5 acres because that’s all the seed that was available. It got hailed out on July 2. It came back unbelievably well – it’s more like canola in that respect. In 2011, I grew 20 acres because that was the maximum amount of seed available. And that year, we had the most unusual weather we’ve had in probably the last 50 years. We had three feet of snow in the winter, and about a week in May where you could get in the field, followed by about a month of rain. We didn’t finish seeding until June 20, which is two months later than normal.”

Nevertheless, Anderson is excited about carinata. “I think there are a whole bunch of good things coming together for this crop. I’m familiar with growing Oriental mustard, which is common in our area, and this is going to be a better yielder than Oriental mustard in the drier, hotter areas. Also, there’s a huge demand for biofuels. Airlines are interested because they want to be seen as green. Carinata is considered to be greener because it is a non-food oil and it’s going to be grown in the Palliser Triangle, which is considered to be a marginal farmland area. And if there’s any problem in the world regarding the [petroleum] supply, it will make carinata biofuel that much more desirable. So it’s something that could increase fairly quickly if the price is there for the farmer.”

In 2012 Anderson will be growing carinata and multiplying seed for Agrisoma. He’ll also be talking to farmers who want to grow the crop and following up with them during the growing season to see how the crop is going and what they’ve learned.

A key challenge ahead for carinata-based jet fuel will be to achieve a smooth scale-up along the value chain. Crampton says, “As with any new industry, it’s the-chicken-and-the-egg scenario in terms of scaling up production of the feedstock source at the same time as you’re scaling up the facilities that produce the fuel.”

Crampton sees a very significant potential for carinata as a feedstock for bio-jet fuel and biodiesel. “There are millions of acres of opportunity for carinata for western Canadian growers and into the drier areas of the U.S.” 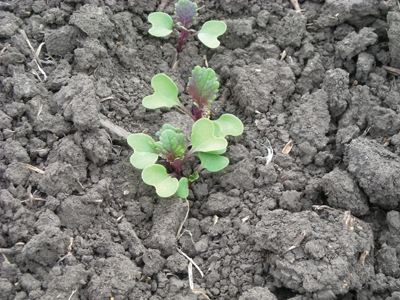 Carinata can be seeded at about the same depth as canola. Through efforts on many fronts
Print this page