Producers are always looking for improved varieties of crops. In the case of oats, that means traits such as increased yield, good groat percentage, disease resistance and good standability.

Thanks to work by researchers at the Ottawa Research and Development Centre (ORDC) – which has the only public oat-breeding program in Eastern Canada – producers in Ontario, Quebec and Atlantic Canada now have just that.

Developed by Agriculture and Agri-Food Canada (AAFC) research scientist and plant breeder Weikei Yan and his colleagues at ORDC, the new variety, AAC Nicolas, is being marketed by SeCan, a not-for-profit association of independent seed business members. It has high yield, good groat percentage, good lodging resistance and is resistant to crown rust and septoria.

“Nicolas has achieved 20 per cent higher yield than check cultivars in Quebec in the last three years,” Yan says. “Its groat percentage is the highest among high yielding cultivars and is equal to Dieter, which is currently the most favoured cultivar of the milling industry.”

Its straw strength, another important factor for growers, is also good, showing stronger straw than AC Dieter throughout research trials in Quebec and Ontario. It has a beta-glucan that is higher than the control cultivars Dieter and Rigodon. AAC Nicolas also has white, intact, and uniform groats – a new aspect oat breeders are starting to look at.

“In addition, it has good resistance to lodging and crown rust and performed well in Ontario, the Maritimes and Western
Canada,” Yan says.

“In the earlier generation, when we cannot select for yield directly, we select for the more easily selected traits that contribute to high yield,” Yan explains.

“Later, when we have enough seed for yield test, we select for grain yield, groat percentage and beta-glucan, oil and protein contents,” Yan says. “A superior variety has to be good or at least acceptable for all of these traits we look at.”

“Originally oats were mainly used as horse feed as there were many horses used as a source of power for transportation or farm activities. Horses have been dramatically reduced in the modern times; so have the oat acreage and production in Canada and worldwide.”

In the past two decades, oat has been increasingly used as human food as it became known that oat contains a large amount of dietary
fibre, particularly beta-glucan, that can reduce bad cholesterol and risk of heart disease and diabetes if a sufficient amount of oat-based food is included in the daily diet. Research shows 70 grams of oat meal or three grams of beta-glucan can have a positive effect.

“Our current oat program is supported by the oat milling industry to breed oat cultivars that are high yielding, so growers like to grow them; high groat content, so millers can make money; and high beta-glucan, so oat product can be sold as healthy food,” Yan says. “These three things do not go together, and it is our goal to put them together.”

Yan and his colleagues continue to pursue lines that have improvement over ACC Nicolas in some aspects. “The goal will remain the same as above, though people may work from different angles, such as molecular and genomics perspective,” he adds.

SeCan and ACC Nicolas
Phil Bailey, SeCan’s eastern business manager, says the association had Yan and AAC Nicolas on its radar for several years because of the variety’s tremendous yield potential versus other varieties in the same class. SeCan has a research agreement with the oat breeding program at ORDC through the Growing Forward 2 Program.

“One of our goals is to acquire rights to varieties through long-term research agreements,” Bailey says. “We fund the oat breeding program, get access to varieties and make them available to SeCan members who then multiply the seed and make it available to all farmers in
Eastern Canada. We do the promotion for it, create the seed guide and help sellers sell it.”

“There are different end uses for oat milling markets such as Quaker oats and horse feed markets,” Bailey says, adding Quaker has done initial testing on AAC Nicolas to evaluate its quality and it is showing great promise.

“Everything so far looks positive. Quaker and Weikei work closely as well and Quaker will analyze small amounts of seed, then evaluate on a bigger scale.”

SeCan distributed high pedigree seed to its members in the spring of 2015 so they could multiply it. “Several produced it and were very happy with its performance,” Bailey says.

This season, SeCan members will once again bulk up the seed hoping to make it commercially available on a large scale to all growers in 2017. 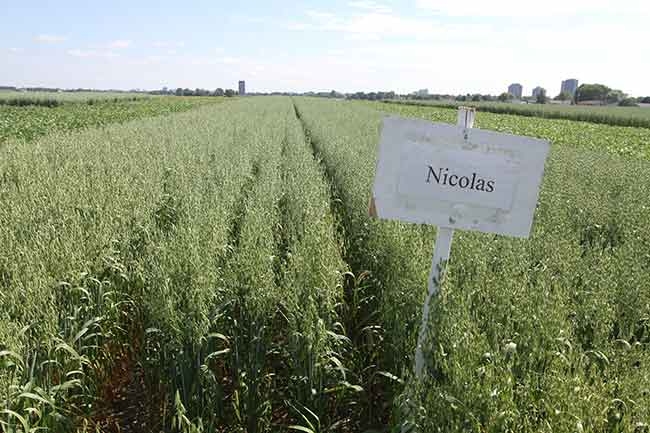 Scientists at the Ottawa Research and Development Centre have developed AAC Nicolas Producers are always looking for improved varieties of crops. In the case of oats
Print this page


Related
There’s a new weed in town
Who drives to town?
New soybean variety update for 2017
New canola variety in trials this summer