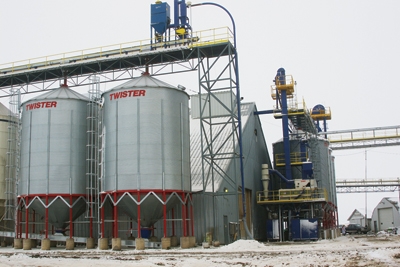 The CanPro plant can take green canola seed to process into feed quality oil. In the heart of canola country

In the heart of canola country, canola producers have a new market for their crop. CanPro Ingredients Ltd, located on the outskirts of Arborfield, Saskatchewan, about 265 km northeast of Saskatoon, is a canola crushing plant with an added twist. The plant is the first of its kind anywhere producing products from all parts of the canola seed. “We can buy either No. 1 canola, or we can buy up to 80 percent green canola, which is usually sample canola,” says Francis Rodier, CanPro’s chief executive officer.

Generally, canola crushing plants do not want green canola; the chlorophyll that gives green seed its colour can create problems when it comes to processing. Processing will remove the chlorophyll along with the oil, but it will impart a dark colour to the oil, which is difficult and expensive to remove. High levels of chlorophyll are also linked to increased oxidative rancidity and difficulties in hydrogenation. But the chlorophylls do not affect the protein in the seed, Rodier explains. Since they attach to the oils rather than the protein, they will come out in the oils and can be sold and used in a biodiesel stream where they are not an issue. The cool, wet summer experienced in northeast Saskatchewan in 2010 will probably produce a fair amount of green canola, he says.

No leftovers, no waste
With its total seed approach, the plant produces extra virgin canola oil, feed grade canola oil, high protein alfalfa pellets and canola protein concentrate. The concentrate is targeted for use as a high-value protein for farmed fish and also for piglets. Canola protein is extracted and rendered insoluble while soluble anti-nutritional factors are washed from the protein.

The result is a concentrated product, recommended at five to 30 percent as a replacement for more expensive protein sources such as fishmeal and for Phase 1 and Phase 2 swine starter diets.

Animal trials in Atlantic salmon, rainbow trout, shrimp and starter swine have supported the nutritional value of the product as a source of digestible amino acids, minerals and energy.

The protein concentrate has been selling well to fish farms and pig producers, Rodier says. Another advantage of canola protein is that it has very high energy compared with feeds such as corn. The amount of protein in corn is about the same as canola, around 60 to 65 percent, but the energy or calories in the canola concentrate is about three times higher.

Feed grade oil produced by the plant can be mixed into feed rations for cattle and poultry. Some of it has been sold for biodiesel in US markets and some to the forest industry where it is used as a biodegradable dust control product. CanPro products are marketed nationally and internationally, from hog farms in Alberta to fish farms in Chile.

The alfalfa connection
In the 1970s, an alfalfa dehydrating plant was built on what is now the CanPro site. The area is still a prime alfalfa producer, and CanPro is still buying alfalfa, making it into pellets and boosting protein with leftover material from its other operations. “When you produce canola protein and oils you end up with syrups and the hulls of canola seeds, and it has a fair amount of protein left in it,” Rodier says. “We pump that out into our alfalfa. This product is called
Alfalfa Plus.”

Besides producing another product for the plant, this approach effectively deals with material that would otherwise have to be marketed to a feedlot or dumped in a lagoon. “It’s a good fit with the two products going through here,” he adds.

In 2010, the Arborfield plant purchased alfalfa from 15,000 acres and it will be buying canola year round, about 2000 tonnes a month. “We pay market prices to producers depending on how much we want,” says Rodier. “On green canola there’s a discount.”

On the other hand, higher protein canola will bring growers a premium.

In spite of a less-than-ideal year for growing conditions, protein levels were high in 2010. In 2009, when crops remained in the field through October and were finally harvested in November, those levels were very low. Growers can be paid on a November basis or opt for the street price and receive a cheque shortly after delivery.

During October 2010, four months after it was commissioned, the plant was running at about 80 percent production, says Rodier. “We’re working on upgrading, installing a new and faster protein pump and also a water tower. We’re doing some upgrades to increase our production and get better quality products. We’re basically the first plant out there doing this. There’s no one else right now producing protein at this level.”