Soybean research by the Manitoba Pulse and Soybean Growers (MPSG) has been steadily increasing over the past five years. In that time, the province has seen a significant increase in acres of the crop, from 587,000 acres five years ago to 1.35 million acres in 2015.

According to Kristen Podolsky, MPSG production specialist, growers had a really positive experience with soybeans in 2015, “and there’s probably going to be an increase next year. We likely set a new provincial record for soybean yield in 2015, attributed to a warm growing season with good moisture distribution and an open fall.

“As the acres have increased in the past five years, so has our investment in research,” Podolsky adds. “Now we’re starting to see the results and interpret them into new production recommendations.”

Seeding rates
“Plant population is one area where [we] are starting to make new recommendations,” she says. “We didn’t know how they would perform with our climate, soil type and our residue when they first came to Manitoba. Now we are starting to zero in on what provides the highest economic return.”

But the highest population may not provide the highest net return. “We are finding that, with current markets and seed costs, the best target population for soybeans is about 140,000 plants per acre. When you’re checking fields a few weeks after seeding, that’s how many live plants you want in the field.”

Row crop planters have better seed distribution and seed depth placement than air drills. With more controlled planting, there is better germination, survival and emergence. “We’ve found that farmers who were using air drills tended to have about 70 per cent survival. So, we suggest those growers start with a seeding rate of about 200,000 seeds per acre in order to land somewhere around 140,000 plants per acre,” Podolsky says. “Usually, the survival rate in our on-farm trials for farmers who used planters is about 80 per cent. So, growers who use planters usually can use a little lower seeding rate, usually about 175,000 seeds per acre.”

Podolsky notes the industry expected numbers like this to emerge. Now it serves as a Manitoba-based baseline for recommendations. “The really new information is still in the works,” she says. “We’re trying to look at interactions between factors that happen before and at seeding.”

Fungicide trials
“We have done 21 on-farm trials over two years with and without fungicide, and now have some of the answers we need,” Podolsky says.

“The difference in yield on average is about 1.1 bushels per acre. When we think of the cost per acre of the fungicide and the application, this only provides an economic return for growers about three out of 21 times (about 14 per cent). The odds are not in our favour for that,” Podolsky notes.

Fungicides mostly target leaf diseases as the canopy closes, in mid-summer and later. The good news is these leaf diseases seem to have very little yield impact. “We really don’t see a lot of pressure from diseases such as septoria brown spot or downy mildew. Bacterial blight is also very common but this cannot be managed with a fungicide. That’s why we aren’t necessarily seeing a yield benefit from a fungicide application,” she says.

Sclerotinia could be an important disease for soybeans, and it looked like the 2015 growing season would see a major sclerotinia outbreak. July was warm. Conditions were wet. “When we went into fields doing disease surveys in late August, we really didn’t see the disease levels we expected, based on the moisture we had received. It was good news, very good news,” Podolsky says.

“I think a lot of growers across the province were surprised. Soybeans are naturally more tolerant to sclerotinia compared to canola and other broadleaf crops. And, while it was very moist for sclerotinia, it also was too hot at times. Sclerotinia favours cool and warm temperatures, but not hot,” she says.

Inoculation strategy
Double inoculation, on the seed and in the furrow, has been a standard recommendation for Manitoba’s soybean industry, to ensure the crop has adequate nitrogen-fixing bacteria. After compiling three years of on-farm data, in late 2015 the MPSG realized fields with a history of two previous well-nodulated soybean crops were not responding to the additional in-furrow inoculant.

“Fields with at least two previous soybean crops are only getting an economic response to the additional in-furrow inoculant about three out of 26 times,” Podolsky says. “With the previous soybean history, there is enough rhizobium in the soil that we don’t need to continue double-inoculating.”

In thinking about that change – saving about $12 to $13 an acre – Podolsky suggests growers ponder these questions: Has the field had at least two crops of soybeans? Has the most recent soybean crop been within the past three years? Have the previous crops been well inoculated? Has that field had flooding recently?

“If the previous crops have been well nodulated, if the most recent was within three years, and if the field hasn’t seen flooding, then you probably can skip the in-furrow inoculant in that field,” Podolsky says. “Seed applied inoculant is a lot more cost-effective.”

She adds, “In the U.S. soybean belt, many growers are not inoculating at all. We aren’t there yet. We do need to inoculate, we are just trying to identify the most economic strategy for farmers.”

Rotations residue
Using Manitoba crop insurance and some preliminary research data, Podolsky is convinced the best management practice for crop rotation is to put soybeans on a cereal crop residue, to break the disease cycle. But there is a short-term alternative to consider: a portion of the soybean crop is planted on soybean or canola ground.

If there is a trend, from looking at early research, soybean yields on canola and soybean residue tend to be less consistent than yields on corn and wheat residue. And, some site-years show a significant yield penalty for the tight rotation.

“Farmers are experimenting with their own management on things like rotation, stubble height, strip tillage, vertical tillage and no-till. It’s difficult to do research on this, because conditions are unique between regions and within fields, but we have had a good start in 2015 on answering some of these questions,” Podolsky concludes. 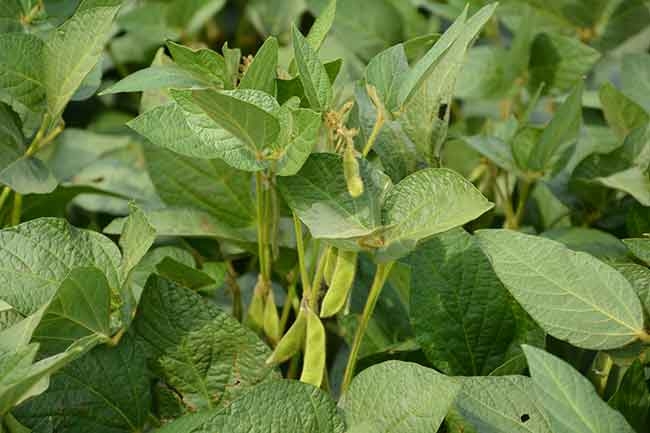 Soybean yields on canola and soybean residue tend to be less consistent than yields on corn and wheat residue. Soybean research by the Manitoba Pulse and Soybean Growers (MPSG) has been steadily increasing over the past five years.