While these products and companies ushered in the era of selective weed control, many are now historical footnotes. But driven by the rise of herbicide resistant weeds, some products are having a renaissance of sorts. In particular, Avadex BW (1962), and Edge (1987) are receiving renewed interest.

“Growers are looking for creative ways to get different herbicide groups into their herbicide rotations,” says Brian Wintonyk, agronomy leader with Dow AgroSciences in Calgary, Alta.  Dow AgroSciences was originally known as DowElanco and began in 1989 as a joint venture between the agricultural products business of the Dow Chemical Company and the Elanco Plant Sciences business of Eli Lilly and Company. The company was renamed in 1997 when Dow acquired 100 per cent ownership of the business.

The original market for Edge was as a replacement for Treflan in canola, providing improved weed control in a granular formulation that was more fitting with the move to reduced tillage. The era of herbicide tolerant canola displaced Edge, but it hung around for use in conventional canola production, and other pulse and oilseed crops. Now with Group 2 resistance weeds common on the Prairies, Edge is making a comeback in pulses such as lentil, chickpea and field pea, as well as a base application in herbicide-tolerant canola to simplify spray timing, reduce or eliminate early season weed competition, and to provide season-long control of flushing weeds.

“The original use pattern for Edge was as a soil-incorporated herbicide in conventional tillage systems that required two fall or spring incorporations to a depth of three to four inches,” Wintonyk says. “Edge has a good fit in no-till seeding, and we’ve been working to provide sound recommendations for its use in no-till.”

Wintonyk says getting good performance from Edge in no-till relies on an understanding of how the active ingredient works. Edge controls weeds as they germinate – the weeds must germinate in the Edge-incorporated layer. If they germinate below the layer, they will not be controlled. However, he explains that in no-till fields, the weed seeds become concentrated in the shallow surface layer and only a shallow incorporation of Edge is required.

“A light harrow operation in the top layer provides enough incorporation to have Edge in the same soil layer as the weeds. If you do more tillage, there will be weeds below one-quarter inch deep, and they won’t be controlled,” Wintonyk explains. “Edge can be effective if you have been direct seeding the last two years with less than 30 per cent soil disturbance during seeding.”

In the spring, Edge is activated by warming soil temperatures. Wintonyk says it doesn’t activate early enough to control early germinating weeds before seeding, and that a pre-seed burndown should be conducted. He also cautions growers should be aware there are different rates for fall and spring application.

While the weed spectrum is wide, covering both grasses and annual weeds, Wintonyk cautions Edge provides suppression of wild oats. In cleavers, it provides control in no-till, but suppression in conventional tillage.

Avadex makes a comeback
Back in the 1960s and early 1970s, Avadex (triallate, Group 8) was one of the go-to products for wild oat control in wheat and barley. Avadex is incorporated into a shallow surface layer and wild oats are controlled as the growing point of the weed grows into the treated layer. Avadex is registered in two formulations: a liquid emulsifiable concentrate as Avadex BW, and Avadex MinTill, a 10 per cent MicroActiv granular formulation.

“With surface application of Avadex MicroActiv on the label, farmers are getting it back into the herbicide rotations for wild oat control,” says Mike Grenier, research and development manager with Gowan Canada in Winnipeg, Man. Gowan now has the marketing rights to Avadex in Canada.

Grenier says zero-till stubble is the perfect target for Avadex MicroActiv granules because weed seeds are near the soil surface. The granules provide 50 per cent better coverage than the old 10G original granules, and help to provide good granule-to-soil contact. He says if stubble is matted, it should be harrowed prior to application to spread out the straw.

A fall application of Avadex MicroActiv should be made to standing stubble or chem-fallow fields. The field can be harrowed in the fall, or incorporation can be left until spring if the soil is cool (less than 4 C) and within three weeks of freeze-up. Spring harrow incorporation is recommended prior to seeding, and if weeds are emerged, then a pre-seed glyphosate burndown is also recommended.

For liquid application of Avadex BW, the soil must have less than 30 per cent trash on the soil surface with incorporation no deeper than five centimetres and completed within 24 hours.

Grenier says Avadex fits with an integrated approach to herbicide resistance management that uses multiple modes of action. He says a pre-emergent herbicide followed up with a post-emergent application of a different Group can help delay herbicide resistance. While Group 8 resistant wild oats have been confirmed in Western Canada, the distribution and frequency is nowhere near the occurrence of Group 1 and 2 resistance.

Gowan is looking at research trials to better understand how Avadex and Fortress might fit into weed control strategies. Grenier says research at North Dakota State University in 2006 found that Avadex followed by a post-emergent herbicide provided the best wild oat control and improved yield as compared to post emergent program alone. Gowan is looking at Canadian trials to better understand this strategy.

Another trial is looking at a MicroActiv formulation for Fortress that would allow easier use in min-till situations. Research in Manitoba in 2014 found that Fortress in front of Liberty Link canola provided better wild oat control. Fortress was also providing suppression of kochia, holding back the weed until a post-emergent herbicide could provide control. 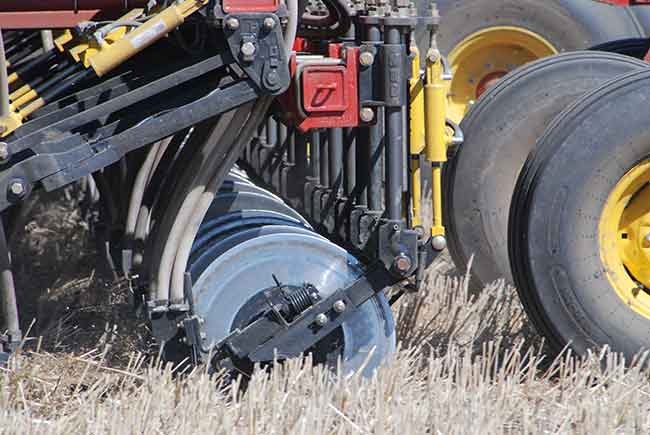