Farmers in the Norfolk sand plain region of Ontario are seeing improved crop yields, thanks to technology that is new to the area. Subsurface drip irrigation irrigates crops via polyethylene drip tubes installed a foot or more underground. This low-pressure, high-efficiency system eliminates surface water evaporation, and reduces the incidence of weeds and disease. And it can increase crop yields.

It made sense, then, when a nearby broiler and hog operation, Judge Farms, experienced a complete corn crop failure on one of their farms in La Salette the same year and decided they needed an irrigation system, that they would consider a subsurface drip irrigation system. With the knowledge of the trial on Blake Farms, Jim and Robert Judge, owners of Judge Farms, and their farm manager, Todd Boughner, compared the cost of setting up an overhead system – in their case a hard hose traveller – to a subsurface drip irrigation system.

“They felt the cost was going to be comparable for a complete new system of either [an overhead system or a subsurface drip irrigation system]. But the advantages of lower labour and energy costs once installed; the ability to irrigate anytime, day or night, windy or calm; the ability to fertigate throughout the season; and claims of a minimum of 25 per cent better water use efficiency swayed them to install the subsurface drip system in late 2012 and early 2013,” White says.

It was perfect timing for White’s Simcoe Research Station colleagues, John O’Sullivan, a professor in the department of plant agriculture, and research technician Robert Grohs. In early 2013, they received funding from Farm & Food Care Ontario for a Water Resource Adaptation and Management Initiative project.  The idea was to establish 10 plots with an individually controlled, subsurface drip irrigation system, and to monitor the crop at Judge Farms. Others involved in the research included Rene Van Acker, from the U of G, and Ray MacKenzie and Marc Vanden Bussche from Vanden Bussche Irrigation in Delhi, Ont.

All plots, including the subsurface drip irrigated corn fields at Judge Farms, were monitored in 2013 and 2014 for soil moisture, nitrogen (N) use efficiency and yields. The researchers also looked at corn quality on the 10 plots that were set up at the Simcoe Research Station. To do this, soil moisture stations were monitored to assess water depletion by the crop.

“Once soil moistures dropped below 75 per cent of available soil moisture, irrigation was triggered,” White says. “The amount applied was calculated based on evapotranspiration and crop growth stage. Fertility was applied preplant, at planting, sidedressed and through the drip lines, and monitored through tissue sampling.”

Over at the Simcoe Research Station, irrigated plots yielded 248 bushels per acre – a 10 per cent increase over the non-irrigated, White says.

“The yields for 2014 were, of course, affected by the amount of rainfall in the area and for sure the lower heat units,” he notes. “The majority of our [2014] rainfall came in July which is the most critical time for moisture stress, so the crop really wasn’t under stress much. We had 6.3 inches of rainfall in July.”

Implications
The researchers believe this technology will allow farmers to grow very successful field crops on soils that have, up until now, only been marginally successful year in year out.

“With the ability to fertigate later into the season, we feel we can obtain much higher yields while not endangering leaching of nutrients,” White says. “The water use efficiency of these systems is so much better than the overhead systems in use right now that we will be able to maintain high yields with less water, resulting in less [negative] effects on the environment.”

What’s next?
Future research plans will narrow the technology gap by focusing on the precise delivery of both water and nutrients. “We need to apply the right amount of both at the right time and not over apply either,” White explains.

Preliminary N fertigation work in 2014 indicates the potential to apply less N while still maintaining high yields. That work will be continued in 2015. “We will get more data on dripper line spacings and that will give us a chance to evaluate the returns we get for the costs involved,” White says. “All subsurface drip irrigation users will need time to gain the knowledge needed to use the system to the best of its ability and gain confidence in this technology.” 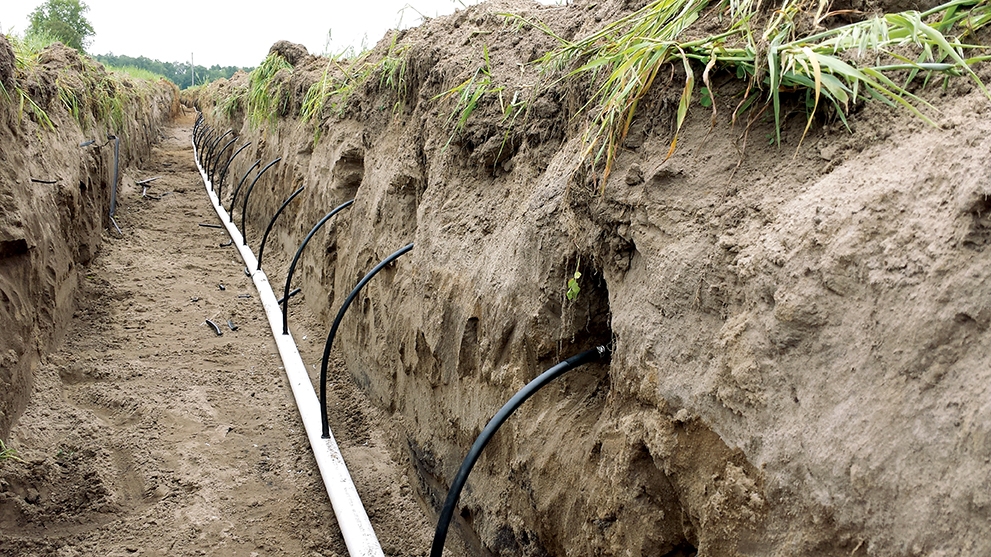