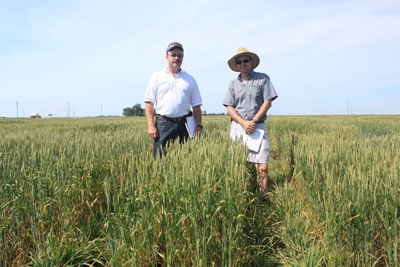 (L) Jim Downey There is a certain buzz these days as insiders talk about a new hard white spring wheat from Western Canada.

There is a certain buzz these days as insiders talk about a new hard white spring wheat from Western Canada. Interim registration was approved in February 2011 even before the variety finished the co-operative registration trials. It has very great potential, but is yet to be completely farm-proven. “It probably will be grown on 50,000 to 80,000 acres for the first two or three years, then we’ll evaluate what customers think,” says Jim Downey, SeCan research and development manager. “It could become a major variety for the hard white wheat class, but we won’t really know until we’ve done two or three years of testing.”

The product, designated as HW024 until an official name is released, is the third hard white wheat to date coming out of the Agriculture and Agri-Food Canada Cereal Research Centre in Winnipeg. Breeder Dr. Gavin Humphreys developed HW024 and is in charge of the hard white wheat program. “This is front and centre for SeCan right now. We’re looking at spending quite a bit of money to speed up the seed multiplication so we can advance the commercial introduction by one year,” Downey says.

Bread quality Sample results of the early material, tested at the Canadian Grain Commission (CGC), probably started the buzz. The new wheat produces nice white flour, and it appears that millers will be able to extract up to two percent more flour per tonne. “Millers look at that as money in the pocket. If they get one or two percent more flour, that’s great. It could be very popular,” Downey says.

The gluten in the flour also is very strong. It will need to be monitored, but it opens the opportunity for blending with other wheat flour that has less gluten strength.

Slightly higher protein in this flour is a third benefit. This gives HW024 an increased ability to absorb water. Increasing water content is a “cheap” way to make more money if the bread quality is not reduced.

According to Nancy Edwards, CGC research scientist and program manager of bread wheat research, white wheat with these qualities is a very good alternative for the whole-wheat bread market. She explains, “Dieticians or nutritionists would like to get more whole-grain products into people’s diets, but people generally don’t like them. A lot of consumers don’t like the darker colour or slightly bitter flavour you get with red wheat. Bread made out of whole white wheat has a creamy colour and less of the bitter flavour.”

Bakers need “very good gluten strength” in order to produce a good whole-wheat bread, and that has been a major challenge. In the most recent trials with HW024, Edwards says, the gluten strength was a match to CDC Teal, a very strong Canadian Western Red Spring (CWRS) variety. “I don’t think they (millers) would drop red spring wheat because it’s so easily available, but yes, in terms of milling, HW024 is absolutely comparable to a CWRS.”

Noodle quality
Dave Hatcher, CGC research scientist and manager for Asian products, has been working with white wheat since the inception of Canada Prairie Spring (CPS) white and hard white spring wheat programs. “White wheat is of particular interest in the Asian market, as it offers better colour to our products,” he says. “We are competing against Australian wheat.”

After seeing the performance of HW024 in his noodle laboratory, as well as results from the bread lab, Hatcher advocated for interim registration at the Prairie Recommending Committee for Wheat, Rye and Triticale (PRCWRT) meetings in February 2011, giving early permission to multiply the seed. It had two years of testing, but a third is required. “It (HW024) is a very good quality wheat. Most importantly, it has the strength characteristics we were looking for; much more so than the previous dominant line, Snowbird. This will make it a much more functional, dual-purpose wheat,” says Hatcher. “It can be used very comfortably for making bread, as it is much closer to the higher end of our traditional strength characteristics that a number of customers want. Also, because it is a white wheat, it will also work very well for making noodles without discoloration problems. We’ve seen none so far.”

The response of the new hard white spring wheat to weather conditions will be important in the market outcome. Hatcher notes that Snowbird “started like gangbusters” but performed poorly when harvest conditions were stressful. Processors then had trouble finding sufficient, good-quality material. “We particularly want to look at the environmental impact. Genetics is very important, but we have also found that the quality of the wheat will vary across Western Canada because it’s such a large area with so many growing conditions,” he says. “When we have sufficient material, then we will really be able to kick its tires and see all the potential it has. With this added gluten strength, it should have a great deal of potential.”

Ready for 2013
Commercial seed for the new variety can be anticipated for use in the 2013 crop season, according to Graham Worden, Canadian Wheat Board senior manager in technical services. The new wheat, at this point, is likely to be attractive to both growers and premium markets. “Asian countries typically pay a little more for that higher quality wheat,” Worden says.

“There’s also a big demand for white wheat for bread in North America. We have to see how well it grows and performs, but a better return for the farmer is possible.”

The first commercial acres in 2013 and 2014 probably will be contracted through Identity Preserved (IP) programs, he says. The IP approach enables the contractor to know how much is grown and where it is. With that knowledge, quality evaluations for customers also can be more efficient. “Ultimately, for this hard white wheat class, we’re looking for many varieties that will provide a wide range of adaptability throughout the Prairies. Then farmers will have a choice on what to grow. It will take time to build a pool of available varieties in this class, but this is a significant step. We’ve got high hopes for it,” Worden says.