At press time Distinct herbicide was in the final stages of registration. If registered in time for the 2012 chemfallow or post-harvest season, the new chemistry will be an important tool for managing herbicide resistance and improving broadleaf weed control.

Distinct has a combination of two active ingredients, diflufenzopyr, (Group 19), a new active ingredient to Western Canada, and dicamba (Group 4). Distinct will be used for chemfallow and post-harvest application when tank-mixed with glyphosate.

“Diflufenzopyr synergizes the activity of dicamba to provide improved weed control at lower rates of dicamba. When it is added to dicamba, we see two to three times the activity on weeds than dicamba alone,” explains Mark Oostlander, technical development specialist with BASF at Innisfail, Alberta.

Adding Distinct to a glyphosate chemfallow application provides a broader weed spectrum than glyphosate alone, with a higher level of control on larger weeds.  Because Distinct contains both Group 19 and Group 4 active ingredients, it will also control Group 2 and Group 9 (glyphosate) herbicide-resistant kochia.

“Kochia is on the label, and Distinct will control Group 2 and Group 9 herbicide-esistant biotypes of kochia,” says Oostlander.

Tank-mixed with glyphosate, Distinct herbicide complements control of all weeds on the glyphosate label, including kochia, Russian thistle, sow thistle, wild buckwheat, flixweed, round leaved mallow, cleavers and winter annuals.  Dandelion, Canada thistle and narrow leaved hawk’s beard are controlled using fall applications during September and October, and suppressed during spring and summer applications from May through August.

Distinct will be packaged as a wettable granule formulation with two 2.3-kilogram jugs per case. One jug will treat 40 acres at the standard rate or 20 acres at the high rate. The high rate is used when weed populations are dense, or weeds are large. The low rate must be used for post-harvest applications. For glyphosate-resistant kochia one to three inches tall, the standard rate is recommended; for glyphosate-resistant kochia four to six inches tall, the high rate is recommended. Merge surfactant must be included in the tank mix with glyphosate, no matter which glyphosate formulation is used.

Watch for announcements from BASF if Distinct is registered in 2012 for use on chemfallow. 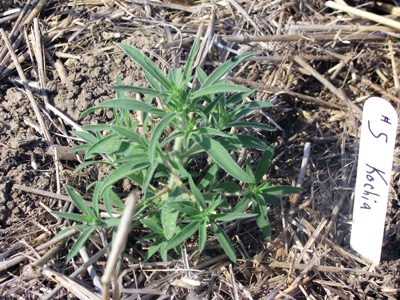 New Distinct chemfallow herbicide will control Group 2- and Group 9-resistant kochia. At press time Distinct herbicide was in the final stages of registration. If registered in time for the 2012 chemfallow or post-harvest season