Features Agronomy Fertility and Nutrients
Need for phosphate in Alberta

Optimizing crop production depends on providing adequate nutrients for crop growth. Next to nitrogen (N), phosphorus (P) is the second most limiting soil nutrient in crop production across the Prairies. Most prairie soils are relatively low in minerals that contain P, resulting in low plant-available P. Research shows that providing recommended fertilizer rates of P may improve crop uniformity and maturity, and optimize yields.

“Generally for wheat, barley and canola, about 80 percent of soils across Alberta will respond to phosphate fertilizer,” says Dr. Ross McKenzie, research scientist, agronomy, with Alberta Agriculture and Rural Development (AARD) in Lethbridge.

Soil testing using soil samples from the zero- to six-inch depth for P is important to determine the probability of a response from a fertilizer application. “The common soil testing method used in Alberta is the modified Kelowna method and is the one that our P recommendations are based on,” says McKenzie.

Growers in Alberta should select labs that use the modified Kelowna method, and if the lab does not then they should select an alternative lab. In Saskatchewan and Manitoba, the common method used for soil test calibration has been the Olsen method. McKenzie notes it works fine although in his Alberta research at 427 research sites it doesn’t correlate as well as the modified Kelowna method for predicting crop response to phosphate fertilizer.

“Most of our research work has shown that seed-placed P gives the best response because it is close to the seed,” notes McKenzie. “P is very immobile, so placing it close to the seed allows the plants to start taking up P very quickly after germination. The seed-placed P fertilizer can sometimes stimulate early crop growth and this is referred to as a “starter” or “pop-up” effect.”

Soil P is less available to plants when soil temperatures are cooler and plant roots also grow more slowly in cool soils. With many Prairie farmers direct seeding their crops earlier into cool soils, McKenzie strongly suggests placing P fertilizer as close to the seed as possible to ensure plant access to P. When P fertilizer is placed farther away from the seed, crop growth could be delayed due to a time delay for roots to explore and find banded P fertilizer. Plants take up much of their total P required earlier in the growing season.

Cereal crops, for example, will take up about 75 percent of their P requirements within 40 days after crop emergence. However, with seed-placed P, safe limits must always be observed.

The upper limit of seed-placed P for crops such as flax, mustard and canola is 15 lb/ac of actual P with a 10 percent seedbed utilization (SBU); for peas the upper limit is 25 to 30 pounds per acre; and for cereal crops it is 45 to 50 pounds per acre of P2O5 rates. Phosphorus requirements for optimum yields vary with different crops (see Table 1).

“Banding P with N in the fall or early spring is another option,” says McKenzie. “Growers have to be careful when banding P with N together just before or at the time of seeding, because N is mobile and will radiate out from the fertilizer band. If a high rate of N is applied, the plant roots may not grow into the band to take in P efficiently due to the higher concentration of N and the fact that P is not mobile and will not radiate out from the fertilizer band similar to N as it converts to nitrate-N.”

This can be a particular problem in some years on very low P soils and when soil temperatures are low following seeding, making the “starter” effect of P placed with or near the seed important. Splitting the application and seed-placing a portion of the P at 10 to 15 lb/ac P2O5, then banding the remainder, can be an effective option.

Ensuring adequate P is important, and can be even more so with certain crops in rotation. “Almost always, you will see a better response to P on wheat after canola than with wheat after wheat or wheat after peas,” says McKenzie. “As a general rule, canola is very aggressive at taking up soil P and there tends to be less plant-available P after a canola crop than would be in the same field after you grow wheat. Therefore, if you are growing wheat after canola, putting on an extra 10 to 15 pounds per acre of P2O5 may be a good idea even if the soil test looks adequate.”

Visually identifying P deficiency can be difficult and must be confirmed using soil tests and possibly with the aid of plant tissue analysis. “In our research plots comparing crops with and without P fertilizer, the plants without P look very similar in colour and appearance but slightly stunted in comparison,” notes McKenzie. “In severe cases of P deficiency, symptoms include characteristic stunting, purpling or browning, appearing first on the lower leaves and base of the stem and working upward on the plant, particularly on cereal crops. The effect is first evident on leaf tips, and then progresses toward the base. Eventually, the leaf tip dies. However, this is an extreme effect and would rarely be observed in farmer fields under good management.”

For optimum crop production, ensuring an adequate supply of P close to the seed during the first six weeks of growth and an adequate amount of P in the soil for the rest of the season is ideal. Because P is very important for early plant growth and timely maturity of crops, growers are encouraged to apply a maintenance application of P even when soil test levels are adequate (see Table 2).

“Even if soil test results using the modified Kelowna method are 60 to 80 pounds per acre and a yield response may be minimal, we still suggest a maintenance application to replace what the crop removes,” says McKenzie. “Ensuring adequate P will result in good uniform maturity, which improves harvestability and can help reduce the risk of early fall frost damage, particularly in shorter season areas.” 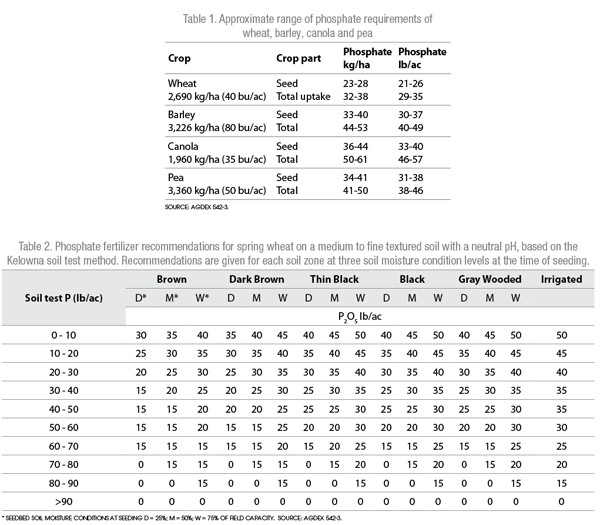 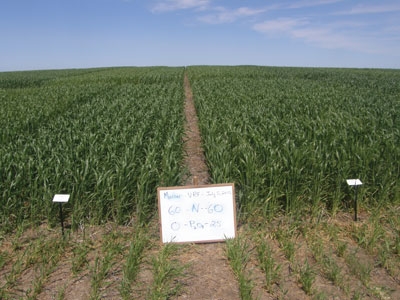