Using GxExM synergies to bridge the gap between yield potential and the on-farm reality. 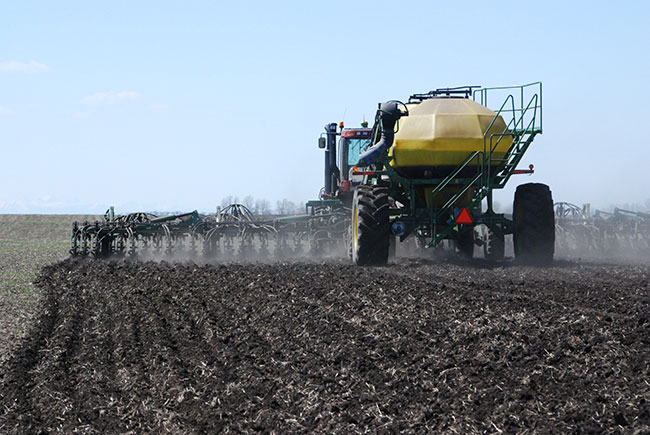 Ultra-early seeded wheat is an example of how management can enhance genetics and environment. Photo by Bruce Barker.

The building blocks of yield come in many shapes and sizes, and from many sources. Plant breeding, disease, weed and insect management, soil and water all contribute. However, a new approach to understanding yield is GxExM – that is, Genetics x Environment x Management. This integrated approach helps researchers, plant breeders and farm managers hone in on how to narrow the yield gap between yield potential and what is actually achieved on-farm.

“Our population is growing faster than our ability to grow more food. Climate change is also impacting our ability to grow food, so it’s imperative we have an understanding of how to make changes for what is expected to happen 15 years from now, which is easier said than done,” says Brian Beres, a research scientist with Agriculture and Agri-Food Canada (AAFC) in Lethbridge, Alta.

One challenge Beres points out is that crop production is still stuck in a silo mentality, where efforts to improve crop production aren’t shared between different sectors. For example, a research note from the United Kingdom suggests that 90 per cent of yield gains in their main agricultural crops since 1982 is due to breeding new varieties. That is a silo mentality that doesn’t recognize the contributions of other parts of GxExM.

“When you put the gains together, about one-half of wheat yield gains come from genetics and the other one-half from how we manage those genetics,” Beres says. “We have to look beyond what contributes more to how to identify the best synergies of genetic traits and the systems needed to capitalize on those traits. Some environments may require enhanced genetic contributions while others dictate a focus on management, but never is a complete disconnect sustainable.”

Identifying yield gaps
The GxExM equation identifies yield potential of the crop. In a year like 2021, environment had the greatest impact on yield, resulting from low rainfall and high solar radiation and temperature. Genetics are also very important, but these two factors are mostly beyond farmers’ and agronomists’ control, aside from variety selection. Where the yield gap can occur is with the management side of the equation. Fertility and insect, weed and disease management are all within a farmers control and need to be managed to exploit the varieties grown and what Mother Nature provides.

Reaching full yield potential may not be an achievable goal. A target of 70 to 80 per cent might be reasonable, but narrowing the gap above this threshold may not be cost-effective or environmentally sound.

The Global Yield Gap Atlas, an international organization covering 70 countries across six continents, hosts a database of yield gaps for 13 major food crops. The organization identifies the yield gap of major crops in Australia at 52 per cent, the Middle East and North African regions at 75 per cent, Argentina at 41 per cent and Northwest Europe at 25 per cent. Canada is not included in the project.

“I would argue that our yield gap is under 40 per cent for wheat, but we have yet to quantify it,” says Beres, who is part of a group of scientists who are working to develop a yield gap atlas for Canada. He says developing a yield gap atlas would help benchmark current yield gaps, and help guide research priorities and crop management initiatives. The initiative would rely on obtaining information on the many aspects of GxExM. It would require information from study sites based on climate zones, cropping systems, crop management and soil data. 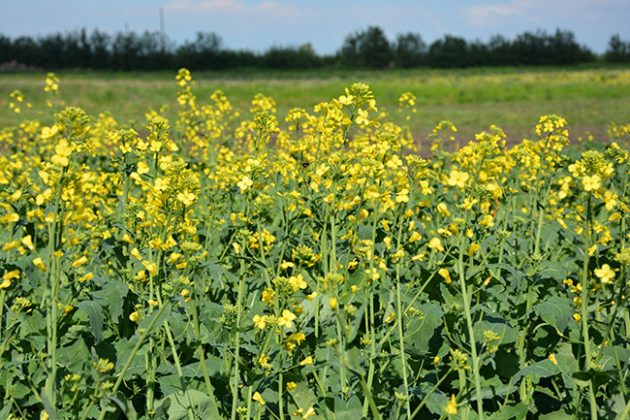 In a research study, Brian Beres found the highest canola yields came from the most diverse rotations, pointing to how management can help reduce yield gaps.
Photo by TOP CROP MANAGER.

Exploiting yield through management
Beres gives a couple examples of how management can be used to reduce the yield gap. In one research study, he looked at the effect of crop rotation diversity in a cereal-based cropping system. Various rotations of wheat, pea, canola, triticale and intercrops were compared. In the trials, cereal yield was the highest in the canola-cereal-pea rotation, followed by canola-cereal, cereal-pea and continuous cereals. Canola responded similarly, with the highest yields in the most diverse rotations.

In the same study, microbial biomass, measured in the triticale rhizosphere, was the highest in the pea-canola-triticale rotation, and declined as the rotation became less diverse.

Net returns were calculated and, in a medium to high productive environment, the canola-triticale-pea had the highest returns at $271 per acre. Triticale-canola was the second highest in that environment at $255 per acre, with declining returns from the less diverse rotations.

Another example of using management to increase synergies with genetics and environment is research conducted by Beres on ultra-early seeded wheat. The research found that grain yield was higher and more stable with ultra-early seeded wheat, with an optimal seeding rate of 40 seeds per square foot and a shallow seeding depth of one inch. Starting to seed when the soil temperature reached zero to 2.5 C resulted in six bushels per acre higher yield than when soils reached 10 C.

“I would argue that, in Canada, our ability to exploit yield is getting harder,” Beres says. “The objective of a GxExM approach is to understand how to weave all the components into a system that will flourish and be more resilient in the future.”