Consumers from around the world enjoy mung beans. Starch from the beans forms delicate vermicelli noodles and delicious moon cakes. Mung bean sprouts are added to chop suey, and the bean thickens up Indian dahl. Researchers in Western Canada are pinpointing the best mung bean varieties for the Prairie climate so that producers can access this market.

Researchers at the Greenhouse and Processing Crops Research Centre in Harrow, Ontario, developed the first Canadian mung bean variety over a decade ago. In 1997, Agriculture and Agri-Food Canada (AAFC) released AC Harosprout, a variety suited to growing conditions in Ontario. However, after registering AC Harosprout, mung bean research in Ontario went dormant for several years. That is, until 2008, when the industry pressed for more research into mung bean varieties suited for Canada.

“We saw more interest from the Japanese market, and they approached one of the seed companies in Ontario to ask for mung beans,” says Dr. Alireza Navabi, a research scientist with AAFC. The industry request kicked off a project to develop new mung bean varieties adapted to Ontario.

Canada’s climate poses a problem for a crop more at home in the tropical and subtropical regions of Asia than the Prairies. Mung beans need warm soil to germinate and a long frost-free growing season to reach maturity. Though the western Canadian mung bean industry is not close to commercialization, research is well underway.

Olson thinks that mung beans in Alberta will be confined to irrigated land in the southern part of the province. “Because of the value and quality that’s required, it will probably have to be under irrigation, in a drier climate. Because one of the uses is sprouts, you can imagine that if you put it into a wet area, and you got rain on it, the crop would sprout on you,” Olson explains.

In 2010, bean crops in southern Alberta were hit hard by poor growing conditions, and mung beans were no exception.  Olson says they lost their germplasm, and had to bring in fresh seed from the Asian Vegetable Research and Development Centre in Taiwan and India.

Some of the lines in Ontario have been struck by bacterial disease, and Alireza Navabi expects that disease will be a problem the industry faces if mung bean commercialization ramps up. “Mung bean is something that is new to Ontario. A three-year history of commercial production is not long enough for the pathogens to adapt to the host,” he explains.

Aggressive bacterial blight is a problem in Alberta too, especially when the seed is carried over from previous crop years.
“The fresh seed we brought from Taiwan and India didn’t have those levels of bacterial blight and did quite well this year,” says Olson, who adds they are working on building resistance in the lines.

Despite these issues, several varieties do seem suited to Western Canada. Dr. Deng-Jin Bing says they grew mung bean in Morden, Manitoba for several years and did not observe any significant disease.

This past summer, Bing says they grew three of the six lines studied in Morden, at AARD’s Crop Diversification Centre South (CDCS) in Brooks, Alberta. “The field had a history of bacteria disease of pulse crops, and all three of the lines were infected by the disease,” he says, adding that the exact nature of the disease has yet to be identified.

“We also observed significant difference among the three lines; that is, while two of them were severely infected by the disease, one of them showed much better tolerance. So while bacteria disease is a big concern for mung bean growers, some lines have shown more tolerance than others.”

Olson says the 2011 field trials in Alberta looked good as well, and he estimates that mung beans could yield roughly 1000 pounds per acre on irrigated land.

However, the mung bean market holds potential too. Market research conducted by Cheryl Davie revealed that in 2008 Canada’s import of mung beans totalled over four million kilograms, or close to nine million pounds, and was worth over $5 million. Between 2001 and 2007, Canada’s imports of mung beans doubled from $2.41 million to $5.04 million. 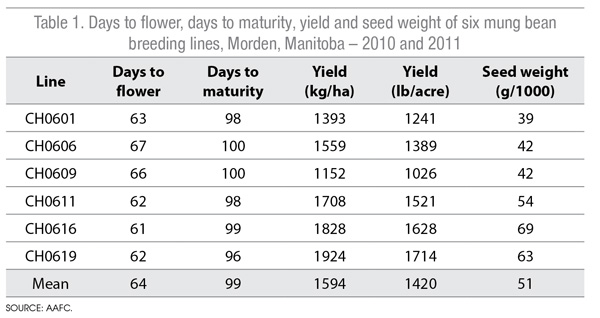 Consumers in the United States eat several million pounds of mung beans each year, nearly 75 per cent of which are imported, according to the Thomas Jefferson Agricultural Institute.

Mung beans grown in Ontario are targeted for export to Japan to be consumed as sprouts, and other Asian markets exist as well. The population in Asia is projected to grow by 1.5 billion people within the next 50 years, according to the United Nations Department of Economics and Social Affairs.

Olson and his team are working with Caudill Seed Company, a distributor of sprouting seeds based in Louisville, Kentucky. Caudill is trying to determine which markets the Alberta-grown mung beans will be best suited for. Other companies have also expressed interest in setting up production contracts for Prairie producers.

There is still work to be carried out by government and industry before the commercial mung bean industry is up and running in Western Canada. Olson cites tasks such as improving disease resistance and yield; exploring organic mung bean production; developing inoculants and registering pesticides; securing germplasm directly from other countries growing mung beans; business development; and obtaining suitable lines for black gram sprouts, which command a premium on the Japanese market.

Ultimately, though, the western Canadian industry doesn’t need to look any further than Ontario to see that mung beans can be a viable crop.

“(AC Harosprout) is well adapted to Ontario and in the last two years there have been seed companies interested in it. They have gone into commercial production of Harosprout,” says Navabi. 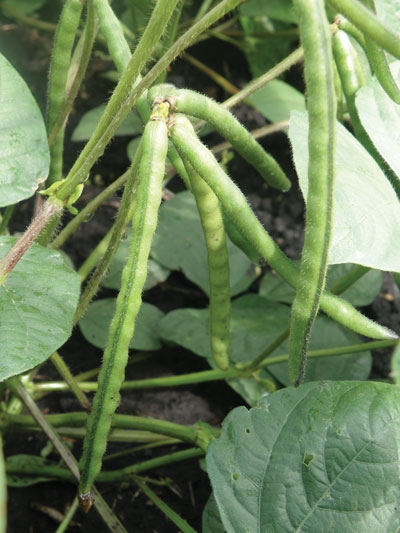 Mung bean is used in many different food products. Consumers from around the world enjoy mung beans. Starch from the beans forms delicate vermicelli noodles and delicious moon cakes.
Print this page