The key to controlling tufted vetch in soybeans is to try to maximize control in all crops in the rotation and in all kinds of windows. That’s the advice of Mike Cowbrough, weed management specialist with the Ontario Ministry of Agriculture, Food and Rural Affairs (OMAFRA). He has been investigating options for tufted vetch control for about 14 years so he knows just how difficult this weed is to conquer. 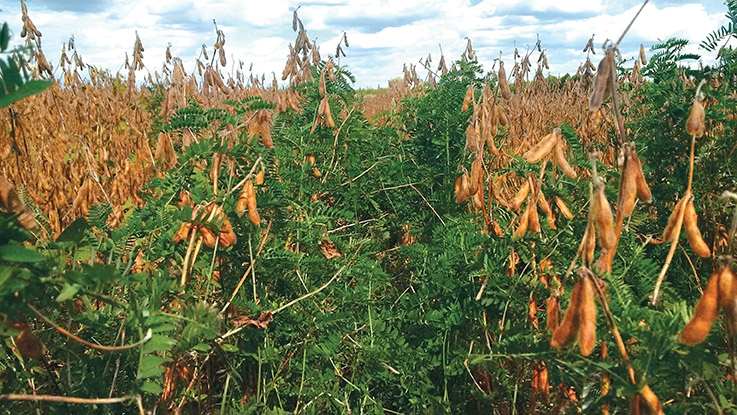 Tufted vetch can be a serious problem in soybeans.

Tufted vetch (Vicia cracca) is a purple-flowered perennial legume that can climb onto and smother other plants. It reproduces by seed and also spreads by underground rootstocks. It can tolerate various herbicides, including glyphosate at the rates typically used in glyphosate-tolerant crops. The weed can also get tangled around equipment, reducing harvesting efficiency. In short, it’s troublesome in any crop.

It’s an especially tough problem in soybeans because of three factors, Cowbrough explains. “The first thing is that there are fewer herbicides with activity on tufted vetch in soybeans than in crops like corn and wheat.

“The second is that vetch is a late-germinating species, but the arsenal of herbicides in soybeans that actually give you a fighting chance to control the weed can only really be applied prior to planting. Unfortunately, in most years vetch hasn’t even reared its ugly head out of the ground yet at that point, so there’s not much top-growth to target with a pre-plant herbicide.”

And the third factor is that tufted vetch has one heck of a root system. “It has a very thin, narrow but very persistent root system, which goes down to pretty significant depths. So it has quite a reserve to feed top-growth. To whittle that down takes years of effort,” he says.

This root system makes season-long control challenging. “It can continually send up new vegetative shoots, and the bigger the root system, the greater the ability to send up new shoots throughout the season.” He adds, “Vetch tends to show up in dry years because crop canopy closure isn’t as good and because its root system allows it to handle drought stress a lot more easily.”

Options in the soybean year
Although there are no effective options for controlling tufted vetch in conventional soybeans once the crop has emerged, Cowbrough has found some promising pre-plant and pre-emergence options.

He recently evaluated pre-plant burndown treatments in plots on a block of land at the Elora Research Station in Ontario, which has significant vetch pressure. The trial involved 14 different treatments, duplicated in 2014 and 2015.

The most effective treatment was 2,4-D ester 700 at 320 millilitres per acre (mL/ac) tank-mixed with glyphosate and applied seven days before planting. “In the first year we had amazing control [with 2,4-D ester + glyphosate] for most of the year. Then in the second year, it wasn’t as impressive.” He adds, “I’m using the term ‘amazing’ loosely because the bar is set pretty low for tufted vetch control in soybean. No treatment in soybean at any application timing has consistently provided over 80 per cent control.”

The difference in control between 2014 and 2015 was mainly due to the difference in the amount of tufted vetch that had emerged by application time. “In 2014, we had a wetter than normal spring, so we weren’t able to get into the field and plant soybeans until early June. As a result, a good amount of vetch was already up. In that situation, a pre-plant application of 2,4-D and Roundup is more likely to give better control throughout the season,” he says. “The second year had a more typical start to the spring, so the soybeans were planted in mid-May. As a result, fewer vetch plants had emerged at the time of the pre-plant application.”

For the 2,4-D ester + glyphosate tank mix, the average control eight weeks after application was 70 per cent. This could be a good strategy in years when a lot of tufted vetch has already emerged by a week before soybean planting time.

Cowbrough has also seen some fairly good results with a pre-emergent application of Boundary LQD tank-mixed with Broadstrike RC. (Table 1)

In 2016, Cowbrough shifted his tufted vetch/soybean work at Elora to dose-response trials with the new herbicide-tolerant technologies: Enlist soybeans, which are tolerant to glyphosate, glufosinate and 2,4-D choline; and Xtend soybeans, which are tolerant to glyphosate and dicamba (the active ingredient in Banvel). Both 2,4-D and dicamba are Group 4 herbicides (synthetic auxins).

“In this trial, we are evaluating the active ingredients 2,4-D and dicamba to see what rates optimize top-growth control,” he says. “[As of mid-October 2016] we haven’t summarized the data yet, but both those systems certainly show some promise for managing vetch in a soybean crop.”

Other windows in the rotation
Ontario studies, especially by University of Guelph researchers, have also identified options for controlling tufted vetch in other windows in the rotation. “The research programs of Peter Sikkema, Clarence Swanton and François Tardif are responsible for generating a lot of this data. I’m thankful that they let me tag along and help out where I can,” Cowbrough says.

Generally, the most effective herbicide application times for this late-emerging weed tend to be after crop emergence or after harvest because there’s more vetch top-growth.

Cowbrough says there’s an opportunity to hit tufted vetch in the fall after harvest of a cereal or soybean crop but before the first frost because tufted vetch is sensitive to cold temperatures. In the fall, perennial plants are storing sugars and photosynthates in their roots, so the flow within the plant is from aboveground tissues into the roots and herbicides move with this flow.

“We’ve done a limited amount of research, but generally speaking managing vetch in the fall has benefits for the next year. We found that the addition of either Distinct (diflufenzopyr/dicamba) or Lontrel 360 (clopyralid) to glyphosate significantly reduced the amount of vetch that emerged the following spring and into the summer.” But, he cautions, “Don’t use Lontrel 360 in the fall if you’re going to plant a legume, such as soybeans, edible beans or alfalfa, the next year because significant injury will occur.” (Table 2)

Editor’s note: The tables in this article are adapted from a book about problem weeds Mike Cowbrough is working on. The book will be available in several formats through www.fieldcropnews.com in early 2017.