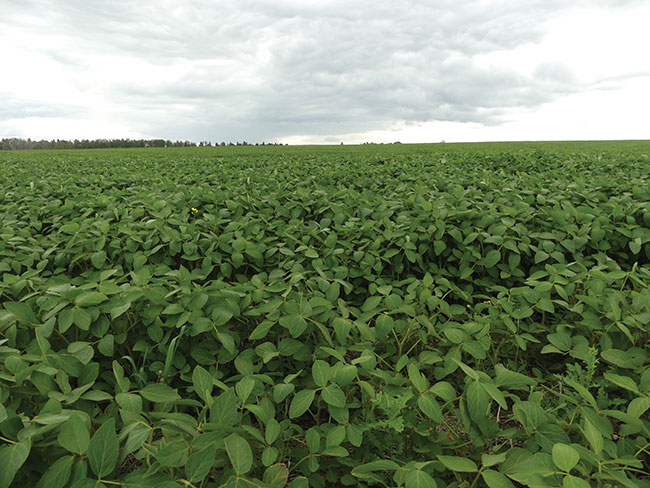 So far, there have not been any “big” yield penalties from tight soybean rotations. Photo by Bruce Barker.

As soybeans gained traction in Manitoba and eastern Saskatchewan, the question of how to fit them into crop rotations was asked. In the United States Midwest, corn-soybean is the standard rotation, but it has resulted in serious herbicide resistance issues. While corn on the Prairies isn’t as common, yet, rotations here have been more diverse.

“The most common crop sequences with soybeans in Manitoba would be wheat-soy-canola or cereal-soy-cereal-canola, but we have seen a shift to more cropping systems incorporating corn, and more recently, peas, says Cassandra Tkachuk, production specialist – east, with the Manitoba Pulse and Soybean Growers (MPSG) in Carman, Man. MPSG has provided funding to several studies looking into soybean crop rotations.

Current, on-going research by plant scientist Yvonne Lawley with the University of Manitoba is set to build on earlier crop sequence trials conducted in Manitoba. Her two-year crop sequence trial that ran in 2013 and 2014 at Carman and Portage la Prairie looked into how preceding crops impacted soybean production. Lawley found that corn, wheat or canola preceding soybean produced consistent yields, but yield was lower in a soybean continuous sequence.

A follow-up study was conducted by Lawley over a four-year period from 2014 through 2017. This compared continuous soybean, corn-soybean, canola-soybean, and wheat-canola-corn-soybean sequences. Few differences in yield and soil health were observed.

In 2018, Lawley established another crop rotation study currently planned to run for five years until 2023. This project will continue to evaluate the impact of the frequency of soybeans in rotation at Carman and Kelburn in central Manitoba on soybean and canola production, economic return, and soil health. The experiment is also serving as a field laboratory for other multidisciplinary studies including soybean and canola pathology, and the impact of flooding on soil rhizobia populations. This study is comparing the same rotations as the earlier 2014 through 2017 study.

“Crop rotation is one of the foundational aspects of a cropping system. It can influence yield, pest dynamics like disease pressure, soil dynamics and residue management. Each of these components is influenced by the crops involved and the region they are in,” Tkachuk says. “With the incorporation of soybeans into cropping systems on such a dramatic scale over a short time, we need to know what we’re dealing with so we can keep pests in check, be good stewards of our soil and, of course, keep yield potential maximized.” 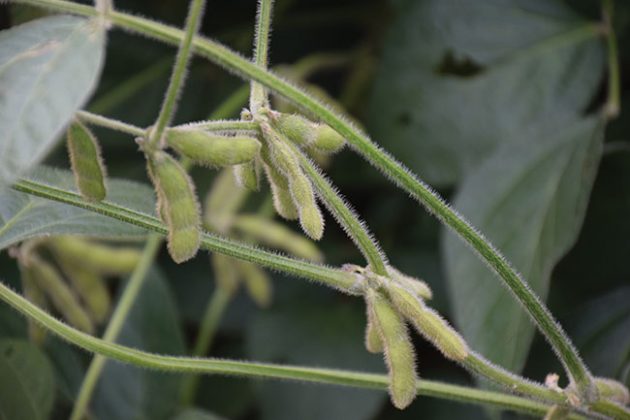 There are long-term benefits to diverse crop rotations.
Photo by Top Crop Manager.

Few yield penalties for tight soybean rotations – so far
Tkachuk says the different crop rotation trials over the past decade indicate that there have not been any “big” yield penalties from tight soybean rotations, but this could change over time as the crop becomes more established in Manitoba and soybean is grown in rotation more often. She says that other crop rotation research generally points to greater yield and production stability when the rotation is diverse. Clubroot disease in canola, and root rot diseases in pulses are two examples of issues that can arise with tight rotations.

“There are long-term benefits to diversifying, and the decisions made now eventually become long-term, impactful ones,” Tkachuk says.

In the research trials, after a four-year cycle, the soybean test crop grown in 2017 showed a yield reduction at one of three site-years from continuous soybean compared to canola-soybean, but did not differ statistically from the corn-soy or the diverse wheat-canola-corn-soybean sequence. At the other two of three site-years, yields were similar among sequences. The measurements to evaluate the impact of crop rotation on soybean production will occur in the soybean test crop year of 2021.

“We will see what happened and if they differ from previous results, but for now, the system appears to be quite resilient,” Tkachuk says.

She adds MPSG is also impressed by the multi-disciplinary approach that Lawley and her colleagues have taken with the research. It also serves as a field laboratory for researchers like Fouad Daayf to conduct pathology research and Ivan Oresnik to conduct research on soil rhizobia populations in response to crop rotations.

To date, the soil enzymes, β-glucosidase, β-glucosaminidase, and acid phosphatase, (another measure of soil health) have not differed among rotations.

Soil fertility data so far has shown that the continuous soybean rotation has resulted in a decline in soil phosphorus (P) levels over time. This was expected because soybeans in sequence did not have P fertilizer applied, and because soybean remove high amounts of P from the field. In addition, soybeans have not contributed additional nitrogen (N) to the following crop, despite the fact that they are N-fixing legumes. As a result, growers shouldn’t expect N-credits for crops following soybeans.

“There is more to learn over time as these systems become longer-term crop rotations, rather than shorter-term crop sequences. Each four-year phase makes it more interesting,” Tkachuk says.