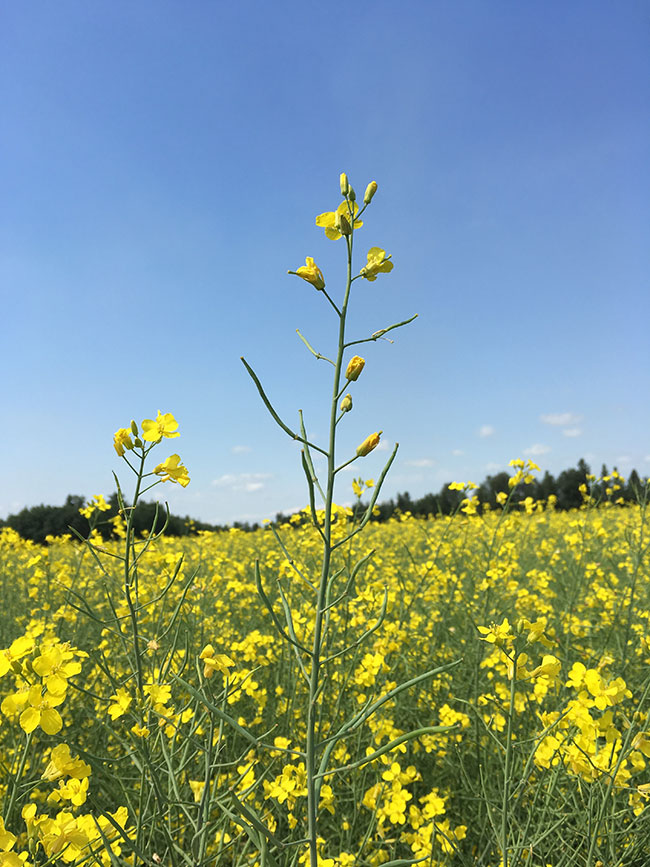 The damage from canola flower midge occurs when larvae feed on developing flower buds, preventing the flowers from opening and forming pods. Photo courtesy of Boyd Mori, University of Alberta.

The canola flower midge, Contarinia brassicola, is a recently discovered insect pest of canola on the Prairies. Discovered in 2016 by researcher Boyd Mori and colleagues with Agriculture and Agri-Food Canada (AAFC) during routine monitoring for swede midge in Saskatchewan, the new to science insect pest causes flower galls that result in aborted pods. The damage results when larvae feed on developing flower buds, preventing the flowers from opening and forming pods. Although currently not considered an economic pest, improving monitoring and developing forecasting tools for canola flower midge are important for the future.

In this two-year project, led by masters’ student Kyle Van Camp, one objective is to determine which trap type and trap placement works best and to refine the pheromone trapping system. A second objective is to evaluate the relationship between adult midges captured in pheromone-baited traps, egg and larval density, and damage in the field. Van Camp will also be investigating abiotic factors such as weather, soil type and other factors that affect midge population densities. This data will be used to estimate the pest status of the canola flower midge and provide tools that can be used to monitor and predict infestations.

“We tested three trap types in the field and found that the Jackson sticky traps we have been using all along worked the best,” Mori says. “We started using the Jackson traps for swede midge, and discovered they are also very effective for canola flower midge. We also looked at trap height and found that placing the trap 50 centimetres off the group and at the field edge worked the best if not better than other heights and locations we tested. With the trapping system optimized, the next step was to try to relate the midge trap data to the plant damage we see in the field.” 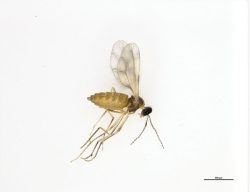 The pheromone-baited traps were set up in commercial canola fields in east-central Alberta in May and data was collected through September to see if the midge were there the whole time – they were, and continued to be trapped even after the crop was harvested. Along with the trap samples, weekly plant samples were collected throughout the summer to determine what life stage of the midge was present, eggs or larvae, and also assess damaged canola flowers. Once the trap data and field data are analyzed, researchers hope to be able to relate the number of midge captured in the trap to the number of damaged flowers and the number of eggs or larvae in the field. This information will also improve the understanding of the life cycle of the canola flower midge.

Mori adds they were also notified about possible midge in canola pods from one location in southern Alberta and a second in Saskatchewan in 2021. The midge was confirmed to be canola flower midge however Mori doesn’t believe the midge was causing damage to the pod itself. It is more likely that the pods had been previously damaged and the midge took the opportunity to get inside the pods to lay their eggs. Although canola flower midge has been mostly found in central Alberta and east into Saskatchewan and the Swan River Valley in Manitoba, this Alberta location near Highway 1 between Calgary and Brooks was further south than researchers expected to find canola flower midge. 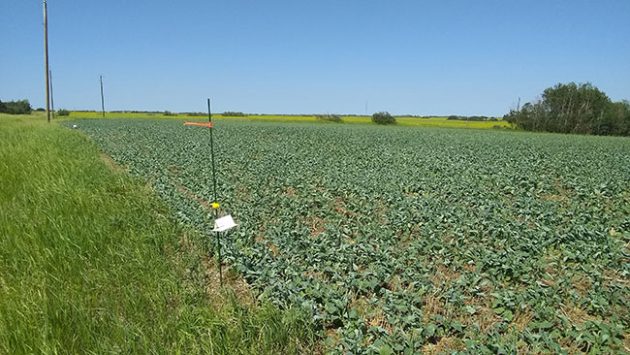 This project also includes a laboratory component to do some host plant testing to determine what plants the canola flower midge prefers and its range. “Kyle is establishing a colony in the lab and will be doing some host plant testing. We have surveyed cruciferous weeds in the fields, but have never found canola flower midge damage. We did find some damage in experimental mustard plots at the Melfort AAFC research station, however that is outside of the typical mustard growing region. Therefore,  it appears they may use other Brassicas but we don’t yet know to what extent. Hopefully we will learn more with this lab study.”

The project continues in 2022 with one more field season. The weather in 2021 over the growing season was atypical, so hopefully conditions will be a bit closer to normal to see how that affects results. “We are working with collaborators in other jurisdictions outside of Canada in the US, Europe and possibly Australia to see if the canola flower midge does occur anywhere else,” Mori says. “We think the canola flower midge is a native species to Western Canada, but we hope to confirm that by using the specific pheromone-baited traps for canola flower midge. To date, no other jurisdictions have reported similar damage symptoms to canola or oilseed rapeseed outside of Western Canada. For now, canola flower midge is not considered a pest of economic concern in canola in Western Canada. Once we complete this project, we expect to have a reliable and efficient monitoring tool that may be used to scout and forecast canola flower midge populations and predict infestations.” The project was funded by the Canola Council of Canada Agronomy Research Program and the Western Grains Research Foundation.