New herbicide technology, carefully applied and coupled with managing modes of action, is Ontario’s best hope for winning the war against what is arguably the worst broadleaf weed in Canada today. 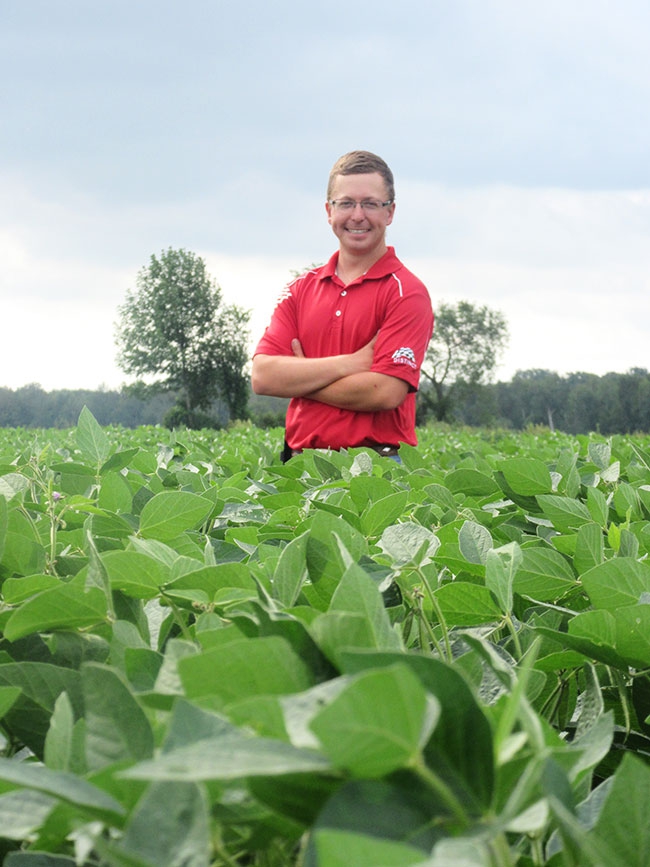 The weed is glyphosate-resistant (GR) Canada fleabane, also known in the United States as GR horseweed. In 2001, after discovery in Delaware in the U.S., it became the world’s first broadleaf weed with confirmed resistance to glyphosate. It was first reported in Canada in Essex County, Ont., in 2010. Two years later, it was documented in eight counties in the province. By 2015, it was confirmed in 30 counties across Ontario, ranging from the Detroit to Quebec borders.

One mature fleabane plant can measure five feet tall and can produce more than 200,000 viable seeds.

Like fluff from a thistle or dandelion, the seed releases and drifts on air currents. Most stays within a hundred metres of the parent plant, but as an example, one study from Cornell University found horseweed seed can travel up to 550 kilometres from the parent plant.

“You see this pattern. In year one, one GR Canada fleabane plant goes to seed in a field; you might not notice it,” says Chris Budd, field biologist for BASF in Eastern Canada. “Year two, you start to see a teardrop pattern [of infestation] because of wind dispersal. By year three, if it’s not targeted and managed, it’s turning into a scattered situation across the field.”

When uncontrolled in a crop, it’s deadly to production. When glyphosate won’t control it, and if nothing else is used, the soybean yield loss due to Canada fleabane can be more than 90 per cent.

The herbicide technology first registered to control Canada fleabane was saflufenacil (Kixor), a Group 14 herbicide registered for annual broadleaf weeds in soybean, corn (field and sweet), barley, oats and wheat (spring, winter and durum) in Canada in 2010. When applied pre-plant and pre-emergence, glyphosate and Merge are required.

Herbicides in Group 14 inhibit the protoporphyrinogen oxidase (PPO) enzyme, which is important in the production of chlorophyll. Basically, they disrupt plant cellular membranes, causing cell leakage and desiccation of tissues.

Best practices
Three-way herbicide tank mix options for controlling Canada fleabane were the subject of a study at the University of Guelph in 2014 and 2015. The weed scientists concluded the best single mix for soybean was a combination using glyphosate, Kixor and metribuzin. This study laid a foundation, Budd says, since it identified the most effective treatment and timing for controlling Ontario’s worst weed.

However, for Budd, some questions still needed answering. Since the Canada fleabane species is highly adaptive, what more could be done to prevent the onset of new resistance to Kixor? Could the spraying methodology be fine-tuned to improve control?

So, Budd led a new University of Guelph study, published earlier this year in Weed Science, to dig into best management practices for using tank-mix technology in soybeans.

The two-year study was done on three Ontario farms in 2014 and 2015 by a four-member team of weed scientists in co-operation with BASF Canada. In the journal article, they reported on effectiveness of Canada fleabane control in relation to the weed density, weed height and time of day for spraying. Other components of the study included biologically effective rates and tank-mix partners with saflufenacil.

Time of day study
The weed science team at Guelph turned Budd loose to work on further management improvements. The work controlled for the possible effects related to the time of day the herbicide was applied. The university set up small trial plots at locations that already had GR Canada fleabane infestations. The eight-metre plots were seeded to three rows of beans on 30-inch spacing.

All treatments in the two-year program used a base tank-mix application of glyphosate, Kixor and Merge surfactant.

Beginning in May 2014, Budd set up a three-hour spray interval program: Seven times in 18 hours, starting at 6 a.m., Budd applied the recommended Kixor treatment to a fresh set of trial plots with similar levels of Canada fleabane infestation. Days later, he went to the second research site and repeated the treatment.

Starting a week after the first day of treatments, the team returned to rate the level of control. They repeated this in weeks two, three, four and eight.

For confidence in the numbers, the team repeated all of this in 2015. They also had weed-free plots and weedy, untreated plots.

The greatest control of GR Canada fleabane was achieved with applications between 9 a.m. and 9 p.m. Control was reduced when applications were at 6 a.m. or midnight.

Soybean yield peaked with the 3 p.m. or mid-afternoon spraying, with about 20 per cent more yield than treatments at 6 a.m. or midnight.

“We only saw a downside in the middle of the night, probably because of several environmental factors. Even at night, the difference was only 11 per cent so we were still maintaining control,” Budd says.

The height trial had seven categories of GR Canada fleabane plant heights, from one centimetre to more than 25 centimetres. The trial had 10 Canada fleabane plants per treatment, or 70 in total, randomly distributed in the plots and each marked with a wire flag. Six weeks after application, 99 per cent control was confirmed for plants under five centimetres tall. Control decreased to 95 per cent for plants more than 25 centimetres tall. The tallest plants also had some regrowth.

For the height study, Budd says there wasn’t much difference – a result that surprised him.

“For the 25 centimetre plants, there was slightly less control, but that’s a giant plant for any contact chemistry. These are big plants at the time of application. As for why it’s still effective on tall plants, I think that comes back to water volume. We were getting more coverage.”

“When you have very high density, you have multiple targets to hit. In a high density situation, you want to have a high water volume. We encourage using 20 gallons of water per acre in that situation so that you get good coverage of everything, down to hitting the smaller ones that otherwise would be shaded,” Budd says.

Other significant findings include:

“If the crop rotation is tight (corn-soybeans), you have the option of the Xtend soybean that is dicamba-tolerant. Then you can have a tank mix of Kixor with dicamba at the pre-plant, pre-emerge timing, and that is going to be effective,” Budd says. “Then another year you can have Kixor plus Metribuzin. You’re mixing your tanks, but maintaining multiple modes of effective action.”

The combination of Kixor with Metribuzin was pinpointed in a different study as part of his thesis, using RR2 soybeans. Many herbicide combinations were tested, but it was before dicamba-tolerant Xtend soybeans became available.

In the RR2 soybean system, the best treatment found for GR Canada fleabane control was the Kixor plus Metribuzin at 400 grams of active per hectare, Budd says.

“Today, an Xtend system with Kixor and dicamba would be just as good as the Kixor plus Metribuzin,” he concludes.