Weeks of heavy rain and snow at harvest last fall left western Canadian farmers carrying a devastating 2.5 million acres of field crops unable to be harvested. Though that scenario is an extreme, climate change means anomalous weather may be our new normal. Successful farmers expect the unexpected and know planning in advance for adverse conditions can make a huge difference in ultimate crop returns. With excessively wet weather the reality throughout much of the season for many Ontario producers, at least some growers are already asking how they might minimize moisture-induced harvest losses if the wet weather continues. 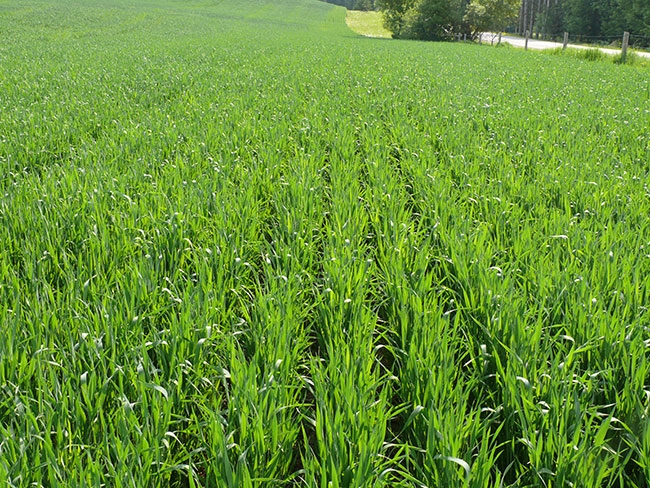 “I would definitely encourage growers to harvest their wheat when they can and pay for necessary drying charges. In the end, that will be a more successful strategy than delaying harvest because of wet weather,” says Joanna Follings, a cereal specialist with the Ontario Ministry of Agriculture, Food and Rural Affairs (OMAFRA).

Leaving any crop to overwinter in the field is the poorest option. A crop like soybean will be entirely destroyed and research shows even a hardier crop like corn will lose significant yield due to lodging. Though some western Canadian producers were able to capture some value from certain crops that could not be harvested until this spring, Ontario’s heavier precipitation, especially in areas impacted by lake-effect snow, means most crops overwintered in Ontario retain very little value.

“If you can get that combine into the field, even if you mud it up some, you just have to get that crop off,” says David Hooker, a field crop agronomist at the University of Guelph.

At press time, the high earlier-season moisture in many parts of Ontario was promoting strong growth in some field crops.

“It could end up being a terrific crop for some growers,” says Horst Bohner, OMAFRA’s soybean specialist. “Some guys think it’s the best crop they’ve ever seen because of sufficient moisture throughout the growing season.”

That said, not all fields are equally successful. Many crops were planted late and some have poor establishment due to soil crusting or excessive moisture stress. Moisture also tends to bring disease. Late season moisture could promote deterioration in-crop due to diseases like white mould and root rot in soybeans, Fusarium in wheat, and gibberella, stalk rot and ear moulds in corn. Harvesting impacted fields as early as possible, limiting disease contamination by harvesting the worst-hit areas separately and cleaning harvested product where feasible can make an enormous difference in minimizing losses.

High-moisture grain will require additional drying to keep the grain sound and to reduce storage moulds. Keep a close eye on high moisture grain: it is often more difficult to dry and it may need additional aeration. Remember that crops like corn, when impacted by disease in the field, can be challenging to aerate in storage due to compromised, cracked and small seeds.

Should excessive moisture earlier in the season and/or at harvest decrease crop quality to the point of very significant losses, crop insurance will be available for those who opted in to programs.

“Most crops have been planted across the province and are looking good, but some areas of the province have seen much more severe weather, such as Niagara, Meaford, Holland Marsh and other surrounding muck areas, Northumberland County, Prince Edward County, Halton, York and into Peel,” says Stephanie Charest, Agricorp’s manager of customer communications.

“Agricorp is here to help. We’ve been busy in the fields meeting with producers who are facing challenging conditions, answering questions about program coverage and helping them through the claim process.”

Producers should call Agricorp if they anticipate a delay in harvest, if they think their crops may be too damaged for the intended use, if they don’t think a crop will be worth harvesting at all, or if other conditions are putting their crops at risk, she says.

In addition to purchasing crop insurance, there are several steps producers can take months or years in advance to minimize the negative effects of excessive moisture at harvest.

The very best management strategy in fields that are regularly over-wet is systematic tile drainage. In most years, the greatest return on tile’s investment occurs early in the season, when excess moisture would otherwise limit a producer’s ability to plant. In certain years, however, the return on investment of installing tile can be obvious right through harvest. Currently, about 50 per cent of fields are systematically tile drained in Ontario and many more producers plan to incorporate drainage in the near future.

“Tile drainage contractors are booked, some for a couple years, because growers see such huge benefit,” Hooker says.

Optimizing soil health can significantly improve a producer’s ability to harvest a crop in a timely fashion in wet conditions, he adds. “Growers who have adopted no-till or strip-till can get into a field in much wetter conditions because the improved soil structure can hold up heavy equipment far better than ground that has been tilled.”

Prioritizing soil health also minimizes compaction, which means each pass of the combine at harvest will produce much less negative impact to subsequent crops.

At press time, guessing at what fall clouds may or may not bring was largely futile. While pre-planning and being ready to mitigate challenges is always positive, Bohner reminds growers they should take the season a day at a time.

“What happens earlier in the season has no bearing on how much rain we’ll see later in the season,” he says. “So long as guys can get into their fields to harvest, and the crop moisture comes down to an acceptable range, we should be OK. If it ends up being really wet, growers may have to wait until the ground freezes. But, if August and September end up being dry, the conversation could be quite different in the fall and we might be talking about how to minimize bean harvest losses from excessively dry seed.”

Nature is very adept at throwing weather curveballs and feeling calmly prepared to best manage any eventuality improves a producer’s ability to be both judiciously proactive and rapidly responsive.

What about winter wheat?
Wheat harvest conditions have been positive so far in most of Ontario. Though rain has stalled harvest for a few days in some areas and caused pockets of winter wheat lodging, most producers have been able to get into fields fairly easily this season. Hopefully, that trend will continue through September.

Should excess moisture occur as other crops enter harvest, it could negatively affect not only the current year but also the next for growers planning to plant winter wheat. When winter wheat seeding is pushed beyond its ideal dates, total planted acreage tends to decrease, winterkill generally increases and the subsequent year’s yields often drop. If heavy precipitation squeezes soybean harvest, producers should prioritize harvesting fields they intend to seed to winter wheat.

“Growers see the benefits of getting a winter wheat crop established in good time. But, some can be tempted to push it beyond ideal seeding dates, which often results in a reduction in yield,” says Joanna Follings, a cereal specialist with the Ontario Ministry of Agriculture, Food and Rural Affairs.