Field research on starter fertilizers for corn in Ontario continues to show that potassium deserves more respect as a crop nutrient. 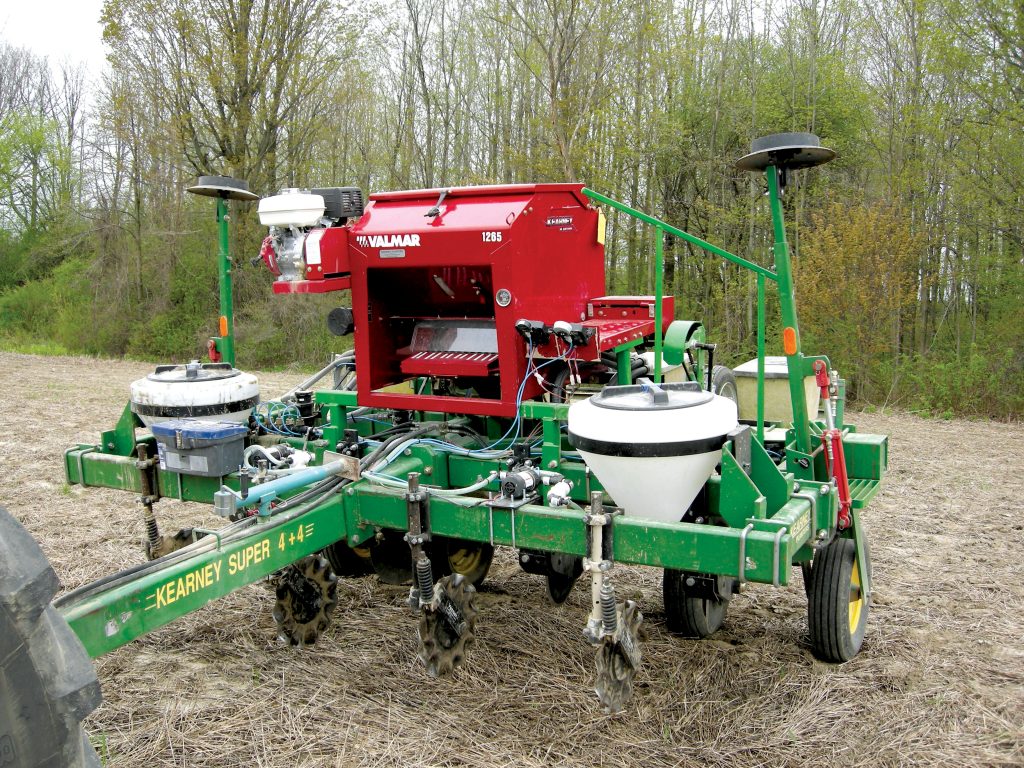 A research planter is equipped with liquid and dry starter systems for accurate treatment and rate comparisons in OMAF’s recent study of starter fertilizers in corn. Field research on starter fertilizers for corn in Ontario continues to show that potassium deserves more respect as a crop nutrient.

Greg Stewart, corn specialist with the Ontario Ministry of Agriculture and Food (OMAF), has led studies that have looked at a range of options for starter fertilizers, including products, placements and rates. Building on previous research that began in 2008, the most recent study evaluated corn yield response and economic returns to the application of sulphur and zinc to starter fertilizer blends.

“We were at a point where we tried to add something different to the study in the last two years,” says Stewart of the move to add the micronutrients to the starter fertilizer research in 2012 and 2013.

In the previous three years, the researchers discovered an intriguing situation on sites with soil that tested low for potassium. According to Stewart, the lack of potassium became a dominant factor in the study because the only starters that showed positive yield responses were the ones that included K.

“It’s not unusual to find levels that have slipped down to this point where you would say nothing else really matters until you get that K corrected.”

The scenario played out again during the study in which sulphur and zinc were added. Stewart says it’s important to note they didn’t deliberately look for areas that were low in sulphur or zinc.

Starters were applied on six farmer sites where the core starter fertilizer blends were tested to investigate the relative importance of phosphorus, sulphur, zinc and potassium nutrition in dry starter fertilizer. The other four sites were intensive sites, which investigated the contributions of the core starter blends as well as some other dry/liquid fertilizers and alternative placement options towards increasing corn productivity.

Across the intensive sites, significant starter fertilizer impacts were observed only at Elora, which had the lowest soil test levels for P and K. At Elora, potash additions were the most important, but once K needs were looked after significant yield increases could be obtained from phosphorus, sulphur and zinc.

“The most exciting news at Elora (soil test P:9 and soil test K:46) is that you could move yields from 68 to 186 bu/acre if you looked after all the fertilizer needs,” notes Stewart.

When the yields were averaged across all farmer sites, significant increases in corn yields were observed for all starter fertilizers.

The study notes that adding sulphur and zinc did not appear to produce yield responses greater than that of MAP alone. There was also a trend across these sites to have the starters with K be the highest yielding but it was not statistically significant.

On farmer sites, the control averaged 157 bushels per acre. MAP alone, produced an average of 172, similar to yields with MAP with sulphur and zinc.   MAP, plus sulphur, zinc and potash produced 174 bushels per acre.

While the numbers are still being finalized for 2013, Stewart says there were solid results for applying a starter with nitrogen and phosphorus, particularly on the sites where the potassium was corrected.

There were few signs of a response from the micronutrients.

“I don’t know how to accurately identify those because we’re still struggling to come up with a solid soil test that would allow you to definitively say this is a site where I should add sulphur and zinc.”

Overall, he suggests the results appear to support the idea of addressing proper phosphorus and potassium nutrition in corn, particularly with low soil tests.

“We’re sort of left with some unexciting news that if you have a significant potash deficiency, that is absolutely the hammer that you must deal with before dealing with other starter fertilizer options, even if something as basic as N and P makes much sense to you,” adds Stewart.

While the results may appear to be lacklustre, Stewart believes they point to an intriguing idea for managing phosphorus and potassium. Instead of using the traditional approach of broadcasting the nutrients together, he suggests there are good economical and environmental reasons to ask farmers to manage P and K separately.

“We’d really like to have producers try to focus on banding the P into the soil, close to the plant. And on potash, go in the other direction and broadcast it where you need it,” says Stewart, noting the potash is essentially benign to the environment. “So if you are going to try to do one blend of P and K for all of your operation and broadcast it all and cultivate it in or broadcast in the fall, it really becomes difficult to manage P and K in the best way for each element.”

While appreciating that broadcasting simplifies the process for most farmers who are already facing a number of management demands in their operations, Stewart says there also needs to be a balance of improving profitability and keeping an eye on the environment.

He says years of research have shown that the response from broadcasting phosphorus is quite poor while the numbers for broadcasting potash are solid when it is applied where it is required.

As a starting point, he invites growers to seriously consider variable rates for potash.

“There is low hanging fruit in the site-specific world to apply potash where it needs it most,” says Stewart. “And I think the response to that will be much higher than trying to apply variable-rate phosphorus.”


Related
Putting the K in corn
Updating P and K strategies
Managing phosphorus and zinc in corn
Do you really need micronutrients?