Over the years, studies have been published to measure rates of yield gain both in Canada and elsewhere. Klein et al. (1996) combined rates of yield gain published by McCaig and DePauw (1995) with reported research budgets to study the economic returns on plant breeding. They concluded: “In all cases, benefits from yield-increasing research greatly exceeded costs. Even in the most pessimistic case (0.23 per cent increase in yield, 1991 prices and 10 per cent discount rate), net benefits were more than 10 times net costs.” Also: “The benefits of yield-increasing research accrue mainly to producers.” And: “The results of this study are consistent with estimated economic benefits reported in previous studies and suggest an underinvestment in wheat research.”

In 1992, an increase in the rate of investment in yield-based breeding occurred through the inception of the Wheat Research Checkoff, which was instigated by the Canadian Wheat Board and administered by the Western Grains Research Foundation. If this spending did affect the rate of yield gain, this impact should be detectable in cultivar performance data collected over time.

The Manitoba and Saskatchewan Seed Guides dating back to 1972 represent an unused source of yield comparisons to re-examine current progress in western Canadian spring wheat cultivar yields. Adjusting for the shift in check cultivars over time showed that the yield rise due to new cultivars could be divided into two periods.

Prior to the early 1990s, yields rose at a rate of about 0.33 per cent per year; these low early rates agree with other published estimates from this period and were possibly influenced by a strong emphasis on replicating the quality of previous cultivars. From the early 1990s to 2013, yields rose by about 0.7 per cent per year; this doubling of the earlier rate was significant, based on the non-overlap of confidence intervals of comparable slopes (see Fig. 1). 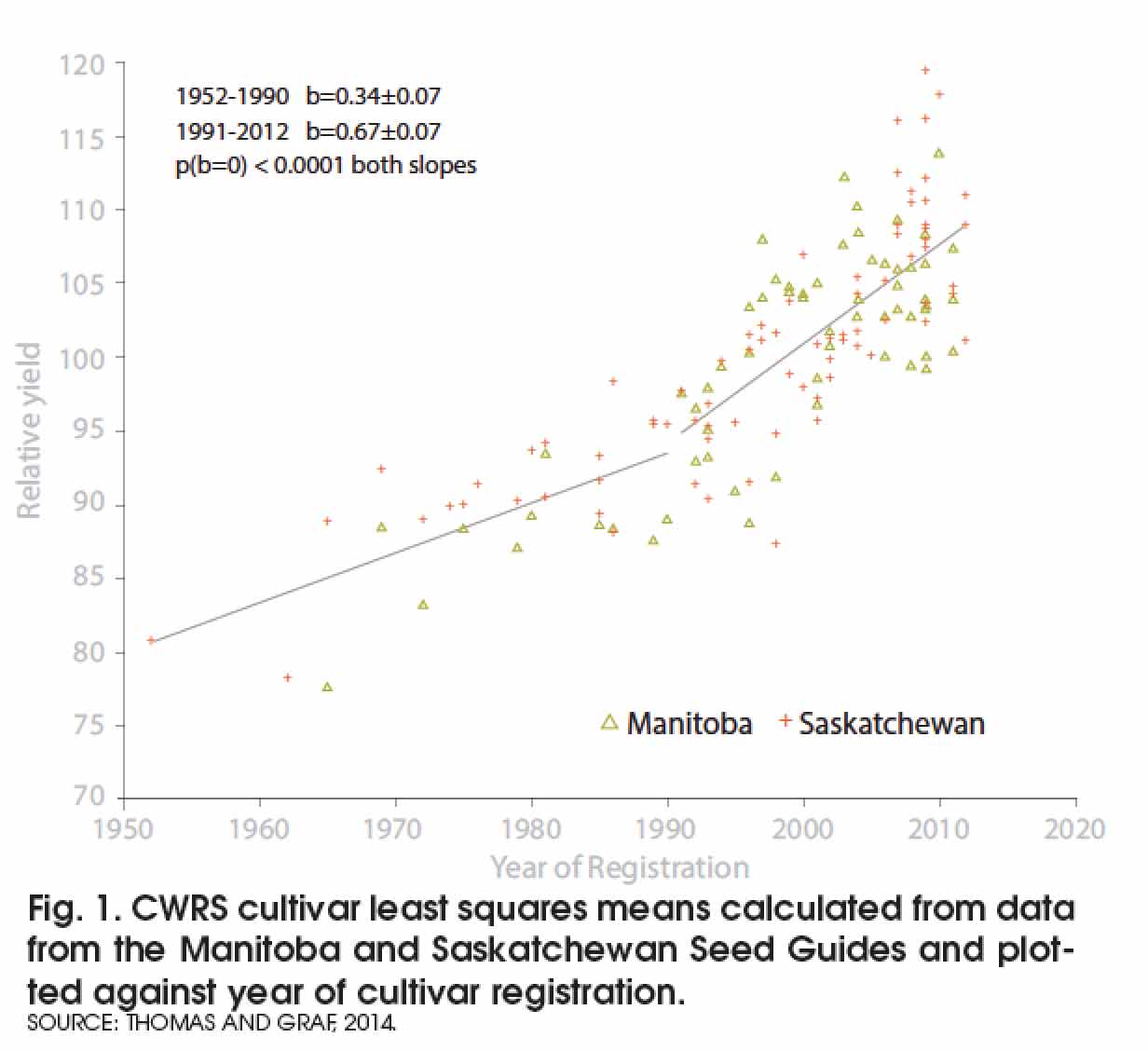 To compare rates published in the literature with these new rates, all slopes were adjusted to a common benchmark where mean yield=100 per cent. Following these adjustments, current rates in Western Canada (about 0.67 per cent per year) were comparable with a world average estimated to be about 0.62 per cent per year.

All conclusions about the rates of yield gain among wheat cultivars are robust since similar rates were obtained from the analysis of two independent and geographically distinct data sets (Manitoba Seed Guide and Saskatchewan Seed Guide) (see Fig. 2). Likewise rates of gain in on-farm yields based on Manitoba Crop Insurance records and those based on Statistics Canada surveys were also identical. 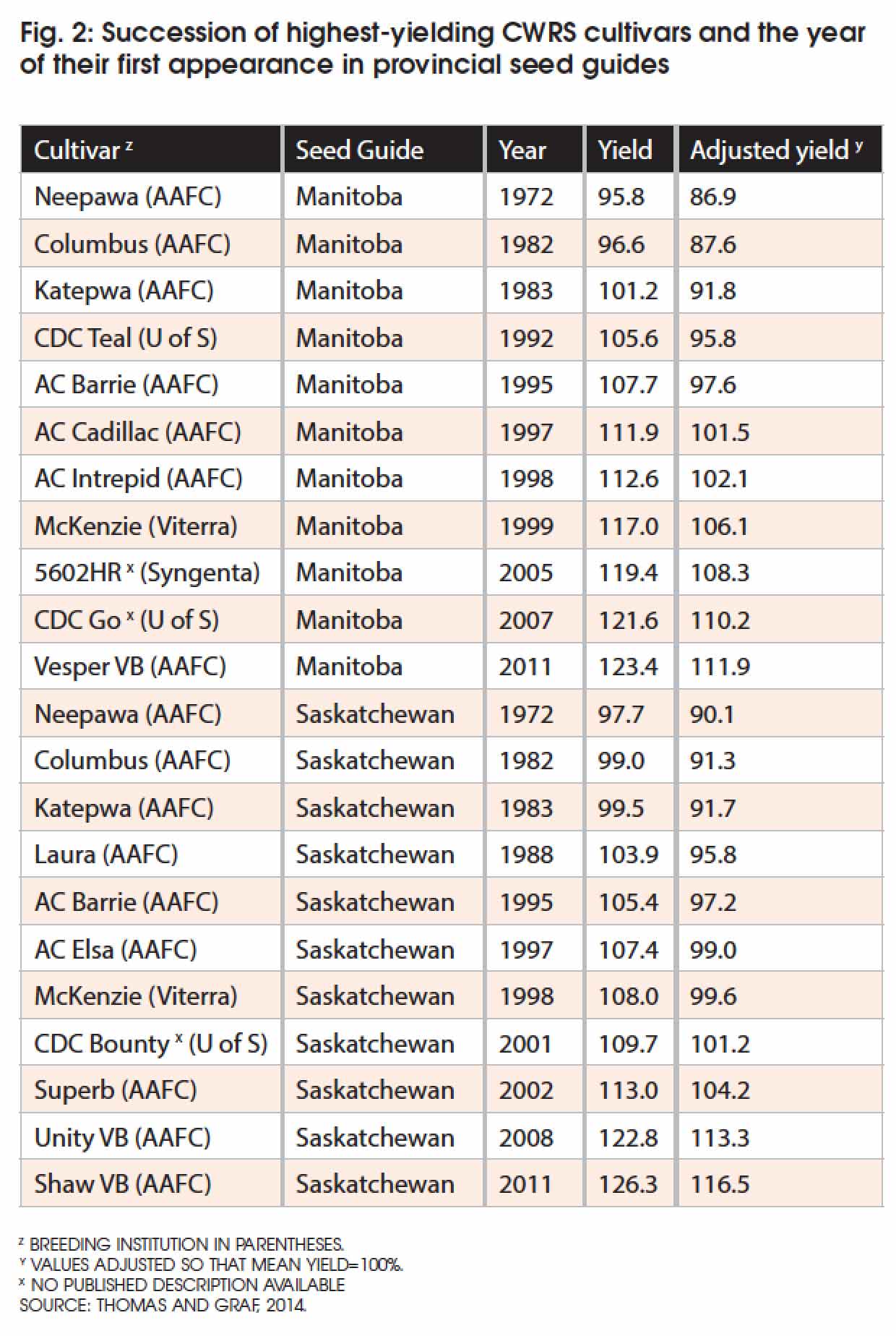 Variation in performance among Canada Western Red Spring cultivars based on the seed guides was significantly correlated with their on-farm yields based on Manitoba Management Plus Program (MMPP) crop insurance data (r=0.81, n=42). Beginning in 1991, on-farm yields rose by an average of about 1.4 per cent per year both in Manitoba (Manitoba Management Plus Program data) and across the entire western wheat area (Statistics Canada data). This compares favourably with a worldwide rate of yield increase for wheat since 1991 of 1.16 per cent per year.

Although western Canadian on-farm yield gains were attributed to a combination of new cultivars and upgraded agronomy, the two influences were not separable in the Manitoba crop insurance data set.

*Editor’s note:  This article is based on the -Canadian Journal of Plant Sciences Best Agronomy Article for 2015. The journal articles are open source to the public and the complete articles can be downloaded at pubs.aic.ca/journal/cjps. 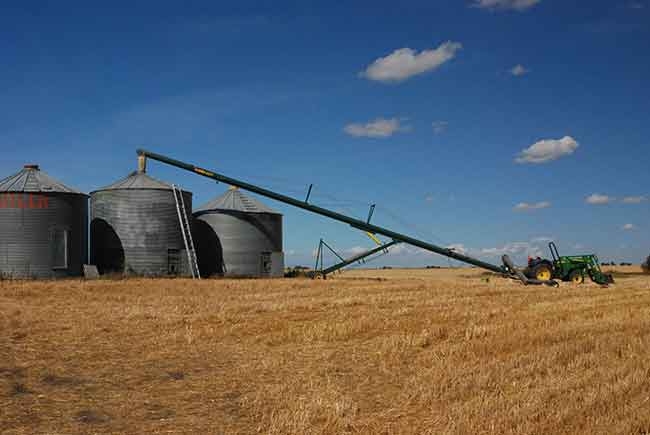 Wheat breeders have increased wheat yields by an average 0.7 per cent per year since the early 1990s. Over the years