As growers know, FHB fungi can produce toxins that limit the grain’s use for food and feed. The grain’s concentration of deoxynivalenol (DON), the most common FHB toxin, is the critical limiting factor for most buyers. 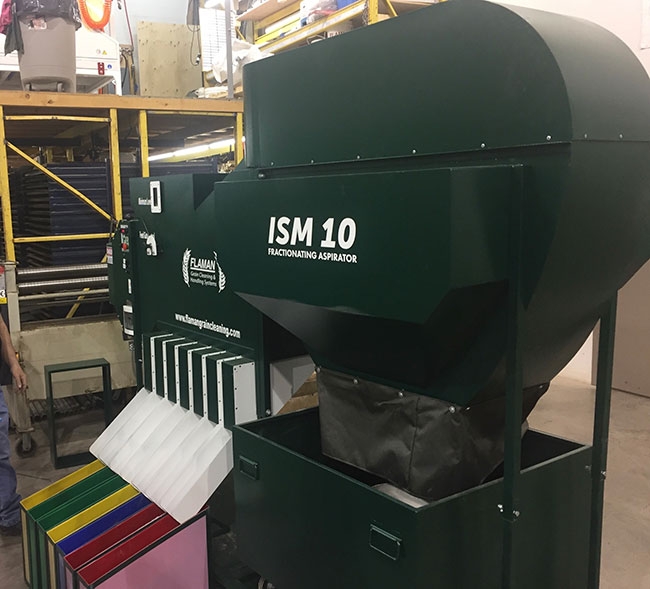 The air fractionator uses air aspiration to separate kernels based on their density; Fusarium-infected kernels are less dense. FHB fungi can produce toxins that limit the grain’s use for food and feed.

In this project, Newkirk and two of his graduate students are developing, evaluating and optimizing several post-harvest methods to reduce DON in Fusarium-affected grain. Their aim is to develop improved systems that provide high returns for producers and the industry, while ensuring the grain is safe to use.

In their experiments, the two students are measuring the actual concentrations of DON in the grain – they aren’t bothering to count Fusarium-damaged kernels. “Traditionally, the level of Fusarium damage, and therefore the potential for DON, was visually assessed using the Fusarium-damaged kernel count. Unfortunately, there are lots of kernels that do not have visible signs of the disease but contain the toxin. So it is really important that we in the industry measure the actual toxin,” explains Newkirk, who is an associate professor in the U of S department of animal and poultry science.

One of the students is working with barley, and the other is working with wheat and durum. Each of these crops has its own particular kernel characteristics, FHB resistance levels in its cultivars, and end uses. “For example, much of our barley is grown for malt. The malt industry has a very low tolerance for Fusarium. So we are trying to achieve much lower levels of DON in barley than in wheat that would be going to feed for poultry [which are relatively tolerant of DON],” Newkirk says.

Separating the good from the bad
Newkirk’s team is comparing three methods to separate the high-DON kernels from the rest of the grain: an air fractionator, near-infrared transmittance using a BoMill unit, and an optical sorter with near-infrared capacity.

An air fractionator is fairly simple grain cleaning technology that uses air aspiration to separate kernels based on their density. This technology can help in segregating kernels with DON because Fusarium-infected kernels are less dense. Newkirk says, “Extremely infected kernels – the tombstone kernels – are very, very light. But even kernels that are high quality can have DON and they have slightly less density.”

In optical sorters, the grain falls past multiple cameras that evaluate the external characteristics of the kernels. He notes, “Initially, the cameras on optical sorters were very simple, just black versus white. If all your grain is white, and the cameras see a black one, then the sorter activates an air nozzle that puts the black one in another channel. Over the years, the cameras have become much more sophisticated, detecting individual colours and gradients of colours, and then sizes and shapes. More recently these sorters have added infrared [detection], which is beyond the spectrum of visible light, the light that we can see. Infrared light gives you a whole different look at the seed.” Optical sorters can remove kernels with obvious Fusarium infection.

The BoMill near-infrared transmittance technology measures the wavelengths of light that pass through individual kernels. “It basically measures chemical changes in the seed [caused by Fusarium infection] to predict the amount of DON,” Newkirk explains.

The BoMill experiments in this project build on a previous U of S study with a BoMill unit that was calibrated to measure kernel protein content. That earlier study showed that segregating wheat kernels by protein content also helped segregate the kernels by their DON levels because Fusarium-affected kernels have less protein. “Since that time, we’ve worked with the company to help them develop a more robust calibration specifically for DON,” he says. “So we are now using a BoMill with this updated calibration and seeing if we can segregate the grain more effectively.”

For each sorting technology, Newkirk’s team will be experimenting with different equipment settings and other factors to find the most effective and efficient procedures.

Newkirk points out that each of the three technologies has its pros and cons. For instance, the BoMill is the most accurate but has the lowest throughput relative to the initial capital cost. So his team is also exploring ways to combine the different technologies to optimize the overall process from a user and a cost perspective. He says, “Would you use, for example, an optical sorter to take out the majority of kernels that are really visibly infected and only put a fraction through a BoMill? Or could you do it with just an optical sorter? Or could you get enough separation just by using an air fractionator or by combining the air fractionator with one of the other technologies?”

The air fractionator uses air aspiration to separate kernels based on their density; Fusarium-infected kernels are less dense.

One method involves abrasion. They are putting high-DON grain in a cement mixer for a short time, so the kernels bump against each other and knock loose some of the hyphae (fungal filaments). They are testing various options such as adding different mediums with the grain in the mixer and trying different ways to remove the loosened hyphae from the sample.

The other method uses ozone to oxidize the DON, converting it into a non-toxic compound. Their plan is to introduce ozone gas into the grain while the grain is dried down for the winter with an aeration fan.

“There has been research on this oxidation technique, but it was done in a laboratory in small vessels at higher moisture and high temperature conditions,” Newkirk explains. “Those conditions don’t exist in our Prairie storage systems – in the middle of winter when the grain is -20 C or -40 C, DON is not going to oxidize. But could we achieve oxidation if we were to do it with grain coming right off the combine under the kind of conditions that would be found when you first put your grain in storage?”

They will be applying the ozone at different concentrations and timings, and storing the grain under moisture and temperature conditions that would occur post-harvest in Saskatchewan.

Promising initial observations
This project runs from December 2017 to December 2020, so it’s still very early in the research. However, Newkirk and his team are already seeing some promising effects from their initial experiments.

“We’ve done a fair bit of BoMill work, and we are really impressed with what we’re able to achieve with it. For example, we are able to recover about 80 per cent of the grain at a level below the target DON level; in the case of barley, that target is below one ppm [part per million],” he notes.

“The air fractionation is working better than I would have imagined. We’re getting over 50 per cent recovery of grain with low levels of DON from grains that have pretty high DON.

“We’re just starting the abrasion work. It seems like we are able to knock the DON loose, but these hyphae seem to be very sticky and able to reattach themselves. I was hoping we would be able to use air to blow off perhaps 90 per cent of the DON, but right now we’re only getting about a 10 or 15 per cent DON reduction. So we are thinking about trying a high-pressure, low-volume water wash to remove the DON after it is knocked loose.”

Once they have all the data from all the experiments, Newkirk’s team will use an optimization program to see which settings and combinations of methods would give the greatest returns.

Tips for producers
Newkirk offers two key tips for producers dealing with Fusarium-affected grain. First: “Know what you’ve got. I certainly suggest that you test the material for DON. [The testing kit] costs a little bit of money, but it is a relatively easy test and can be done on-farm,” he says.

“And be sure to use really good representative samples for testing. The DON concentration varies greatly even within a bin off in a single field or within a truckload. So, don’t just take a little scoop off the back of the truck as you’re unloading it. You need multiple scoops that are representative of different areas.”

The sorting technologies used in the project are available on the Prairies to varying degrees. The project’s air fractionator is rented from Flaman Grain Cleaning and Handling. “Flaman’s is selling these units to farmers to clean up their grain before seeding, for example,” he says. “In our project, we are taking this technology one step further and doing some optimization for wind speeds and other settings.”

According to Newkirk, optical sorters have become fairly common in Prairie seed cleaning plants, mainly because this technology is extremely efficient at removing ergot. Some plants are also using these sorters to remove kernels with obvious Fusarium infection.

He knows of only three seed cleaning plants in Western Canada that have a BoMill at present. “So they are not common at all, but depending on the application, we certainly see them coming into play.”

Newkirk also notes, “Many of our farms now are so large that, if a producer had the time and the inclination to do some of the cleaning themselves, [any of the technologies used in this project] could be introduced on-farm. A number of suppliers sell optical sorters, aspiration units, or BoMill. They will happily take your samples and sort them with you so you can see if one of those solutions might work for you. Of course, many people choose to specialize so they would have a seed cleaning plant clean their grain.”

Newkirk is optimistic that his project will result in strategies that will improve the net returns from Fusarium-affected grain. “From what I’m seeing so far, it looks like we’ve got some options that will help.”

The project is funded through Sask Barley, Sask Wheat and the Saskatchewan Ministry of Agriculture’s Agriculture Development Fund.