When it comes to elemental fertilizer, size matters.

All crops require sulfur to varying degrees, but plants can only absorb it through their root systems in the form of SO₄²⁻. Sulfate fertilizer sources including ammonium sulfate, potassium sulfate and calcium sulfate are readily plant-available, but can leach through the soil profile into nearby bodies of water.

Elemental sulfur is different: it is not plant-available and must be oxidized to sulfate before it can be used by plants. Oxidation rates depend on temperature, moisture and soil conditions, as well as on sulfur particle size and distribution. 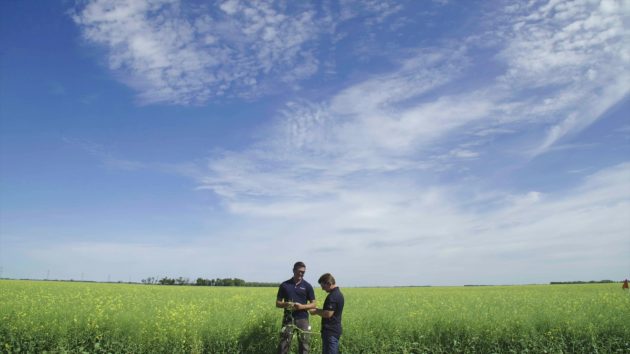 The smaller the particle size, the more quickly it can oxidize. Given the right soil conditions and the option to apply in the fall, elemental sulfur sources could help minimize leaching and increase fertilizer efficiency.

That’s the promise behind a new product from Nutrien, Smart Nutrition MAP+MST, a new product available to western Canadian producers that combines sulfur and phosphate in a single granule.

MAP refers to mono-ammonium phosphate, while “MST” stands for “micronized sulfur.” Due to its tiny particle size, the sulfur in the product can oxidize quickly, meaning it’s more readily available to crops. The product has an average particle size of 15 micron, according to Cristie Preston, a senior agronomist for the company. During the manufacturing of the MAP granule, micronized elemental sulfur is incorporated directly into the product, meaning MST is uniformly distributed in each granule for quicker oxidation.

Seed safety
Robert Mullen is director of agronomy for Nutrien. He says one problem facing producers is the danger of seed injury through salt stress.

According to Field Crop News, an online forum led by the Ontario Ministry of Agriculture, Food and Rural Affairs (OMAFRA) and its research partners, seedling injury through excess fertilizer application can occur in two ways: ammonia toxicity and salt injury. The latter happens when the amount of salt near a seed exceeds the salt content in seed cells, and the difference causes water to move out of the seed through osmotic pressure, drying out the seed and/or damaging the seedling.

But lower salt content in the fertilizer itself could also decrease the risk.

“If you’re supplying fertilizer with seed, our greatest concern is seed injury through salt stress,” Mullen says. “This product has a lower salt index. We’re adding an elemental sulfur, which doesn’t contribute to salinity of fertilizer material.”

Smart Nutrition MAP + MST has a salt index of 22.4 compared to other products with phosphate and sulfur analysis, which means reduced risk for burning seed and impeding seedling development, says Michel Poiron, a marketing representative for Nutrien based in Manitoba.

Preston says there are safety benefits for farmers as well – a new process from Nutrien means the product produces less dust, and due to its ability to accumulate less moisture, should experience less caking in storage.

Agronomic tips
According to the Canola Council of Canada website, signs of sulfur deficiency in canola can include small, narrow and often cupped top leaves, prolonged flowering, small or paler yellow flowers, short pods with little or no seed set or patchy fields. It’s most common in sandy soil with low organic matter.

“A lot of times, in a crop like canola, that looks like flower abortion or very small plants, [particularly] in lower areas or on top of knolls,” Preston adds. “Canola responds to sulfur better than other crops in the rotation. If they’ve had issues in the past with blending urea or other N products with ammonium sulfate, MAP + MST is a great option.”

In more northern latitudes, oxidation happens more slowly due to lower temperatures. This means producers should err on the safe side when it comes to crop nutrient demands, at least initially, Poiron explains.

“You need to allow appropriate time for it to release and become available. We’ve built a recommendation for the industry and we recommend that in the first and second year of use on canola you complement the product with ammonium sulfate, and perhaps after that the product will be self-standing. We have ongoing research to answer that question,” he says.

In other crops – like wheat and oats – sulfur availability is much less of a concern. But canola, which requires more sulfur, could need a buffer.

But Poiron adds that the product’s analysis meets crop fertility requirements for each crop, and blending typically isn’t necessary beyond the first two years.

It’s also one of the most nutrient-dense products on the marketplace, which could mean cost savings on a pound-per-acre basis.

Poiron says the product could mean a simpler approach to fertilizer for many Prairie growers. “All of the crops we grow require sulfur and phosphorus. The analysis really fits the requirement for canola, wheat, corn and soy. The grower can pick this up and know that the analysis can be applied to all crops – you potentially may not even need to blend the product, depending on your fertility requirements. We’re trying to simplify the process.”