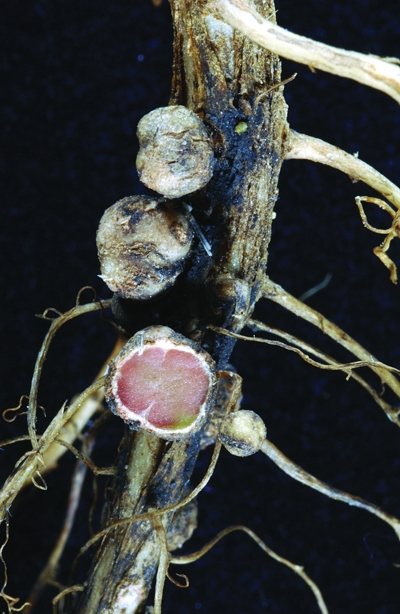 To maximize yield, many soybean growers are choosing to protect their investment in soybean seed with seed-applied insecticides and fungicides. Now, they are adding an inoculant, as they see the evidence that it can provide profitable returns. “This year, the yield response from inoculants seems to be similar to other years, maybe even a little more,” says Horst Bohner, provincial soybean specialist with the Ontario Ministry of Agriculture, Food and Rural Affairs (OMAFRA). That means growers who used an inoculant saw an extra 1.25 bushels on ground that had previously grown soybeans. The benefit is even greater on acres that have not grown soybeans for a number of years. The extra 1.25 bushels per acre easily delivers a significant return on investment for the relatively inexpensive inoculant. “Yields are higher, which means the plants would have needed more nitrogen and could have benefited from more nodules too,” says Bohner.

It pays to give soybeans the best chance to yield, especially the way today’s newest varieties are performing. “More producers want insect and fungicide seed treatments and find it convenient to add an inoculant as well when they buy their seed,” says Bohner.

Soybean producers have three main inoculant options: sterile peat, liquid or they can use pre-inoculated seed. But they often use the same formulation, year after year. Research shows that many growers do not know much about inoculants and want to know more. In a 2009 Ipsos Forward survey of 155 soybean growers in southwestern Ontario, 55 percent of non-users of inoculants knew very little or nothing about soybean inoculants with 71 percent in total interested in learning more.

The use of pre-inoculants, where the inoculant is added directly to the seed by the seed company, is increasing. Mark Kerry, Dekalb area sales manager for Monsanto, says they saw a tremendous increase in sales of BioStacked HiCoat N/T S225 pre-inoculant in Ontario in 2009. “Farmers are realizing they can get inoculant and both their insecticide and fungicide seed treatments in the bag with the best opportunity to produce the highest yield,” says Kerry. “It’s the convenience factor. And with the higher value seed, producers are recognizing the value of treating that seed with a pre-inoculant, in addition to an insecticide and fungicide.”

Each formulation of soybean inoculant has different benefits, depending mainly upon the number of acres farmed and the grower’s planting setup.

The HiCoat N/T S225 pre-inoculant option from Becker Underwood can have up to 225 days’ viability on the seed. It was launched in 2009 and is a BioStacked inoculant, meaning that it uses additional beneficial micro-organisms that work together with the soybean root system to enhance yield. It is an “in-the-bag” solution, which for many growers will mean a more convenient way to use this new generation of inoculants. “I’m thinking next year, producers who got their seed pre-inoculated will be saying, ‘This worked well for me last year, why change the program this year?’” says Kerry. “We’re also seeing soybeans getting planted earlier. Years ago we’d see corn planted first and then in mid-May the soybeans would go in. Now we’re seeing soybeans being planted at the same time as corn. Pre-inoculated seed is all about speed and timing and working with a more convenient package. Our customers are telling us that it makes planting go much more quickly.”

Other inoculant formulations, such as peat and liquid formulations are farmer-applied inoculants. Generally, these formulations are viable on-seed for a far shorter period of time than a pre-inoculant. “The choice of inoculant formulation is heavily dictatedby the requirements of the operation,” says Piran Cargeeg, technical team leader for Becker Underwood in Canada. “If it’s a larger operations and they have a short planting window, they generally want to get rid of any possible slowdowns while loading seed. With HiCoat N/T S225, growers can get their seed treated well
before planting.”

A new line of thinking
Growers are probably most familiar with peat formulations, some of which have evolved significantly and are now produced in a sterile-peat formulation. By sterilizing the peat, any organisms that would otherwise kill the rhizobia are removed. This means there are more viable rhizobia in sterile peat than were previously carried. Still, rhizobia do not survive for long in peat. Once mixed with the seed, a grower should plant it within 24 hours.

Liquid has a longer life on-seed. Growers generally apply liquid inoculant to seed by hanging a bladder over the auger and letting a calibrator dribble it on the seed as the seed moves into the seed drill. It can also be applied professionally by a seed treater.

Another option to consider when choosing an inoculant is Becker Underwood’s next generation of inoculants, called BioStacked, that includes a second biological. This means it contains a second organism, Bacillus subtilis, which acts as a nodulating trigger, as well as Bradyrhizobium japonicum, the active ingredient in all soybean inoculant products that is responsible for fixing nitrogen.

Bohner says that the second biological may also help yield through disease suppression. “At the end of the day, the only thing I really care about is yield response because that’s what pays the bills,” he says. “But my sense is that it does bring something to the table.”

Pre-inoculants, like HiCoat N/T S225, are applied by the seed company. If growers do not order seed pre-inoculated from the seed company, they can still get it treated by a professional seed treater or suitably equipped retailer.

It is in the seed company’s best interest to make sure the seed treaters are compliant with best practices. For instance, Becker Underwood certifies all seed treaters that apply its product to ensure that they are treating the seed in a manner that maintains the Canadian Food Inspection Agency (CFIA) label guarantee. The CFIA tests all inoculants to ensure that they have the minimum number of rhizobia as guaranteed on the label.

The Ipsos Forward study indicates that the majority of soybean inoculant users prefer to have the inoculant applied on-farm.

However, a significant number of users (34 percent) prefer a commercial seed treater to apply it, particularly for larger operations (41 percent of 200-plus acre growers versus 19 percent of growers with fewer than 200 acres). The two key reasons for using commercially treated seed were convenience and better coverage of the seed.

As growers push to become more efficient around soybean planting, expect to see increased use of pre-inoculants or seed-treater-applied liquid inoculants.