When the cereal leaf beetle (CLB) was first spotted in Alberta in 2005, the then-regulated pest was met with consternation by western Canadian producers. CLB can cause significant damage to all crops in the grass family, even forages, and yield losses in affected areas of the United States have reached 50 per cent. 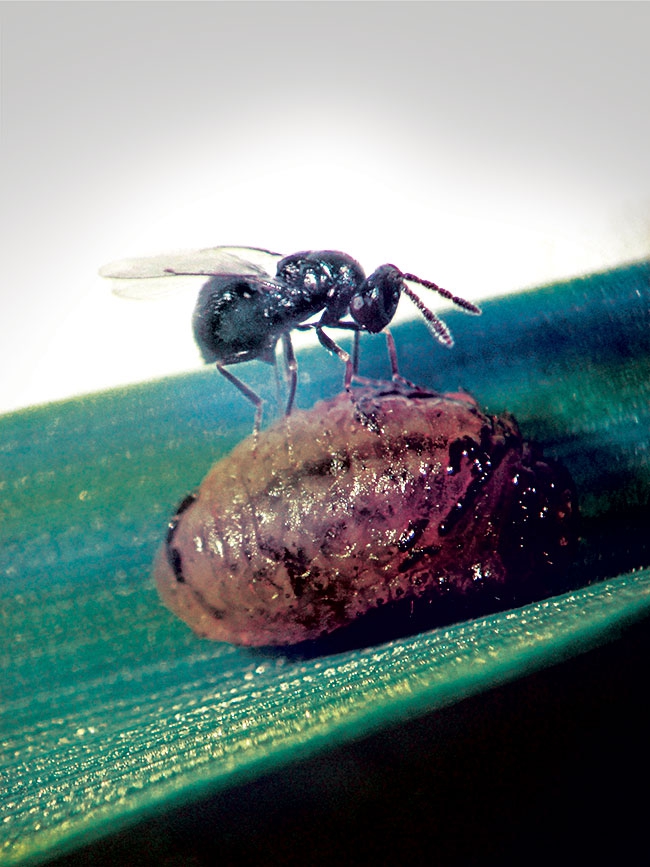 But close on the heels of the discovery of CLB in Alberta came a second, mitigating finding: CLB’s chief natural enemy, a tiny parasitoid wasp called Tetrastichus julis, had followed it to the province.

T. julis works in the brutally effective fashion of all parasitoid wasps, laying eggs inside the host’s larvae that consume them from within until the larvae die.

Héctor A. Cárcamo, an insect pest management researcher with Agriculture and Agri-Food Canada (AAFC) based in Lethbridge, Alta., is head of AAFC’s T. julis biological control program. His team rears populations of the wasp and sends them to any areas in Western Canada that experience problems with CLB.

So far, T. julis populations have been steadily increasing. About nine per cent of CLB larvae in the Lethbridge area contained the parasitoid in initial surveys. Now that figure is higher than 40 per cent, Cárcamo says.

The wasp has generally followed the spread of CLB into some other areas of Western Canada as well. To make sure it gets to all of them, Cárcamo’s lab has sent supplementary wasps to Beaver Lodge, Alta., several locations in Saskatchewan and the Treherne and Swan River areas in Manitoba.

But though CLB is under control for the time being, Cárcamo’s lab has not slowed its research efforts.

Last year, Cárcamo’s then-graduate student, Swaroop Kher, published a study in Environmental Entomology looking at the spatiotemporal dynamics of interactions between CLB and T. julis, and the influence of plant vigour traits in their density. In other words, they asked whether good plant vigour means higher levels of colonization of the pest and its parasitoid.

Kher sampled once or twice per week for about six weeks and catalogued plant vigour expressed in crop growth, plant density, basal stem diameter, number of leaves per plant and height. The team sent samples to a lab in British Columbia for nutrient analysis.

“Our hypothesis was that the CLB populations colonize only those areas in the field that provide more nutrition to the insect,” says Kher, now a pest prediction-modelling agrologist for Alberta Agriculture and Forestry. “We were trying to see how the plant vigour is distributed in the field and which areas were colonized, so if all those parameters were at the higher side, the patch would be called vigorous.”

What they found was what they expected: areas with good plant vigour were correlated with high beetle density; parasitoid populations were also high in those areas.

Kher’s recommendation to producers based on these results is to maintain good plant vigour and avoid chemical interventions, as T. julis is adequately managing CLB populations in most areas. [Click images below to expand.]

Landscape factors
Cárcamo’s lab is also partnering with researchers at the University of Manitoba to investigate the link between landscape features and CLB and T. julis populations. The project is funded by AAFC’s Pest Management Centre, which seeks alternatives to reduce pesticide use in Canadian cropping systems.

According to Alejandro Costamagna, an assistant professor with the University of Manitoba’s department of entomology, the project is investigating how the various types of habitats around cereal fields in Alberta impact the abundance of CLB and parasitism of T. julis.

Costamagna’s graduate student, Arash Kheirodin, who collected data from more than 70 sites near Lethbridge in 2014 and 2015, is leading the project. Kheirodin will look at land cover types including nearby crops, natural habitats, riparian areas and grassland/pastureland, and calculate habitat diversity using diversity indices.

“We haven’t exhausted all the important factors to test yet. Once we have all the data we will be able to see which landscape variables are more explanatory,” Costamagna says.

“The common wisdom has been that if you release T. julis in very dry areas, the parasitoid doesn’t do well, but no data has been published yet to suggest that,” he explains. “Once we have the data we can be more strategic about release. That’s the ultimate goal.”