Flea beetle is still the number one insect pest of canola in Manitoba, according to industry experts. 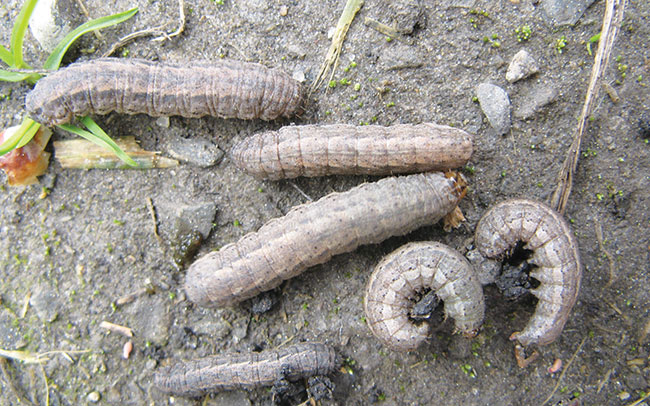 There are dozens of cutworm species in the Prairies, but two in particular – including dingy cutworm, pictured here – were responsible for most damage in Manitoba. Photos courtesy of john gavloski.

In 2019, poor growing conditions and a lack of early season moisture meant canola had a prolonged seedling stage and was more susceptible to flea beetle damage early in the year, says John Gavloski, entomologist for Manitoba Agriculture and Resource Development.

Some producers sprayed multiple foliar applications on flea beetles in parts of the province, according to Canola Council of Canada agronomy specialist Keith Gabert.

Here are the top five insect pests of canola to watch in Manitoba, and strategies for dealing with them in 2020.

Flea beetle
There’s no provincial monitoring program for flea beetle. In some ways, damage from the insect is dependent on weather, Gavloski says. In 2019, the canola crop didn’t get enough soil moisture early in the year, prolonging the seedling stage, and seed treatments weren’t adequate for flea beetle control. Lack of precipitation meant plants could be slow to emerge, and Gavloski says some provincial agronomists were concerned producers mistook uneven emergence for flea beetle damage. But, Gabert adds, poor growing conditions combined with low plant stands are the first warning signs that producers may require a foliar insecticide application to manage flea beetles.

“These conditions allow flea beetles the opportunity to consume the existing cotyledons faster than the plant can grow and recover from feeding damage,” he says. “This is particularly true if the weather warms up rapidly in the absence of good soil moisture, and the flea beetles’ consumption speeds up to match warm conditions.”

While scouting fields, producers should pay attention to “shot-hole” feeding damage by flea beetles, which intensifies roughly three weeks after the seeding date, when seed treatments often start to wear out, Gavloski advises. Plants are most susceptible during the cotyledon to four-leaf stage.

Under cool or windy conditions, Gabert says flea beetles may also hide closer to the soil surface and feed on canola stems. It isn’t common, but this type of damage should be treated as another potential stand reduction threat.

Cutworms
In 2019, cutworms were a concern in many Manitoba canola fields, resulting in insecticide applications and even some reseeding in the northwest, southwest, central and Interlake areas.

There are dozens of cutworm species in the Prairies, but two in particular – redbacked cutworm and dingy cutworm – were responsible for most damage in Manitoba (although Gavloski notes some fields did have a complex of cutworm species). When there are high numbers of both species, feeding damage seems to be prolonged, he says, adding the numbers were “incredibly high” this year.

Producers should scout early, as soon as the crop starts coming up, and thoroughly, because damage can be patchy, Gavloski says. If damage is patchy, producers have the option of spraying the patches rather than the entire field.

Once economic thresholds are reached, insecticides should be sprayed as late in the day as possible for maximum efficacy, as cutworms are nocturnal.

“Cutworms are difficult to predict, so purchasing an upgraded seed treatment effective on cutworms in 2020 in response to 2019 damage is not a guaranteed return on investment, but it definitely provides peace of mind should a cutworm problem arise again,” Gabert says. 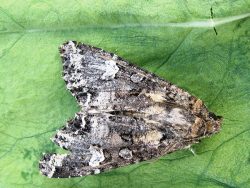 Bertha armyworm is nocturnal. The moth (pictured here) is much bigger than the diamondback moth. 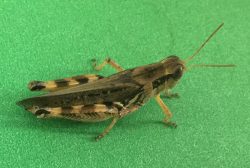 Grasshoppers were widespread in Manitoba in 2019. Populations build during hot, dry summers, and the province has seen three dry years in a row.

Diamondback moths
Diamondback moths do not overwinter well in Western Canada and typically blow in from the southern United States; thus, infestations are difficult to predict. But the pest is monitored by the Prairie Pest Monitoring Network (PPMN) across Western Canada from the Peace River region of B.C. to Manitoba, and risk forecasts are posted weekly during the growing season.

The earlier in the season the adults arrive, the more generations the pest can complete in a growing season, resulting in greater overall risk of defoliation, Gabert says.

Scout fields from June to August. When scouting, shake plants to dislodge and count the larvae. The economic threshold has been reached once there are 20 to 30 larvae in a square foot of plants.

Natural enemies, including parasitic wasps and insect predators, are key to controlling diamondback moth, and in some cases provide adequate control without the need for an insecticide application, Gabert says. “We’ve seen expected populations of concern collapse with natural control measures,” he says.

Bertha armyworm
Bertha armyworm, a type of “climbing cutworm,” is also monitored by the PPMN. Gabert says most traps in 2018 and 2019 showed the insect still in the low risk category, with just a few traps having counts in the uncertain and moderate risk categories. But as a cyclical pest, it could “easily return to more widespread damaging levels,” he says.

Gavloski says there have been higher numbers than usual over the last two years with occasional reports of spraying, so producers should stay on the alert and continue scouting.

Bertha armyworm is nocturnal. Older larvae feed during the night and hide under debris or in the soil during the day. The moth is much bigger than the diamondback moth.

Producers should begin scouting for larvae after peak flowering. When scouting, carefully examine both plants and soil and leaf litter for larvae.

As with diamondback moth, under the right conditions natural enemies can control bertha armyworm without the need for insecticide, so spraying should occur only after economic thresholds have been reached.

Grasshoppers
Gavloski says grasshoppers were widespread in Manitoba in 2019. Populations build during hot, dry summers, and the province has seen three dry years in a row.

The best time to start scouting for grasshoppers is early June in areas that had lush vegetation the previous August and September, Gavloski says, because that’s where they’ll have laid eggs. Sometimes this can mean field margins or ditches.

“You’re trying to figure out if there are areas that have heavy populations of nymphs emerging. Grasshoppers are much easier to control when they’re young than when they’re adults,” he says.

Selective insecticides are also available, including EcoBran, which includes carbaryl pesticide and an attractant for grasshoppers on flakes of bran. It only affects grasshoppers and a few other insects that would consume it, Gavloski says. The Group 28 insecticide Coragen is also semi-selective and will not harm bees or parasitic wasps.

Gabert says Canola Watch continues to be a useful tool for producers looking for weekly updates on these and other pests of canola by province during the growing season. Sign up at canolawatch.org.