First, stop wasting money on saline areas. Then, get something growing. 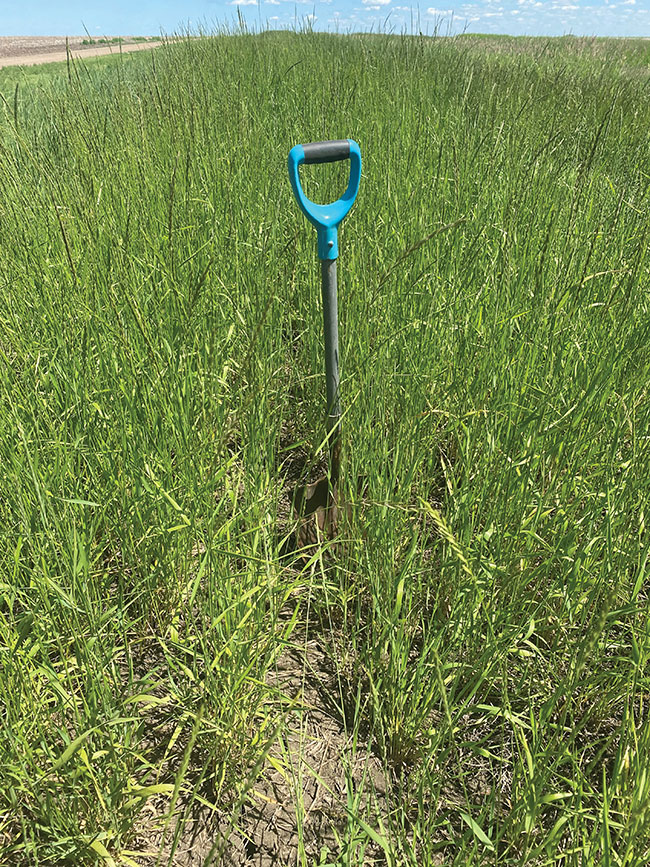 AC Saltlander grass in a salinity/forage trial one year after establishment on saline soil with no kochia present even without herbicide application. Photo by Lyle Cowell.

The definition of insanity is said to be doing the same thing over and over again and expecting a different result. That would be the case with saline patches in a field if annual cropping practices keep pouring on the inputs in the hope of a net return from these unproductive areas.

“We have to at least acknowledge that we have to do things differently in saline areas,” says Lyle Cowell, manager, agronomy solutions in northeast Saskatchewan, with Nutrien Ag Solutions in Tisdale.

“I really believe, especially as we see increasing prices to grow annual crops, it is very likely we can make more money if we farm less land,” he says.

However, there aren’t any easy fixes to salinity with soil amendments. Be wary of someone selling a product that claims to remove salts from the soil: “That’s impossible. One of the reasons is the tremendous amounts of salts in a saline soil,” Cowell says. “A loam soil with moderate salinity has over eight tonnes of salt per acre in a two-foot depth.” 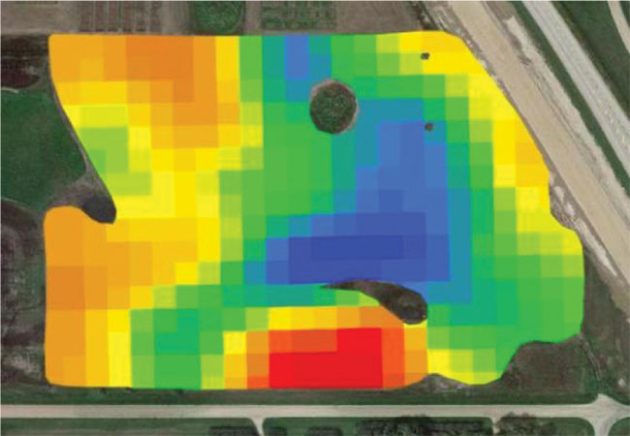 Case study one: variable rate inputs
One of the first steps to making saline areas more productive – or less costly – is to stop spending crop inputs on those areas of the field that aren’t productive. Variable rate management recognizes that salinity is responsible for varying yields. So inputs like nitrogen can be varied to better recognize the yield potential in that area.

An example comes from the University of Saskatchewan’s Goodale Farm, on a Dark Brown, sandy loam soil. Cowell did a field study with fourth-year agronomy students at the College of Agriculture. They dug soil pits, took drone and NDVI images, and soil tests. From the drone photos, there were obvious signs of salinity. These saline areas were also well correlated with the NDVI images.

The students were split into groups and assigned to different areas of the field to soil sample based on NDVI grouping, while two groups sampled the field randomly. The NDVI area showing the poorest crop growth (red colour) had a EC (1:1) ms/cm rating of 4.7, rating it as severe. The next two poorest areas (orange/yellow and green NDVI colours) were rated as moderately saline, and the best (blue) was rated at 1.0 EC as slight. The random test was rated as non-saline.

“Random sampling tends to tell us randomly nothing,” Cowell says. “We know that the random sample would be incorrect.”

Similarly, nutrient availability varied by the NDVI zones. The three zones with high salinity all had sulphate-sulfur availability more than 800 pounds per acre (lbs/ac). Cowell explains that this is to be expected as most of the salts in the saline areas are sulphate salts. Even the random sample had high sulphur levels of 442 lbs/ac.

The N levels were also higher in the saline areas. Annual fertilizer application, poor crop growth, and low N uptake and removal by the crop meant high levels of N were left over each year in the saline areas, resulting in higher soil test N values than the more productive areas of the field. Approaching this field from a variable rate perspective, estimated wheat yield loss could be predicted based on the salinity rating. This combined with the soil test N results can then provide recommendations for variable rate fertilizer application based on NDVI zones.

“Various platforms of variable rate management do this. It’s really not that hard to put together these concepts of the impact of salinity on yield, and then estimate how to manage nitrogen fertilization,” Cowell says.

Yield targets in each zone are set, and N fertilizer recommendations developed for those targets. In this particular field, the severe “red” zone would receive no N fertilizer, the “orange/yellow” five
lbs/ac, 56 lbs in the “green” zone, and 103 lbs in the non-saline “blue” zone where the yield potential was estimated at 60 bushels per acre (bu/ac).

Looking at profitability, based on $250 per acre input costs for wheat, Cowell says the severe areas would lose $185 per acre, the moderate areas would be “recreationally farmed” as they would be breaking even, and the most productive area of the farm would net $140 per acre. That would compare to $75 per acre for the random sampling approach. Using 2022 prices, the differences in profitability between zones would be even more dramatic.

“There’s no point in farming land that will consistently lose money,” Cowell says. “You would be making more money farming the productive areas even though they are a relatively smaller area of the field.”

Case study two: forages
The next step past variable rate management of the saline patches is to grow species that tolerate salinity quite well. If yield loss in those areas are over 80 per cent for wheat and canola, what crops could be grown there? Some grass species can tolerate severe levels of salinity. AC Saltlander green wheatgrass is one of the best saline-tolerant forages.

Cowell points to another example where salinity was severe. It was on land near Saskatoon, which had two sloughs on it with salinity surrounding them. At Slough 1, EC levels were mostly over 10 and up to 26 at one sampling site.

“One year later after planting AC Saltlander green wheatgrass, stand establishment, while not perfect, still resulted in some grass growing where nothing had previously grown,” Cowell says. “This is the first step to reclaiming saline areas.”

An adjacent slough had lower levels of salinity in the surrounding soil with EC values around 10. A blend of grasses including Saltlander was sown to target a higher yield potential. One year later, the saline land had a highly productive hay stand yielding two large round bales per acre.

“If we manage saline areas appropriately, this is a win for the farmer. In Saskatchewan we had a tremendous shortage of hay in 2021. We should never have a shortage of hay because we have literally millions of acres of land that would be very well suited to hay that is poorly suited to annual crops,” Cowell says.

“It is also a win for the environment for groundwater and other portions of the soil environment. And it really should be a part of the climate conversation to convert a lot of this land to perennial species.”