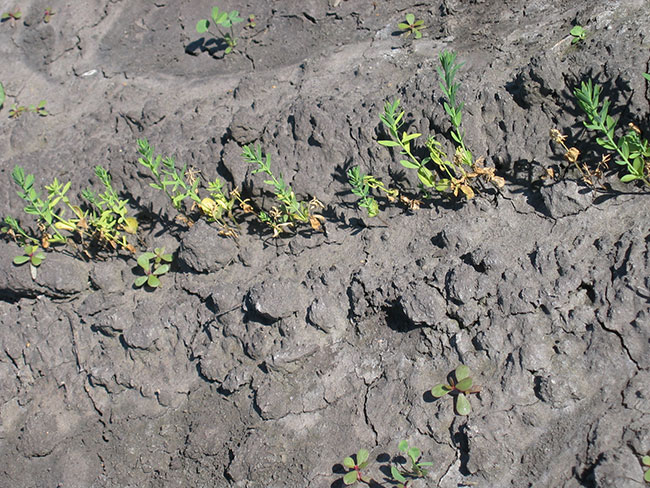 An integrated approach has kept flax seedling blight and root rot from impacting production. Photo courtesy of the Flax Council of Canada.

The good news about seedling blight and root rot in flax is that the occurrence is relatively low, and it can be managed to reduce the impact of the disease complex. As a result, rarely is there bad news to report.

“We see little root rot in flax in our disease survey and some years none. We conduct the survey when the flax plants are mature or maturing in August and September, which plays a role as well,” says Cory Jacob, provincial specialist, oilseed crops with the Saskatchewan Ministry of Agriculture in Regina.

In 2019, there was a concern that root rot was impacting a flax crop near Weyburn, Sask., possibly caused by Rhizoctonia species. It was identified in the lab from some of the fields affected, but so were some other pathogens and saprophytes, so it was unclear if Rhizoctonia was the only reason for the spotty emergence.

Seedling blight and root rot can be caused by fungal species of Fusarium, Pythium and Rhizoctonia. In flax, Rhizoctonia solani is main pathogen, and survives as a composite of strains that differ in host range and pathogenicity. Strains attacking alfalfa and field peas also attack flax, and loose, warm and moist soils favour the development of the disease.

Yellow-seeded flax varieties are more susceptible to cracking and splitting of the seed coat, making them more vulnerable to infection by root rot pathogens. This may have been a contributing factor in Weyburn in 2019, as the affected field was a yellow flax variety.

Rhizoctonia solani infects flax at early stages of development, destroying the root and causing thinning, and even death of the seedling. Infected seedlings may occur singly or in patches. Roots of affected plants show red to brown lesions, and may later turn dark and shrivel. Blighted seedlings turn yellow, wilt and die.

The major reason root rot in flax has not become a major issue is that seedling blight and root rot can be controlled with a combination of farm practices. Jacob recommends using Certified seed of a recommended variety that has good germination and vigour. Combine settings at harvest should be adjusted to reduce cracking of seed.

A fungicide seed treatment should be used. At least three years between flax crops is also recommended, and legumes and sugar beets should be avoided in rotation. Flax sown on cereal stubble is a good practice, and summerfallow should be avoided. Seed into a firm seedbed and use recommended fertility practices to promote vigorous stand establishment.

Seedling blight and root rot of flax can be confused with flax wilt (fusarium wilt). Flax wilt is caused by Fusarium oxysporum, a common pathogen that causes wilt in many field crops. Early infections may kill flax seedlings shortly after emergence, while delayed infections cause yellowing and wilting of leaves, followed by browning and death of plants. The tops of wilted plants often turn downward and form a “shepherd’s crook.” Affected plants occur more commonly in patches, but may also be scattered throughout the field. The most important control measure is the use of available resistant or moderately resistant varieties. A three-year crop rotation is recommended, and a seed treatment with recommended fungicides may protect the crop from early infection at the seedling stage and helps maintain good stands and seedling vigour.

Flax wilt has typically been of little concern. In the 2020 disease survey, in Saskatchewan and Manitoba, flax wilt was found on eight per cent of all flax crops (18 per cent in Manitoba, six per cent in Saskatchewan), and the prevalence was only slightly higher than it was in 2019. The low prevalence of flax wilt could be attributed to the hot, dry weather conditions in 2020.

With little impact of seedling blight, root rot or fusarium wilt on flax production, farmers and agronomists have found ways to use integrated management practices to keep the diseases under control.