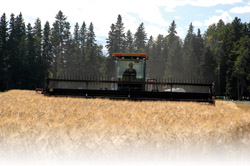 There is risk associated with every aspect of business, whether you are farming
or in some other enterprise. There is no possible way to eliminate all risk,
so it is crucial that farmers manage the risks associated with their farms.

Understanding these different risks and where they present themselves is critically
important when trying to manage risk.

Top of mind when talking about risk in farming is financial risk. Risk in the
marketplace is also a major area of focus and an area in which many farm business
managers commit less than adequate time.

Two areas of risk that receive less attention, but potentially can have disastrous
consequences, are event (or crisis) risk and asset risk. The BSE situation is
a classic example of event risk, but for purposes of this article, we will use
two other real life examples.

The first example is a Manitoba PMU (Pregnant Mare Urine) producer. The PMU
producer had a contract to deliver product to the processor in Brandon. The
producer had recently renovated the existing facility, including upgrades in
the storage area, and added an extension to the building to accommodate additional
mares. These decisions were made in the belief that the industry was relatively
stable and there was opportunity to expand production.

The producer had been a large grain farmer and in the late 1980s decided to
venture into the PMU industry as a diversification effort and to address the
risk he believed existed in grain farming. Over a period of about 10 years,
the farmer increased his focus in the PMU business and gradually phased out
of grain farming. The PMU industry was challenging with increasing public scrutiny
on animal welfare and increasing processor focus on product quality and standards.
But, the return on investment and labour was quite good.

The second example is the potato producer. The farmer was almost completely
focussed on potato production having, over a period of years and similar to
the PMU producer, phased out of grain farming. There was excellent opportunity
in the potato business, but potato production is extremely demanding both from
a labour and management perspective. Again, similar to the PMU industry, the
processors were, in response to their customers and ultimately the consumer,
demanding more intensive management and better quality. The producer had expanded
production to more than 600 acres and was quite heavily leveraged (financed).
There is a large capital investment required to be in the potato business and
the annual operating investment costs can exceed $1300 per acre.

In both instances, the farms were well established and the farmers had considerable
experience in their respective sectors. In both instances, the processor informed
the farmers that their contracts were being cancelled. Also in both examples,
the notification came after the annual production cycle had started. In the
PMU case, the mares were already in the barn and production had commenced and
in the potato case, some of the potatoes had already been planted and more of
the land had been prepared for planting. Each farm suffered a significant loss
in equity and each farm had its existence threatened.

In each of these situations, the event was beyond the control of the farmer.
This is the very essence of risk. Things coming out of the blue, things over
which the operator had no control. So: what to do?

In managing risk in your farm, it is far better to be proactive and as prepared
as possible to deal with risk as it occurs, than it is to be reactive. But as
in these situations, things can happen that can only be handled reactively.
Whether you are trying to be proactive, or are faced with reacting to something
that has already happened, there is a process that can be used to help you through
the situation.

Identification
Requires that areas where risk can exist within your business be identified.
This is a process that is best managed by talking to an advisor who has a good
understanding of your business and the industry in which your business exists.

Assessment
Requires that the impact of the risk be quantified and qualified.

Quantified from a financial perspective: the potato farmer had to determine
what the financial impact was, given the investment he had already made in the
crop and what impact this would have on his ability to meet his financial commitments.

Qualified from a personal, family and business perspective: for example, in
the PMU situation, the event had impact on the farm family because there was
a process underway to begin to transfer the ownership and management of the
business to the next generation. The cancellation of the contract required that
the farm family take another look at the plan to transfer the farm.

Mitigation
Plans must be developed to manage or minimize the impact of the risk. Depending
on the risk identified, the plans can range from being quite basic to quite
detailed.

Implementation
If you are reacting to something
that has happened, then you will be actually putting the plan into action. If
you are proactively planning for potential risk, then the implementation step
is simply to document the plan in writing.

Evaluation
On an ongoing basis, plans should
be evaluated to determine their effectiveness in dealing with real or potential
risk.

Both the PMU and potato farmers are managing through the events that hit them
unexpectedly. Neither had planned for a risk of this magnitude and both will
admit that planning to manage risk within their businesses was less than adequate.

Given the capital investment required to be in the business of farming and
given the very nature of farming where risk is high and margins are narrow,
it is increasingly important for farmers to take a more proactive approach to
managing risk within their business! –

Look for the second installment in this risk
management series in the next issue of Top Crop Manager, Focussing on
succession planning.


Related
Managing risk on the farm: tools and strategies
Make the business choice
Hiring business management advisors on the farm
What is your business safety plan?