Defense is the best option. 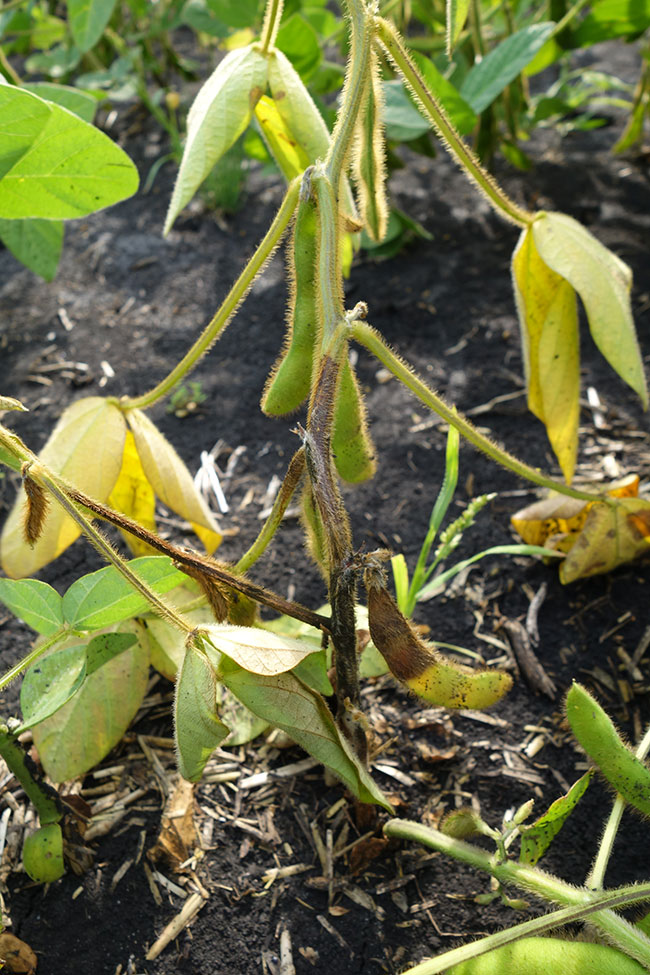 A defining symptom is a dark brown canker that begins below the soil level and moves up the stem. Photo courtesy of Debra McLaren.

Once you have Phytophthora root rot (PRR), it’s not going away. As a result, strategies to reduce the impact of PRR on soybeans are the best option.

“An important factor with this plant pathogen is the production of the thick-walled oospores that are adapted for overwintering and survival under adverse environmental conditions – they are able to survive for long periods of time in soil,” says Debra McLaren, research scientist, crop production pathology with Agriculture and Agri-Food Canada in Brandon, Man.

Phytophthora root rot, caused by Phytophthora sojae, is a root and stem disease that attacks primarily soybeans. It is referred to as a water mould, or Oomycete and overwinters in the soil as oospores, which germinate and produce sporangia that release zoospores. Zoospores can swim short distances of about one cm. They are attracted to root exudates from soybean roots. The zoospores infect the soybean root, causing root and stem rot. As the zoospores are motile, soil must be flooded or saturated with water for the zoospores to swim.

The disease is now becoming more of a concern on the Prairies, and the importance of disease surveys for assessing the incidence and diversity of this pathogen cannot be overemphasized. Surveys of Manitoba fields have been conducted since 2014. Saskatchewan was added in 2017 and Alberta in 2019. In Manitoba in 2016, 40 fields were surveyed, and 38 per cent had PRR. In 2017, 35 per cent of 89 fields had PRR, and in 2018, 30 per cent of 96 fields had PRR. That dropped to five per cent in 2019.

Results for the 2020 survey have been delayed due to restrictions in place because of COVID-19. McLaren says the drop-in incidence in 2019 was likely due to the drier growing season.

“Warm soils and periodic rains at weekly intervals where saturated soils develop are ideal conditions. It commonly occurs on heavy, compacted soils, and in low and wet spots in the field,” McLaren says. “2019 was a dry year so we probably saw fewer issues.”

Other favourable conditions include soils that have an impervious shallow hardpan that is subject to saturation and flooding. It can also occur in well-drained fields where the pathogen is present and soils are saturated from seven to 14 days of heavy rain or irrigation.

Unlike other root rot pathogens, PRR can infect soybeans at any development stage. Early in the season, seedlings can be attacked and killed in the ground or soon after emergence, causing seed rot, pre- and post-emergent damping off and reduced stands. Water soaked lesions on the seedling progress up the stem causing yellowing of leaves. The plant wilts and dies, but leaves remain attached.

Mid- to late-season symptoms cause stunting, as well as root and stem rot. A chocolate-brown canker develops up the stem. The plants wilt, leaves turn yellow, droop and remain attached to the stems after the plant dies.

“The most diagnostic feature with Phytophthora root rot is the dark brown canker that begins below the soil level and moves up the stem,” McLaren says. “This is different from stem canker, another soybean disease, where there is green tissue above and below the canker.”

The disease can be patchy in the field, reflective of soil moisture conditions. Yield losses vary depending on the field, environmental conditions, and soybean variety but amount to $50M annually in Canada. In the U.S., McLaren says yield losses can range from eight to 11 per cent

Genetic resistance to P. sojae is available. There are different major “Resistance to P. sojae” (Rps) genes available in soybean varieties, and these major genes can prevent the disease from developing. Phytophthora sojae occurs in the soil as populations of different races and therefore it is critical to determine the current races of P. sojae in Canadian soybean fields so that growers can select the best varieties for their operations.

McLaren works with Richard Bélanger at Université Laval in Quebec on a nationwide screening program to determine the current races of P. sojae that are in soybean production regions across Canada. McLaren’s team screens the samples collected in the western Canadian survey for PRR. Every isolate of P. sojaeis screened against soybean lines, each containing a different Rps gene, to confirm the isolate’s race or pathotype. There are more than 50 described races, but many more pathotypes reported throughout the U.S. and Canadian soybean production regions. Because there are so many races and the numbering system previously used has no biological meaning, plant pathologists have moved to a pathotype designation that lists the Rps genes that can be overcome by the P. sojae isolate. For example, ‘pathotype 1a, 1c, 7’ was originally called Race 4. This pathotype can overcome Rps genes 1a, 1c, and 7.

In Ontario and the U.S. prior to 1990, simple pathotypes that were only able to defeat one or two Rps genes were identified. Over time, pathotypes that are able to overcome more Rps genes have developed, and different pathotypes have been reported within the same field.

This shift in pathotypes is partially because of selection pressure. Many soybean varieties have a single major Rps gene. Growing a variety with the same Rps gene over the years allows other pathotypes to evolve in the field to eventually overcome that Rps gene. Tight rotations and higher rainfall over a few years can speed up the shift.

“Some of the resistant genes have been effective for many years with a single gene having lasted for eight to 15 years. But it seems like weather changes and increased precipitation means the races are evolving and are becoming more complex,” McLaren says.

From 2014 to 2016, ‘pathotype 1a, 1c, 7’ was predominant in Manitoba. In 2017 the predominant pathotype had shifted to ‘1a, 1b, 1c, 1k, 7’ (race 25). In 2018, the predominant pathotype was able to overcome two additional Rps genes: Rps1b and Rps3a. Screening results for 2019 and 2020 are ongoing but have been delayed due to COVID-19. Seed Manitoba lists the varieties with resistance to PRR, and the major Rps gene(s) the variety carries. Genes that are available include 1a, 1c, 1k, 3a or 6 either as a sole resistant gene, or stacked with another resistant gene. Several varieties registered in Manitoba carry a single Rps6 gene. These lines would be effective against all pathotypes identified in the surveys of Manitoba soybean fields. 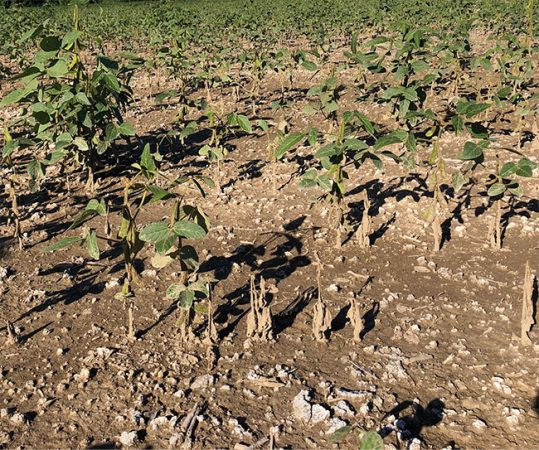 “Major resistant gene can help protect against specific pathotypes throughout the entire growing season so the plant is protected from seedling as well as mid and late-season infections,” McLaren says.

In parallel with the screening program, Laval University is developing a molecular diagnostic assay to help growers select the cultivars with the proper Rps genes for their specific field.

Another type of resistance, also invaluable in limiting the damage caused by P. sojae, is partial resistance, also known as quantitative resistance. It is controlled by several minor genes, is a non-race specific resistance and places less selection pressure on P. sojae populations.

“It is believed to have broad-spectrum effectiveness against all races of the pathogen, but it is incomplete resistance because some level of disease can still occur,” McLaren says.

When diverse pathotypes are present, partial resistance can provide additional protection that major genes cannot when overcome by the diverse pathotypes. However, partial resistance develops after the cotyledons and first true leaves are visible and because it takes time to develop in the plant, seed treatment with a fungicide for early season protection against PRR is an important management tool. McLaren says under high disease pressure, seed treatments have increased yield in partially resistant cultivars. And under lower disease pressure, a susceptible variety with partial resistance can yield as much as a resistant cultivar.

A resistant cultivar with an Rps gene that is effective against the predominant strains in the field is the foundation of disease management. McLaren says research is continuing with the collection and characterization of isolates of P. sojae from western Canadian soybean fields to provide information to growers on the pathotype diversity that exists. In addition, research to develop molecular tools that can be used to reduce the time required for pathotype determination in a field is ongoing at the Université Laval and will be available to research partners in Western Canada in the near future.

Reduced tillage can increase the risk of disease because no-till areas are more easily saturated, creating a better environment for the pathogen. Arguably, though, reduced tillage may bring other soil benefits that may outweigh the increased disease risk. Field activities that reduce compaction are also a good strategy. The disease is usually worse in tractor tracks and at headlands.

Practices that encourage healthy plant stands can also reduce the impact of the disease. And while extended crop rotations of four years or more do not eliminate the pathogen, some reduction of oospores can occur, and there are other rotational benefits that can help reduce other disease pressures.

“Once you get the disease, it will be there for a long period of time. A combination of these different management tools and strategies can help reduce the impact of the disease,” McLaren says.