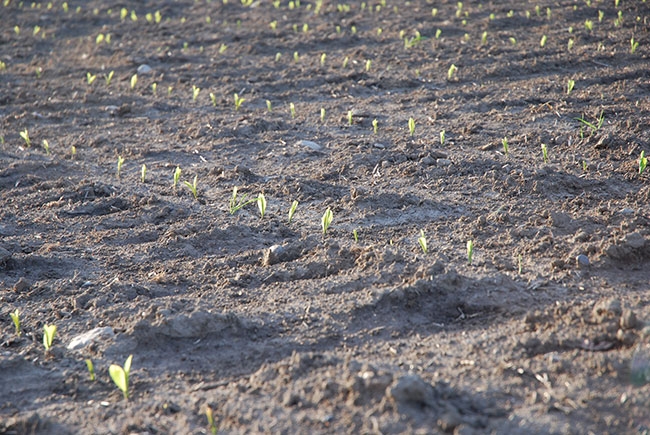 In northern corn growing areas typical of the Canadian Praries Corn is a heavy user of phosphorus (P) and is sensitive to zinc (Zn) deficiencies.

University of Manitoba M.Sc. graduate, Magda Rogalsky, looked at how sideband P and Zn fertilizer and tillage would impact corn growth parameters, maturity and yield as part of her graduate studies. Research was conducted in 2015 and 2016 at two separate sites each year near Carman and Portage la Prairie, Manitoba.

A crop rotation study looked at the effect of growing corn on either canola stubble or soybean stubble to see if the non-AMF canola stubble would impact yield, and whether P and Zn starter fertilizer could compensate. Four starter fertilizer treatments were compared to a non-fertilized P control and were side-banded in the spring two inches beside and one inch below the seed.

Fertilizer treatments: all treatments side-banded in the spring (2” beside and 1” below seed).

At two of three test sites, Zn levels were adequate; however, Stephenfield in 2015 had marginal levels.

Comparing AMF colonization at the V4 stage for corn, Rogalsky found no difference in the percentage of AMF colonizing roots between canola and soybean stubble treatments. However, growing corn after canola on the unfertilized control resulted in consistently lower early season biomass, lower plant tissue P concentrations and lower P and Zn uptake. She says this may indicate that the AMF activity levels were lower on canola stubble, earlier in the growing season.

The early season plant growth response and greater nutrient uptake with starter fertilizer further accelerated silking by two to seven days and reduced grain moisture at harvest. At two out of three sites, the corn matured more quickly, with a greater maturity response to starter fertilizer with corn grown on canola stubble.

The combined effect of positive early and mid-season responses appear to have helped the crop realize more of its yield potential by the end of the growing season, and the grain yield increased by 12.2 bushels per acre [770 kilograms per hectare (kg/ha)] with the application of the high rate of MAP fertilizer.

Starter fertilization that included Zn did not result in a corn grain yield increase when compared to the unfertilized control. However, there was no yield difference between the MAP and MicroEssentials SZ (MESZn) starter fertilizer treatments. Lack of response to Zn in the trial was most likely due to the study sites being predominantly located on soils that were not deficient in zinc.

“Contrary to our hypothesis, previous cropping of canola did not restrict arbuscular mycorrhizal fungi colonization of corn relative to that observed in corn after soybean,” Rogalsky says. “The negative influence of a preceding canola crop on early season growth and mid season development of corn can be managed with starter fertilization, to provide adequate P to the corn crop and maintain successful production.”

In northern corn growing areas typical of the Canadian Praries

Strip tillage equal to conventional tillage
Another part of the study compared starter fertilizer treatments under strip tillage and conventional tillage seeding systems. Under strip tillage, there is a concern that cooler early season temperatures may limit P uptake, which may lead to development of P deficiency symptoms at the early stages of development due to reduced root growth and P uptake.  Conversely, Rogalsky says that high levels of soil disturbance with conventional tillage can also harm AMF quantity and colonization, which may reduce early season P uptake. She looked at both tillage and starter fertilizer effects.

In 2015 and 2016, corn was seeded into cereal stubble (crop residue left on the field) at Carman and Portage La Prairie. In the previous fall, four fertilizer treatments and an unfertilized control were applied to both conventional and strip tillage treatments. Fall applications utilized a Yetter strip-till applicator to deep band (mono-ammonium phosphate; MAP) at four-to-five inches deep. Spring P applications of MAP were side-banded two inches beside and one inch below the seed.

“Averaged over all site-years, spring side banded P out-yielded the control and both fall deep banded P treatments,” Rogalsky says.

Rogalsky explains that strip till could provide economic savings with lower fuel and labour costs over conventional tillage where a fall and spring tillage is typically conducted prior to seeding corn.

“Strip till in combination with starter fertilizer, appears to be a viable conservation tillage alternative to conventional tillage in Manitoba, where cold and wet soils at planting are a risk to timely planting and vigorous early season growth,” he concludes.