Coming out of the 2013 crop year with almost 20 million acres of canola stubble, farmers are being advised to pay particular attention to their phosphorus (P) fertility plans for 2014. Very high canola yields removed a large amount of P from the soil, and mycorrhizal activity is delayed after canola.

“Canola is a big user of phosphorus, removing one pound per bushel of yield per acre. This year, with some pretty exceptional yields, we’ll be seeing 55 to 60 pounds of P2O5 removed per acre, and I’m pretty sure that the crop wasn’t fertilized for that kind of P removal,” says John Heard, soil fertility extension specialist with Manitoba Agriculture, Food and Rural Initiatives (MAFRI) at Carman, Man.

Wheat, on the other hand, removes about 0.60 pounds P2O5 per bushel per acre.

In addition to this large removal of P, canola is a non-host for mycorrhiza fungi, a beneficial organism that improves P uptake in host crops.

“After a canola crop there is a lag in time before the mycorrhizae re-establishes and becomes effective. This can impact P uptake of the following crop,” says Heard.

Arbuscular mycorrhizal fungi (AMF) have a mutually beneficial relationship with many plants, and these fungi co-exist on the plant root of host crops. The main benefit of mycorrhizae is their ability to provide greater uptake of P and other non-mobile nutrients such as zinc and copper. The hyphae (strands of the fungi) are smaller than plant root hairs and can access water and nutrients in soil aggregates that plant roots cannot. In return, the host crop provides carbohydrates to the fungi. Globally, the benefits of mycorrhizae have been well demonstrated, with several surveys of hundreds of field trials showing an average yield benefit of 23 to 37 per cent.

While the mycorrhizal fungi co-exist with 90 per cent of vascular plants, they do not co-exist with brassica species such as canola and mustard, nor sugar beets, lupines or buckwheat. In soils in which these crops are grown, or on summerfallow, the mycorrhizal fungi develop resting spores and wait for a host crop to be grown. There can be a delay of 50 to 60 days prior to recolonziation on a host crop.

Tillage can also destroy the mycorrhizal network and delay or reduce colonization on crops that are dependent on this symbiotic relationship.

Plan rotations with mycorrhizae in mind
For crops grown after canola, early season uptake of P may be lower than if a host crop has been grown the year before. For crops that are highly dependent on mycorrhizae, particular attention must be paid to P nutrition if grown after canola and other non-host plants or summerfallow.

Heard says growing cereals is likely the best option when seeding into canola or other non-host crop stubble, as cereals are not as dependent on mycorrhizae for early season P uptake. Still, starter phosphate fertilizer placed close to the seed is recommended for cereals, as the high level of P removal may mean lower P uptake early in the growing season. Conversely, he says corn and other non-host crops are usually successfully grown on soils with high soil test P levels or long-term manured land.

Growing mycorrhizae-dependent crops after non-hosts will mean paying particular attention to starter phosphate fertilizer application. For crops highly dependent on mycorrhizae for nutrient uptake, safe levels of starter P also should be applied with or close to the seed. Caution is advised, though, as many of these crops such as sunflower, flax and pea have low tolerance to seed-placed P, so side-banding P close to the seed may also be required for optimum P response. Corn is highly responsive to P and placing P in a band close to the seed can help overcome low P soils.

Soybean and flax also respond better to soil P than fertilizer P, so having those crops in a rotation following a mycorrhizal host crop such as cereals helps to ensure better P uptake than if they were seeded into non-host stubble.

Developing a long-term plan also is key for maintaining P soil fertility. “There is no black and white way to go about doing it. Some farmers try to match crop removal with P applications each year, while others take a rotational approach where if the crops grown over a four-year rotation removed 150 pounds of P, they will try to ensure 150 pounds of P2O5 are applied over those four years,” says Heard. “Crop rotations, equipment capability, fertilizer prices, land tenure and historic P applications all play a role in how farmers approach their long-term fertility plan.”

Heard says soil tests should be a key part of monitoring fertility levels. In addition to monitoring P levels, he says farmers should also pay attention to copper and zinc after non-host crops. Zinc is currently recommended for corn on soils testing less than 1.0 ppm Zn, 0.5 ppm for field bean and 0.25 ppm for cereals. For copper, the critical soil test level is 0.2 to 0.4 ppm on mineral soils.

In the long term, growing cereals on non-host mycorrhizal crop stubble is one of the best strategies for achieving optimum yield, as this approach allows high levels of seed-placed P fertilizer to compensate for the low activity of mycorrhizae early in the season, and also to help build up P levels to maintain P fertility at sufficiency levels. 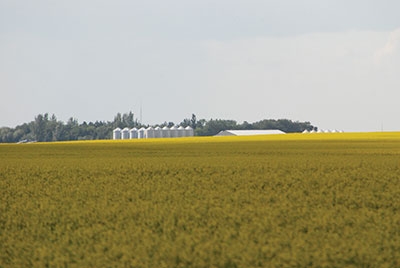 With canola as far as the eye can see Farmers are being advised to pay particular attention to their phosphorus fertility plans for 2014.