With integrated approaches and greater diversity, control is possible. 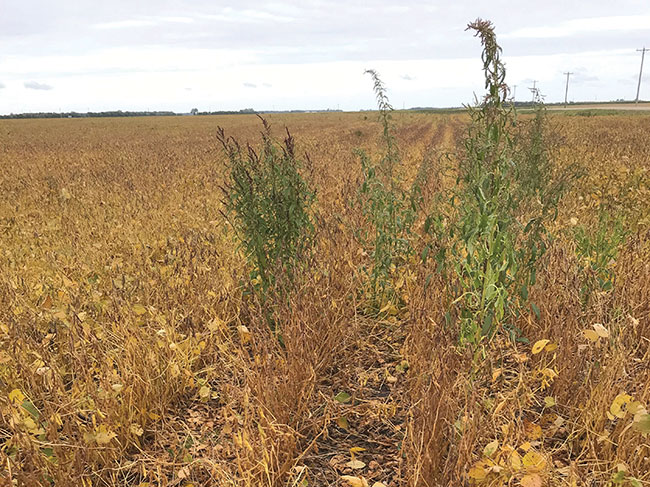 Waterhemp is proving a formidable weed threat for Ontario producers.

It’s a summer annual in the amaranth family that grows rapidly and produces a huge amount of seeds each year. These facts alone would make waterhemp a tough opponent, but it’s also evolved resistance to many herbicide groups.

“Pretty much every waterhemp plant that’s being detected is resistant to two or more modes of action,” says Mike Cowbrough, weed specialist for the Ontario Ministry of Agriculture, Food and Rural Affairs (OMAFRA). In fact, many counties have confirmed four-way-resistant waterhemp populations.

Peter Sikkema, a professor of weed management at the University of Guelph, Ridgetown Campus, says glyphosate-resistant (GR) waterhemp was first confirmed from seed collected in Ontario in 2014. Over the ensuing six growing seasons, GR waterhemp is now found in 14 counties over a distance of 700 kilometres.

Cowbrough says waterhemp plants were first found in the province in 2002, and even then, some populations were resistant to two herbicide groups.

Unlike other forms of pigweed, waterhemp does not self-pollinate, but requires cross-pollination between male and female plants to produce seed. Because of this, the plant is inherently able to rapidly spread genetic traits that are valuable for survival.

“What’s unique about waterhemp is that ultimately you select for resistant populations,” Cowbrough says. “It’s a plant that can make adaptive changes in response to its environment very quickly. Say it’s resistant to two groups, and you use a third group to kill it – that might work, but only for a couple of years. It boils down to a numbers game. There are lots of plants and lots of genetic traits, and there’s bound to be one that can survive.”

In Ontario, the crop most affected by multiple-herbicide-resistant waterhemp is soybean, followed by dry bean (although Cowbrough says that, as yet, there’s less waterhemp in counties that grow the latter). There are few control options for these crops, unless producers want to switch to newer herbicide traits such as the Extend system, potentially losing access to food-grade marketing opportunities and upping input costs.

But Cowbrough makes it clear that switching herbicides is a short-term solution. “By the time you figure out you have herbicide-resistant waterhemp, it’s probably too late to manage it. It requires you to be proactive. I think we’ve finally got to a stage where everyone can recognize that – we don’t have 2,4-D resistant waterhemp in Ontario yet, but it’s only a matter of time. That time horizon is less than we’d typically see in other weed species,” he says.

Cowbrough’s point: in the short term, producers are in a decent position, but in the long term, the problem of herbicide-resistant weeds can’t be overcome with more herbicides. 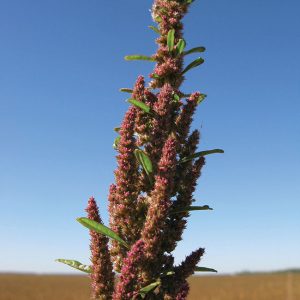 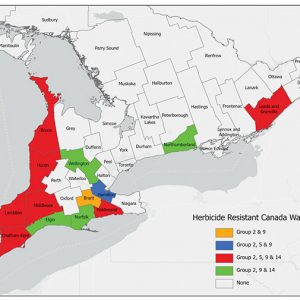 Graphic shows the spread of herbicide-resistant waterhemp in Ontario. Counties in red have Group 2, 5, 9 and 14 resistant populations. Image courtesy of OMAFRA/University of Guelph.

The goal of the experiment is to reduce the number of waterhemp seeds in the seedbank by 95 per cent, using methods every farmer can implement and requiring no special equipment.

The team is looking at two soybean row widths (of 15 and 30 inches), and seven effective modes of action over the three-year period of the most complex rotation.

No data is available yet, but Sikkema says that with the most complex weed management programs, the team is already getting greater than 95 per cent control of multiple-herbicide-
resistant waterhemp.

“I’m optimistic that we’ll see a dramatic depletion in the number of waterhemp seeds in the seedbank during the course of the study,” he says.

Essential to the management of difficult weeds is the introduction of greater diversity to cropping systems.

“I think herbicides will continue to be one component of a diversified, integrated weed management program,” he says. “However, I think that farmers should not rely exclusively on herbicides.”

Sikkema believes control of multiple-herbicide-resistant waterhemp is achievable by Ontario producers if they adopt an integrated weed management strategy. Most already have at minimum two-year rotations of corn-soy or soy-wheat, he says, and would not have to dramatically alter existing programs to implement the new system.

“I think what it really requires is that farmers proactively plan their crop/weed management programs three to five years into the future,” he says.

“Farmers can do it – I think they have to put a lot of planning into their long-term diversified crop and weed management programs, and if they do, I’m not saying these problems will go away, but I do think they will become more manageable.”

Resources
OMAFRA’s 2020 Guide to Weed Control (Publication 75) is a useful resource for Ontario producers. The publication includes management strategies for problem weeds and lists control options by crop type. The guide can be downloaded here:
www.omafra.gov.on.ca/english/crops/pub75/pub75A/pub75Atoc.htm.

Cowbrough has released a waterhemp biology and control update on the Field Crop News website, updated in 2020:
fieldcropnews.com/2020/07/waterhemp-biology-and-control/.