Adding diversity to rotations is a relatively low-cost strategy for reducing leaf disease development and improving productivity for silage producers. 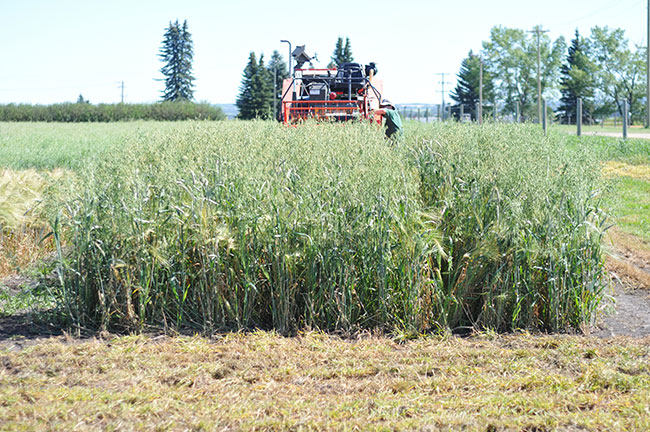 The intercropping treatment with spring triticale, with the variety components changing each year, Lacombe, 2010. Photos courtesy of T.K. Turkington.

Leaf disease development and yield losses are a serious concern for silage producers, including scald, net blotch and spot blotch. With a priority of increasing productivity without having to add a lot of inputs, researchers have been investigating potential low-cost, low-input options including rotational diversity to manage leaf disease development.

“We were trying to mimic as much as possible what a typical silage production system might be, which in the past has normally been barley, often with the same variety grown for a few years in a row on the same piece of land,” explains Kelly Turkington, plant pathologist with Agriculture and Agri-Food Canada (AAFC) in Lethbridge, Alta.

“As a consequence, there could be very significant development of leaf disease in that type of system. In some of our earlier research in the late 90s, we found that simply rotating barley varieties could result in a dramatic decrease in leaf disease and a corresponding increase in productivity compared to growing the same variety year after year. However, the best results were from including a non-host crop such as triticale in rotation, which significantly decreased leaf disease and increased yields. In 2008, we initiated a long-term study to investigate the impacts of adding diversity in rotations to leaf disease development in silage systems.”

The project was designed as a three-year rotational sequence repeated three times at two sites in Lacombe and Lethbridge. The project compared eight replicated treatments at each location in a three-year rotational sequence, including: continuous Sundre barley; barley rotation with different varieties; mixture of the same three barley varieties; mixture of three different barley varieties each year; an intercrop of same varieties and either spring or winter triticale; and an intercrop of different varieties and either spring or winter triticale.

Sundre, a six-row high yielding feed variety with an excellent scald resistance package was used in the continuous barley treatment and in the third year of the rotational sequence for all treatments. For the three-way variety mixture and intercropping treatments, each variety was seeded at 100 seeds per square metre (seeds/m2) and mixed together to end up with a target seeding rate of 300 seeds/m2. All of the trials were direct seeded in the spring using a ConservaPak Seeder or equivalent. To more easily facilitate leaf disease assessment in the three-way barley variety mixture, the treatments included a two-row, a six-row (Sundre) and a hooded or non-awned variety.

“With each different treatment, we tried to add more diversity into the system for comparison,” Turkington says. “For example, using a winter triticale in the intercrop creates an understory of triticale foliage along the soil surface to help intercept disease spores being released from old infested barley stubble on the soil surface. A non-host crop increases the distance between susceptible crop components, and also acts as a barrier to disease development. If a net blotch spore lands on a non-host oat or triticale leaf, the spore would die and not be able to contribute to disease development in the crop. Similarly, in barley variety mixtures, the genetics of one variety may potentially trigger a defense, while another may be more susceptible to virulent spores, overall reducing the disease load or rate of disease development.” 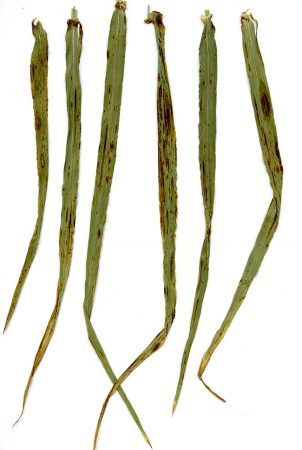 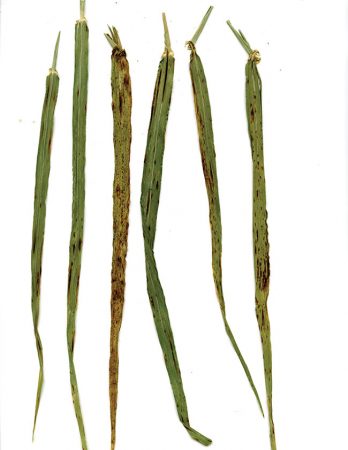 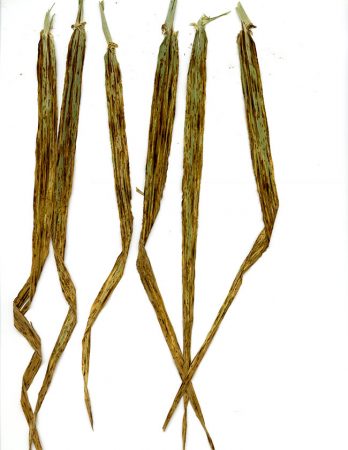 Over the nine years of the project, researchers conducted leaf disease rating assessments for net blotch and total leaf disease at the end of year three in each of the rotations, including 2010, 2013 and 2016. The assessment for leaf disease was conducted on Sundre barley in each treatment and rated for percent leaf area affected on the penultimate leaf, or the second leaf from the head. “Overall, we were trying to determine if we would be able to see a trend of reduced disease development as we added diversity,” Turkington explains. “The results confirm that as diversity increased, net blotch disease levels were reduced and crop productivity increased.

The highest levels of disease were measured in continuous barley, with disease assessments showing above 80 per cent of the leaf area affected. Simply by changing barley varieties each year in rotation, disease levels dropped to approximately 70 per cent and using barley mixtures dropped it to 60 per cent. Using different barley components in the mixtures brought disease levels down even further.”

Intercrops using the same varieties each year had significantly lower disease levels than continuous barley, but more disease than where the variety component was changed each year. There was also an indication of lower disease with winter triticale as compared to spring. Researchers suspect that the understory of the winter triticale leaf material may have helped intercept net blotch spores and spores of other barley pathogens. 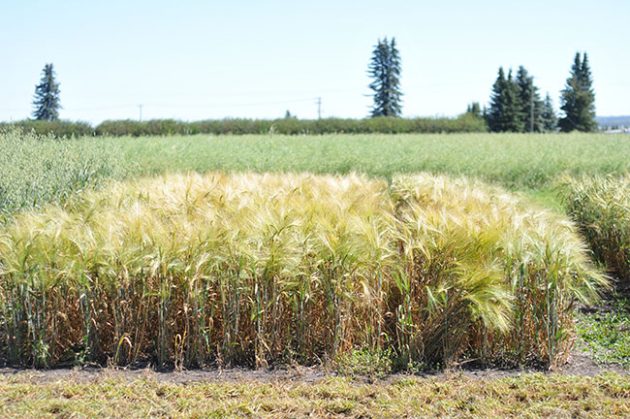 In comparison on a dry weight basis, the treatment with the highest tonnage was the intercrop of barley, oat and spring triticale. Spring triticale typically produces more biomass including crop head and grain at harvest, whereas the winter triticale does not when seeded at the spring timing. For the other treatments, there were very similar patterns for dry weight silage, with significant increases in productivity with barley variety rotation and barley mixtures compared to continuous barley. Overall the trends and results were similar between the Lacombe and Lethbridge sites, although disease levels were quite a bit lower at Lethbridge. As well, the barley variety mixture with different components tended to do among the best of the treatments at Lethbridge, although the intercrops also performed quite well.

“The results from our earlier work in the mid-’90s and this longer-term comparison study confirm that adding diversity in terms of an intercrop or barley mixtures can provide a relatively low cost strategy for reducing disease development and improving productivity,” Turkington says. “It’s a good reminder that even with the newest varieties and improved genetics with a great disease package, the challenge remains that if you grow that resistant variety continuously for two, three or four years, you are going to see a shift in the pathogen population to more virulent pathotypes.”

These same principles apply to swath grazing, which can also benefit from more diversity in rotation to reduce leaf disease development, and also to corn silage. Even with little or no history of corn production in a field, as the rotation is pushed in terms of repeating the same crop and potentially the same hybrid variety for a few years, growers can expect to see a shift in pathogens and an increase in disease development. “Adding diversity not only reduces leaf disease development and increases productivity over the long term, it also protects and extends the effectiveness of the disease resistance genetics packages included in the varieties,” Turkington adds. “Adding more diversity to rotations and selecting varieties with good resistance packages is a relatively low-cost, low-input strategy for reducing disease development and improving productivity that can be readily implemented in a continuous silage production system.”