According to Randy Kutcher, associate professor of cereal and flax pathology at the University of Saskatchewan (U of S), crown rust, which is essentially leaf rust, is the biggest issue with growing oats in Saskatchewan. “Although crown rust is not a problem every year, nor is it even that widespread, there are a lot of alternate hosts around for Puccinia coronata to complete its lifecycle, and this makes the disease a potential problem,” he notes. “Along the South Saskatchewan River valley and even around the university campus, the buckthorn shrub that serves as an alternate host is very prevalent. Leaf spot diseases, caused by the pathogens Pyrenophora avenae, Cochliobolus sativus and Septoria avenae, so far seem to be more of a problem for Manitoba growers.”

In a recent two-year research project led by Kutcher, oat disease surveys were conducted in Saskatchewan, along with field experiments at Saskatoon and Melfort. The objective of the research was to determine the effect of conventional fungicides and oat cultivars that vary in resistance to crown rust and leaf spot and to crown rust severity. Researchers also wanted to determine the effects on oat yield and quality.

“In the disease surveys, crown rust was the primary pathogen present at Saskatoon, and disease was severe in field plots and neighbouring fields,” Kutcher explains. “In 2012, natural levels of crown rust were high even in other trials and nearby breeder’s plots.

In areas along the South Saskatchewan River and in a radius of about 30 miles around Saskatoon, crown rust has been a problem for oat growers in recent years. “However, in 2014, once you got out of the city east towards Humboldt, for example, there was little crown rust,” he adds. “The growers along the river are at a higher risk, which is likely because of the prevalence of the alternate host and the fact the pathogen overwinters quite easily and spreads very early in the season.”

In disease surveys at Melfort, crown rust was not observed. Leaf spot severity was low in Saskatoon, but low to moderate in Melfort.

In the field trials at Saskatoon and Melfort in 2013 and 2014, the first experiment compared three oat varieties: AC Morgan (crown rust susceptible), CDC Dancer (intermediate) and CDC Morrison (resistant); and three fungicide treatments: check (unsprayed), propiconazole and pyraclostrobin (Headline). The plots at Saskatoon were inoculated with a mixture of crown rust races to ensure a high risk of infection, while plots at Melfort were not inoculated.

Leaf spot severity was low, but reduced by fungicide application at Melfort; little increase in yield or quality was detected. There was little difference between AC Morgan and CDC Morrison for leaf spot symptoms, but CDC Dancer appeared to suffer slightly more than the other varieties. There was no impact of fungicide on beta-glucan content at either location, although there were differences among varieties at both locations.

“In Saskatoon, we did see improved disease control with the use of fungicides because of the high level of crown rust,” Kutcher notes. “However, at Melfort, with little disease we didn’t see any benefit of spraying with a fungicide. These results are similar to what we saw several years ago in Melfort, where disease levels were rarely a concern.”

In terms of crop yield, both fungicides increased yield of AC Morgan compared with the unsprayed check. However, yields of CDC Dancer and CDC Morrison were not increased with the use of either fungicide.

“Many growers choose to grow AC Morgan, which is a standout variety in terms of yield if you don’t have any disease issues,” Kutcher says. “However, selecting a resistant variety like CDC Morrison may be a good strategy in areas where crown rust is a problem and growers don’t want to use a fungicide. CDC Morrison is not only resistant to crown rust, it also has at least 50 to 60 per cent higher beta glucan than AC Morgan or other popular varieties. In our tests, the beta glucan levels of AC Morgan were four to 4.5 per cent, while CDC Morrison was seven per cent or higher. Should a premium become available for beta glucan, growers may want to consider growing a variety like CDC Morrison regardless of disease issues.”

A second experiment was conducted to determine the effect of the product Actigard on disease severity, oat yield and quality. The product has no direct activity against target pathogens, but induces systemic acquired resistance (SAR) in the plant.

Actigard was applied at two rates, 8.75 g ai/ha and 26.25 g ai/ha, and at three crop growth stages: seedling, boot and heading, on varieties CDC Dancer and CDC Morrison, with an unsprayed check for each variety. The results of four site years of trials didn’t show any effect on crown rust or leaf spot disease severity or any other of the factors measured. There were no positive or negative effects from using the product.

“We are planning to repeat the fungicide by variety trials again in 2015 at both Saskatoon and Melfort, which will provide us with six site years of data,” Kutcher says. “The results so far are consistent. So for growers using a susceptible variety, they should probably apply a fungicide as soon as they see crown rust.

“However, by growing a resistant variety, you probably don’t have to spray at all. So far, CDC Morrison, a resistant variety, is standing up very well to crown rust. In a year with no disease, this variety may yield up to 10 per cent less, however if you have crown rust, then yields can double without having to apply a fungicide,” he adds.

Another related U of S project was funded at the end of 2014 and is focusing on leaf spot disease in oat. Led by Aaron Beattie and Tajinder Grewal, researchers will be collecting isolates of Pyrenophora avenae, Cochliobolus sativus and Septoria avenae, and screening germplasm to try to breed for oat resistance to leaf spots.

“Although it’s not a big problem yet in Saskatchewan, we expect it to be more of an issue in the future,” Kutcher says. “Watch for more information from both of these projects over the next couple of years.” 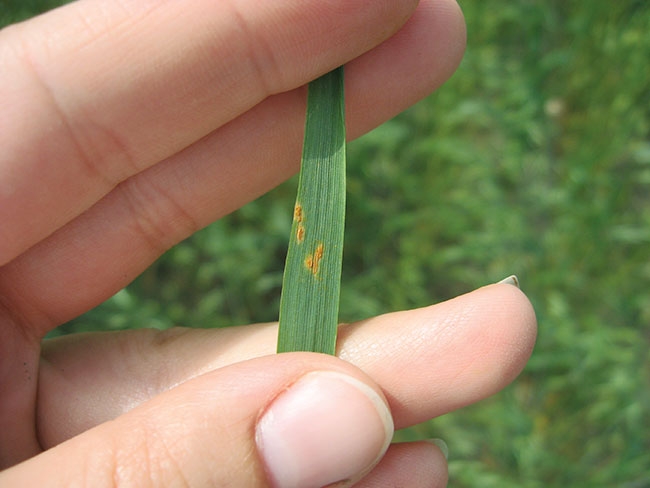