Growers will soon have access to a new weed management tool for field pea and other crops. Pyroxasulfone is a new molecule that provides broad-spectrum control of many grass and broadleaf weeds when soil-applied pre-plant or pre-emergence. This new mode of action is a Group 15 herbicide, with activity on some of the common resistant weed biotypes in Canada such as wild oat and cleavers, both Group 2-resistant weeds.

Pyroxasulfone is a soil-applied herbicide and as a result can be affected by organic matter levels, soil moisture and other soil factors. Pyroxasulfone is a relatively unique mode of action in the Canadian Prairies, “which could really help our growers with weed control and in particular herbicide resistant weeds in peas,” Tidemann notes.

One study was initiated in the fall of 2011 at five sites in Alberta and Saskatchewan with a wide range of soil types and organic matter levels. The objectives of the study were to evaluate the potential of pyroxasulfone to control acetolactate synthase (ALS) inhibitor-resistant weeds in field pea, and determine the effect of soil organic matter content on the efficacy of pyroxasulfone on cleavers and wild oat or on the tolerance of field pea. Researchers also compared the efficacy of fall and spring application to determine which application timing provided the greatest weed control and least crop injury.

In the study, pyroxasulfone was applied in split-plot trials at five locations including Scott, Kernen and Melfort, Sask., and Ellerslie and Kinsella, Alta., ranging in soil organic matter (OM) content from 2.9 to 10.6 per cent. Fall and PRE spring applications were made at each site comparing rates of 0, 50, 100, 150, 200, 300 and 400 g ai/ha of pyroxasulfone and an application of Viper as an industry standard.

“The study did not find any consistent differences in timing; both fall and spring applications were effective,” Tidemann says. “However, both weed efficacy of pyroxasulfone and pea crop tolerance were affected by trial location, particularly the soil organic matter content and soil moisture. With wild oat, efficacy started at lower rates, but results were variable, with around 80 per cent control achieved at the average top level. Cleavers could be controlled 100 per cent, with rates depending on location and organic matter.”

At Kernen and Scott, significant yield reductions and pea injury occurred at 150 and 100 g ai/ha and higher. However, this was a result of these sites receiving about 200 per cent of their normal moisture. Low organic matter and high precipitation levels at these locations caused higher than normal herbicide activity under these conditions, and injury is not expected under more normal growing conditions. No injury has been observed in other sites or trials with this product. Overall, the research showed that pyroxasulfone may allow control of ALS inhibitor-resistant false cleavers and wild oat. However, locations with high soil organic matter (>~seven per cent) will require higher rates than those with low organic matter for similar control levels.

“The results showed that the efficacy of pyroxasulfone and sulfentrazone combinations was additive under both field and greenhouse conditions,” Tidemann says. “With different weed spectrums, a co-application of these two products can broaden the spectrum of weeds controlled in field pea. Again, higher OM content generally required higher rates of herbicide to achieve similar efficacy for all tested species.”

Pyroxasulfone and sulfentrazone can be combined to aid in herbicide resistance management and broaden the weed spectrum compared with each product used alone, although rate selection may be OM dependent. Use of these herbicides adds infrequently used modes of action to crop rotations and can aid in proactive or reactive management of herbicide-resistant weeds. However, integrated weed management and responsible use of these herbicides is necessary to maintain their effectiveness in Western Canada.

Registration for field pea and other crops by 2016
Pyroxasulfone was registered in Canada for use in field corn and soybeans in 2014, and other crops including field peas are expected to be added to the list fairly soon.

“The registered product for corn and soybeans is available as Focus herbicide, which is a co-pack of Pyroxasulfone 85 WG and Aim EC, a Group 14 product,” Mitch Long, product development manager with FMC of Canada in Saskatoon, Sask. explains. “Focus, which can be applied pre-plant or pre-emergence alone or in a tank mix with glyphosate, provides grassy and broadleaf weed activity. Focus and glyphosate can be applied prior to planting or within three days of planting to control any emerged weeds and to set up the crop for residual control with pyroxasulfone.”

The product is applied to the soil surface and does require one-half inch of moisture to move the product into the soil for control. It does have activity on some of the common resistant weed biotypes in Canada, such as wild oats and cleavers, Group 2 resistance and for Group 9 glyphosate resistance.

FMC conducted large-scale field trials in Canada in 2014 on corn and soybeans, with positive results. “For growers, the real advantage is the setup treatment with the burnoff and the residual activity of pyroxasulfone, which provides a weed-free environment for germination and establishment of corn or soybeans,” Long notes. “Depending on the rate used, the residual control can last up to eight weeks or longer, and then an in-crop herbicide application can be made if needed. The fact that the pyroxasulfone can be applied with a burnoff treatment in the spring saves labour and provides early weed control. If spring rains delay in-crop application, there is already some weed control in place.”

FMC has also applied for registration of pyroxasulfone products in spring and winter wheat and lentils, which are expected to be approved for the 2016 growing season. Durum wheat will not be included. “We are submitting the product for registration in field peas, flax and chickpeas, and expect approval for the 2017 growing season,” Long says. “This product will be a pre-formulated mix of Pyroxasulfone 85 WG and Authority. This new mode of action Group 14 and 15 herbicide brings to growers a new set of weed management tools for crop management.” 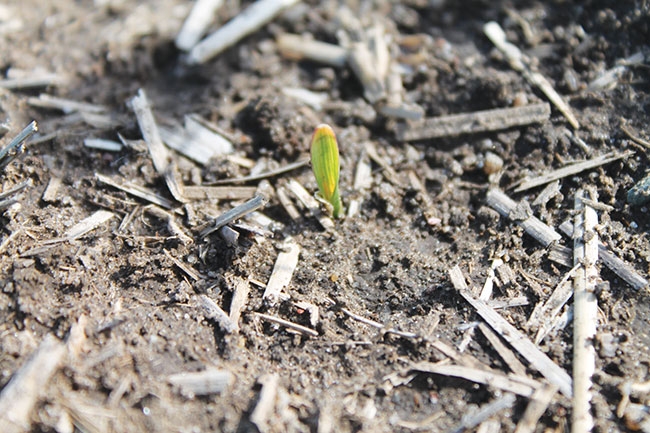 Pyroxasulfone symptoms on wild oat at Scott Growers will soon have access to a new weed management tool for field pea and other crops.