Using herbicides as one tool in the weed management toolbox is the way forward. 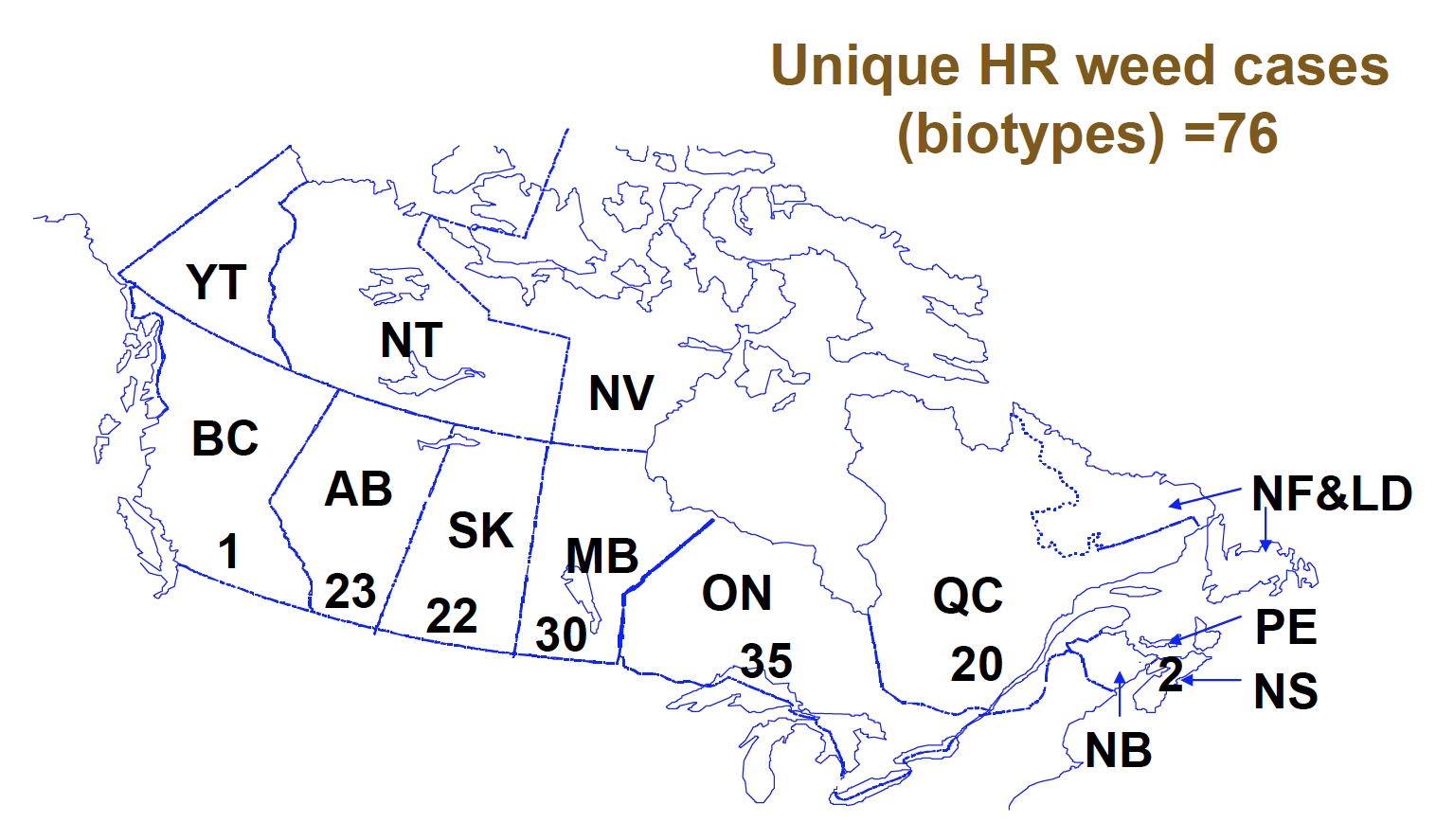 Herbicide-resistant weeds have been a problem in Canada for years, and the problem continues to escalate. As of 2018, there were 76 unique weed biotypes across Canada with herbicide resistance (HR), according to Hugh Beckie, a former Agriculture and Agri-Food Canada scientist at Saskatoon and current professor at the University of Western Australia. A number of experts anticipate this number will continue to climb. In Ontario alone, there are 35 unique HR weeds.

Adam Pfeffer, corn and soybean agronomic systems manager with Bayer Crop Science, has some advice for those dealing with three of the most difficult weeds. One part of the problem, Pfeffer says, is growers often rely heavily on one mode of action to work, increasing the likelihood of resistance development.

“Another aspect of the whole herbicide industry is it’s very difficult to develop and launch a new mode of action,” Pfeffer says. He notes there have been no new novel modes of action developed in almost 30 years.

Bayer Crop Science announced a new novel mode of action in the pipeline earlier this year. However, even if the chemistry makes it through the rigours of the regulatory process, Pfeffer cautions any new products are still more than a decade away from commercial availability.

“We need to start thinking about [alternative methods of control] as these populations become more challenging to manage with the use of herbicides alone,” he says, referencing integrated weed management, crop rotation and cover crops. For instance, one of the best tools for weed management in corn and soybeans is row width. With soybeans planted in 7.5- or 15-inch rows, the window of weed control is drastically shortened, but soybeans planted in 30-inch rows still may not be canopied late in the season, extending the weed control window.

On the topic of glyphosate resistance specifically, Pfeffer highlights the importance of tank-mixing rather than applying it alone in delaying additional resistance development and improving efficacy. In 2014, 26 per cent of farmers in Eastern Canada used glyphosate as part of a tank mix. That number rose to 36 per cent in 2018.

“No chemistry is immune to developing herbicide resistance,” Pfeffer says. “Once you’re at that moderate to high-level resistance, depending on the weed species, its ability to develop in the seed bank and the longevity, you’re really in for a career-long challenge to deal with that weed,” he adds.

Kochia: A weed on the rise

Kochia was first identified in Alberta in 2012 during a provincial weed survey, and was found in Saskatchewan and Manitoba in 2013. Between the 2012 and 2017 surveys in Alberta, herbicide resistance levels increased drastically, including populations with multiple resistances.

In discussing chemical control of kochia, efficacy is important, but cost is also always a factor in tank-mixing.

“Obviously the question around cost comes up in any of these conversations, when we start talking about tank-mixing partners,” Pfeffer says. “Certainly, economics is a big driver in the decisions that we make as farmers, but when we’re dealing with challenging weeds like [kochia], I think we have to reset our expectations around what the economics look like.”

Pfeffer says farmers need to move past focusing on the short-term economics in favour of long-term sustainability to be successful at preventing further herbicide resistance.

“The challenge with [Canada fleabane] is, you can do everything right in your own fields during the growing season, and if you have a neighbour or a farmer 10 miles away that has an infestation, that weed seed can blow – certainly in the fall at harvest time – around and set up shop in quite a few other fields,” Pfeffer says. “It’s what I call a ‘community weed’ ­– you really need a community-based approach to managing it.”

Pfeffer thinks Canada fleabane is a weed that won’t ever be fully eradicated and seed spread will be challenging to manage year in and year out. He isn’t too worried about Canada fleabane control in corn, as tillage can help provide effective control, but with soybeans and cereals it’s a much bigger issue.

Waterhemp: “The weed that unites us all”

The newest herbicide-resistant weed to cause problems in Canada is glyphosate-resistant (GR) waterhemp, which worries Pfeffer quite a bit. Southern Ontario currently has diverse populations of the weed that have spread quickly, some of which exhibit four-way resistance. These four-way-resistant populations are likely caused by seed brought up from the U.S. on equipment or by migrating birds, since there hasn’t been sufficient herbicide use and time to create those resistances in Canada. Manitoba and Quebec have also identified GR waterhemp populations. 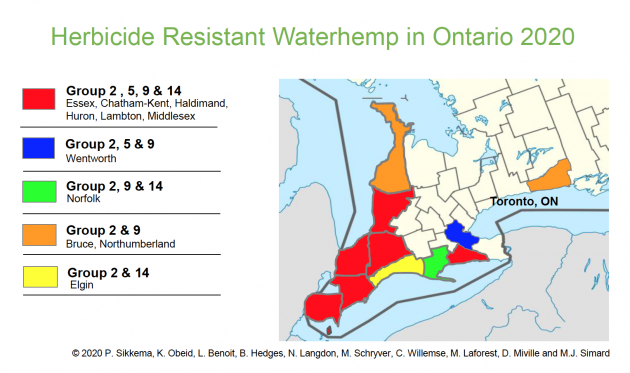 One of the major issues with waterhemp is that it can germinate all season long. It begins emerging after burndown or last cultivation and continues to emerge throughout the entire growing season.

As for the next herbicide-resistant weed that Canadian growers will face, Pfeffer already has a likely candidate.

“The next one on the doorstep – in Michigan and North Dakota, and a few other geographies – is Palmer amaranth,” he says. “I wouldn’t be surprised if it’s somewhere in Canada already and we just haven’t identified it.”

Palmer amaranth causes significant issues in some areas of the U.S., particularly in the south, and its speedy growth makes it a serious pest. There are also reports from the U.S. of waterhemp and Palmer amaranth with resistance to six or seven different modes of action.

Pfeffer cites a few resources for farmers looking for information on herbicide-resistant weeds. ManageResistanceNow.ca, developed by CropLife Canada, provides a wealth of information on herbicide, pesticide and fungicide resistances. Mike Cowbrough, weed management specialist with the Ontario Ministry of Agriculture, Food and Rural Affairs (OMAFRA), has compiled data and maps on herbicide resistance testing over the years in a mapping system resource.

Although it is currently still in development, a collaborative effort between OMAFRA, Agriculture and Agri-Food Canada (AAFC) and the University of Guelph has Pfeffer particularly excited. The goal is to provide quick resistance testing using genetic markers, which would provide in-season identification of weeds, allowing for quicker action. The Mix It Up platform developed by Bayer Crop Science is another good resource that farmers can access.

While herbicide resistance doesn’t drive our management decisions yet, it one day will, according to Pfeffer. “Canada is still a ‘yields first’ market,” he says.

It’s important to start shifting our culture of “pushing the easy button” and putting in the work to embrace integrated weed management strategies now in order to still have herbicides available as an option in the future.