Herbicide resistant weeds are continuing to increase in number of species and area across Canada. Glyphosate resistant weeds (Group 9) are increasing their spread, as many growers rely on glyphosate for weed control in Roundup Ready soybean, corn and canola crops, and as a pre-seed or pre-harvest burndown.

In 2008, giant ragweed (Ambrosia trifida) was the first glyphosate-resistant weed confirmed in Ontario, followed by Canada fleabane (Conyza Canadensis) in 2010, common ragweed (Ambrosia artemisiifolia) in 2011 and most recently, waterhemp (Amaranthus tuberculatus) in 2014.  In Western Canada, glyphosate-resistant kochia (Kochia scoparia) was first confirmed in 2012. In the U.S., there are 14 species resistant to glyphosate and 31 species worldwide. The complexity of the problem in Ontario is exacerbated by the fact there are biotypes of all four species that have multiple resistance to both the Group 2 and Group 9 herbicides.

“Farmers have told us by their purchasing decisions that they like the Roundup Ready technology and the corresponding use of glyphosate for weed control,” Sikkema says. “In 2014 in Ontario, 96 per cent of corn and 76 per cent of soybeans were seeded to Roundup Ready hybrids/cultivars. Therefore, it is incumbent on all of us to use this technology properly so that future farmers continue to realize those benefits.”

One of the most important strategies for managing the problem is to have a diversified crop rotation, which would help reduce the reliance on glyphosate. “Try to add a non-Roundup Ready crop to your rotation, and consider adding crops like spring cereals, winter wheat, dry bean, forages or vegetable crops,” Sikkema says. “In those crops, glyphosate is obviously not used for in-crop weed control, although it might be used for a burndown. Also, consider including crops with alternative herbicide resistant traits such as Liberty Link, and in the near future, Enlist or Roundup Ready Xtend.”

Within every crop in the rotation, consider using more than one mode of action on every acre every year. This will protect that technology for a longer period of time. If you are growing corn or soybean, using a two-pass weed control program is the best way to manage weeds in those crops. Sikkema explains a two-pass weed control system means applying a soil-applied residual herbicide in the spring, followed by a post-emergent in-crop herbicide.

“Our data shows there are very good reasons to do this and the benefits are two-fold. In addition to reducing the selection intensity for glyphosate-resistant weeds, our research shows it also maximizes yield. The weed control and the net returns from a two-pass system are equivalent to a glyphosate only program,” he says.

Although not applicable to every farm operation, another thing farmers should consider, especially in Ontario, is including tillage at strategic points in their crop rotation. This is especially applicable to those species that are winter annuals or ones that emerge really early in the spring.

“One of the biggest problem glyphosate-resistant weeds in Ontario is Canada fleabane, which produces lots of seed – up to one million seeds per plant – that moves by wind and has an extended emergence pattern,” Sikkema says. “A timely tillage operation early in the spring is one practice that can help control emerged Canada fleabane. In contrast, for other glyphosate-resistant weeds like common ragweed or waterhemp, no matter how much tillage you do, it won’t help because they emerge after the last tillage operation is complete.”

Excellent crop management is important to improve the competitiveness of the crop and help reduce the selection pressure for herbicide resistance. Sikkema recommends seeding early in narrow rows and at high populations to improve crop competitiveness. “Seeding at the optimal seeding date and rate, [seeding] in narrow rows, using a balanced proper fertility program, and timely insect and disease control helps the crop outcompete weeds,” he says. “Increased crop competition makes it more difficult for weeds to emerge and complete their life cycle.”

There are several integrated weed management strategies farmers can use, and each individual farmer will have to tailor practices to their operation and determine which components will fit into their overall farming strategy. Farmers in other jurisdictions like Western Canada can learn from these Ontario lessons.

“Implementing good stewardship practices, including weed management practices that limit the selection of additional glyphosate-resistant weeds, will help ensure the usefulness of glyphosate and Roundup Ready crops for many years in the future,” Sikkema says. “The goal for all of us should be to protect and manage these technologies, and reduce the selection of herbicide-resistant weeds so these technologies continue to be of benefit to future farmers.” 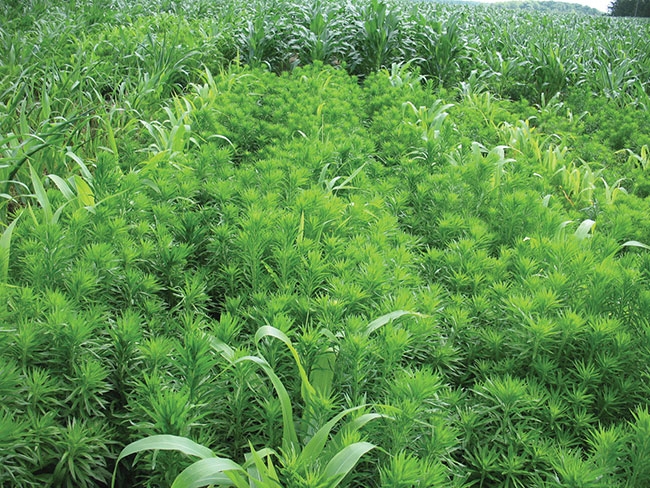 Glyphosate-resistant Canada fleabane in corn. Herbicide resistant weeds are continuing to increase in number of species and area across Canada.
Print this page