September 3, 2015
By Agriculture and Agri-Food Canada

Innovations in research and development (R&D) are giving farmers new options for managing crop residues left over after harvest. One such state-of-the-art option is being led by the Composites Innovation Centre (CIC), which, with support from Agriculture and Agri-Food Canada, has developed a way to turn crop residues into profitable game changers for Canadian farmers looking for new markets.

Based in Winnipeg, the CIC develops and transfers composite-related technologies to the manufacturing industry by building R&D product demonstrators. Sean McKay, the CIC's president and CEO, says that since its inception in 2003, the Centre has focused on supporting the commercialization of agricultural biomass for industrial applications.

Because of Canada's abundance of flax and hemp crop residues, which are stronger and stiffer than the residues of other crops, the CIC has focused on using these materials in composite panels. These natural fibres can replace conventional fibreglass as reinforcements and be moulded into tractor hoods, vehicle fenders and bus doors. The CIC is already using biomass for composite panels in small quantities and anticipates that full-scale commercialization is about two years away.

To date, the Centre has produced a full-scale electric-vehicle body and several vehicle fender and tractor hood panels using composite materials. Buhler Industries, a Winnipeg-based farm equipment manufacturer, has mounted composite parts on tractors and deployed them for in-field trials in Canada and the U.S. As well, the CIC has combined flax shive – the woody core of the plant's stem – with a bioplastic (a resin produced from corn crop residues) to produce the hub cap of a three-wheeled commercial vehicle.

The CIC has also invested significantly in developing a new technology focused on understanding the properties of natural fibres, in order to provide the automotive, ground-transportation and aerospace industries with the assurance that these fibres meet a specific quality standard for use in those industries' products. The new technology grades the fibres using a series of measurement techniques that monitor the chemical, physical and strength properties of crops such as flax, hemp, wheat straw and canola. The plan for the future is for this technology to be used by farmers in their fields to monitor the properties of their crops as they grow, so that the farmers can identify markets and other profitable opportunities for materials that were once only considered residues.

To find out more about the work being done by the Composites Innovation Centre, visit www.compositesinnovation.ca.


September 3, 2015By Agriculture and Agri-Food Canada 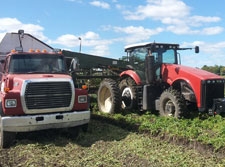 Innovations in research and development (R&D) are giving farmers new options for managing crop residues left over after harvest.
Print this page