Too many blanket statements is not a good thing.

The registration of Folicur for 2006 is being hailed as a management strength,
not just because it makes it more readily available, but that it finally has
hurdled the 'emergency registration' label it wore for years.

But among other things, Folicur's registration has spawned a series of requests,
by ministry extension personnel and agronomists, to add to the body of research
on it. In one instance, growers are being asked to test half rates of fungicides,
including Tilt, Headline and others, in an effort to determine the efficacy
and cost efficiency compared to yield.

Luc Bourgeois, a researcher with Bayer CropScience, acknowledges there are
studies dating back two years where half rates of Headline, followed by Folicur
have shown up to five bushel per acre yield increases. But he confides that
growers must keep in mind the conditions on their particular farms. Yield potential,
soil types, precipitation over a set period of time, as well as weed control
and disease pressures play such a large role in determining the success of any
management strategy.

"We're aware that the rate we have right now for Folicur is the rate to
control fusarium. We are looking at lower rates to control specific leaf diseases,"
says Bourgeois, adding he tries to stay away from blanket statements. "If
you have no disease, there's no point in putting on a fungicide, or if you have
a poor crop, you're not going to get that five bushel advantage. Fungicide works
best in high yielding crops."

Recommendations aimed at reducing the frequency of sprayer applications are
also in the works for Bourgeois, including work with Tilt and Stratego and applications
with Buctril M. "That's certainly an opportunity: if there is some powdery
mildews or septoria, early in the season when you do your herbicide application,
you now can put that fungicide with it which could save you some application
costs," he says. As for tying that application to corresponding success
in the field, again, it depends on the timing; of the herbicide or the fungicide,
combined with other agronomic or weather influences during a growing season.
As for leaf disease fungicide applications, "I still strongly believe that
the most important application is the late application, because the flag leaf
is the leaf you want to protect, it's really what builds the yield." 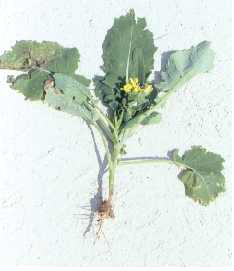 Folicur's impact on DON
Asked whether Folicur can help lower DON (deoxynivalenol) levels and raise the
marketability of wheat varieties, Mark Etienne, a cereal breeder with Hyland
Seeds, concedes that for all Folicur can do, it cannot rescue weaker varieties
enough to meet the two parts per million (2.0ppm) DON level restrictions in
Ontario. "A variety that's susceptible to fusarium head blight with a high
disease load won't be helped by Folicur," explains Etienne. "It's
just an added security bonus for those good varieties."

Like Bourgeois, he expresses the importance of understanding the risk posed
by fusarium and co-ordinating that with a Folicur application. Etienne is also
interested in the longer-term affect Folicur has on different varieties, and
any potential impact that has on marketing the stronger ones versus the weaker.