Canola-snow-canola is not a crop rotation, but it’s a practice that’s becoming more common.

With the profitability of canola compared to other crops, particularly in the higher moisture regions of the Prairies, tighter rotations have become the norm. The official recommendation remains canola once in every four years, but lots of producers now seed canola every second year. And with increasing frequency, canola is being seeded directly into canola stubble.

Some of the producers seeding canola after canola claim that there’s little or no yield penalty or disease buildup. That’s not what the research indicates.

In the southern Prairies, lentil profitability has occasionally convinced producers to grow lentils on lentil stubble. This is also considered an agronomic no-no, but profitability sometimes rules the day.

Yantai Gan, a research scientist with Agriculture and Agri-Food Canada at Swift Current, reviewed the results of various crop rotation studies when he addressed Pulse Days in Saskatoon back in January.

Why rotation is valuable
It’s widely known and understood that rotating between cereal, oilseed and pulse crops helps prevent disease buildup and improves weed control options. Plus, having pulses in a rotation decreases the need for nitrogen fertilizer.

Beyond these benefits are some not as obvious. One of these is rooting depth. Wheat, mustard and canola can draw moisture from deep in the soil profile. Peas and lentils, on the other hand, draw very little moisture from below 60 centimetres. Rotating between shallow rooted and deep rooted crops can improve water use efficiency, which can be particularly important in the Brown and Dark Brown soil zones.

Beyond that, peas and lentils have thicker roots than wheat. Yantai Gan postulates that pulse crop roots may be performing a micro-tillage function by leaving large soil pores after decomposition.

As well, pulse roots have a lower carbon to nitrogen ratio, meaning they leave behind more nutrients. The nitrogen-fixing nodules on pulse crop roots number in the millions per acre.

As well, research at Swift Current shows that hydrogen gas is released during nodulation and the resulting H2 oxidizers stimulate plant growth. Gan says these are new findings, never reported before.

Wheat-lentil rotation
A wheat-lentil rotation has been studied at Swift Current since 1985. The more than 25 years of data show that wheat after lentil produced a four percent higher wheat yield than growing wheat continuously. There were also cost savings.

After 25 years, the lentils did not show any yield decline, which indicates that a one-year break between lentil crops may be adequate. Significant soil quality improvements were noted as compared to continuous wheat.

The 20- and 40-kilogram-per-hectare rates of starter N did not produce significantly higher yields for continuous peas, but there was a slight improvement noted on pea yields when the crop rotation included wheat.

The conclusion is that intensification of pea rotations is possible with a one-year wheat break. Weed control, the researchers say, remains the biggest issue in this sort of rotation, posing a bigger issue than disease.

Canola rotation study
From 1999 to 2007 there were canola rotation trials at Melfort and Scott. Continuous canola was compared to canola every second, third and fourth year. Two very different varieties of canola were used. One was open pollinated, non-herbicide tolerant and blackleg susceptible. The other represented more modern production – hybrid, herbicide tolerant and blackleg resistant.

The lowest yield by a significant margin for both varieties of canola was with continuous canola. Blackleg-resistant canola averaged about 21 bu/ac over the 14 site years while blackleg-susceptible canola averaged only about 13 bu/ac when grown continuously. Yields improved to about 29 and 17 bu/ac, respectively, when canola was rotated with wheat.

On a blackleg rating scale of 0 to 5, the blackleg-susceptible variety rated a 2 in a continuous canola rotation. As the rotation lengthened, the disease decreased, falling to a rating of 1 in the wheat, pea, wheat, canola rotation.

The same trend was noted in the blackleg-resistant variety, although disease severity was much less. In continuous canola, the rating was 0.5. That dropped to about 0.1 in the longest rotation.

The researchers conclude that shortening canola rotations will nurse fungi in the field, even with resistant varieties. In addition to rotating crops, they say the disease control strategy should include rotating the resistance genes being employed and rotating between fungicides with different modes of action. 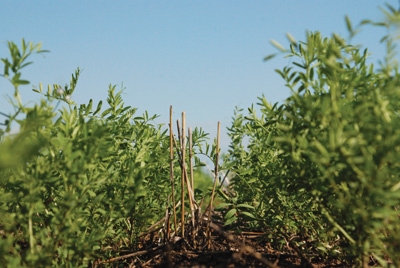 Lentil yielded best on wheat stubble in a long-term study at Swift Current. Canola-snow-canola is not a crop rotation