Management strategies
The Canola Council of Canada is proposing a risk assessment chart. If you have a four-year rotation, likely your risk of having blackleg is very low. We know it’s effective, but I realize it isn’t always easy to implement. [Miss part one? Click here]

Scouting is important because it gives you a sense of your risk situation. There is an easy procedure that can be used to assess risk. After swathing, pull 50 plants, cut the stems at the base of the plant where blackleg develops and assess the damage to the stem. Use the pictorial guide I developed to assess the level of disease. If you don’t have any disease or very light disease, your variety might still be holding fairly well as long as you continue with longer crop rotation. But if you have an R-rated variety with a much higher disease level than you expected, your variety may not be holding up.

If you do want to switch varieties, try to rotate to another major resistance gene. We currently don’t have enough public information from seed companies to know what their resistance sources are. The Canola Council of Canada has proposed a new resistance labelling system to show the resistance gene labelling. It is voluntary and may start in 2018. 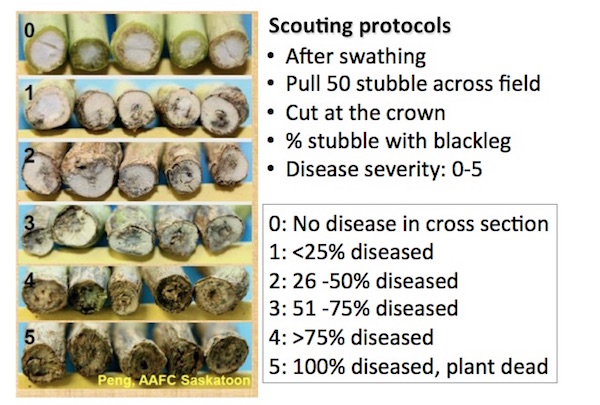 If you don’t have any issues or major blackleg damage, there’s no urgency for you to switch between resistance groups right away, but it’s always a good practice to rotate them if you know the R genes. We understand 90 per cent of growers would rotate among the different varieties today mostly for weed management options. There is a similar principle in rotating varieties for disease management.

I want to also stress that we have quite a diverse pathogen population on the Prairies. In reality, over 90 races have been detected. That means with every known resistance gene, there is a different virulent isolate out there that would be able to overcome the resistance right away. We really need to consider, if we have different R genes available, rotation of those R genes. And we also need to maintain the non-race-specific resistance, which has been serving us relatively well.

What about fungicides?
Research on various fungicide products and application timings has been conducted. One involved 17 station years across the Prairies. We used four fungicide products, mostly the strobilurins and a triazole, and a combination of both active ingredients. We looked at applications at the two- to four-leaf stage, the bolting stage, and an application at both stages.  We also compared a susceptible variety with a resistant and a moderately resistant variety.

When we put all the data from 17 station years together, the early application of a strobilurin fungicide reduced the disease severity and also increased yield quite significantly compared to the non-treated check. The average disease severity was around about 1.5. The later application did not work, which makes sense because the key stage of infection is the cotyledon.

However, these results were on Westar – a susceptible variety that was used to show the worst case when an R/MR variety is losing resistance. We looked at R/MR canola varieties at the 17 site years and found none of the fungicide applications were effective in providing a yield advantage (also indicating that the R/MR varieties have stronger tolerance to blackleg impact). That means if you have a certain level of resistance in your variety, in most cases the fungicide application would not provide a substantial yield benefit.

Where a fungicide treatment might come in is if the varieties you have been using are starting to show signs of an increased amount of blackleg. You should scout crops and assess the level of disease development over time. Also consider the length of the crop rotation and other risk factors outlined by the Canola Council of Canada. If you feel you are at high risk, an early application at the two- to four-leaf stage may be warranted. 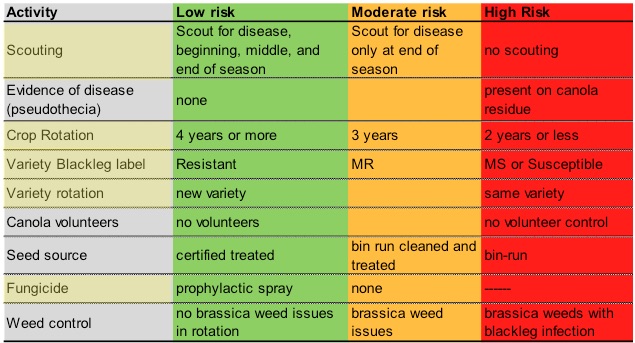 This article is a summary of the presentation “Managing blackleg of canola in Western Canada,” delivered by Dr. Gary Peng, Agriculture and Agri-Food Canada, Saskatoon, at the Field Crop Disease Summit, Feb. 21-22, 2017. Click here to download the full presentation.