Blackleg is caused by two species of the pathogen. The major one is called Leptosphaeria maculans. The other one is a much less virulent species called Leptosphaeria biglobosa. For control of the disease, pathologists look at some of the weak links where we can apply most of the impact on the disease. The pathogen only survives on residues. If you don’t have a residue, it doesn’t survive well in the soil. That’s why rotation is important.

The pathogen produces a fruiting body in the spring called a pseudothecium or another type called a pycnidium. They produce spores that land on the cotyledons of canola. If you have insect damage from pests like flea beetles, the infection can be worse. With wounding, the pathogen can get into the cotyledon tissue even without moisture. From there the infection develops and you see the cankers at the base of the stem later on in the growing season. 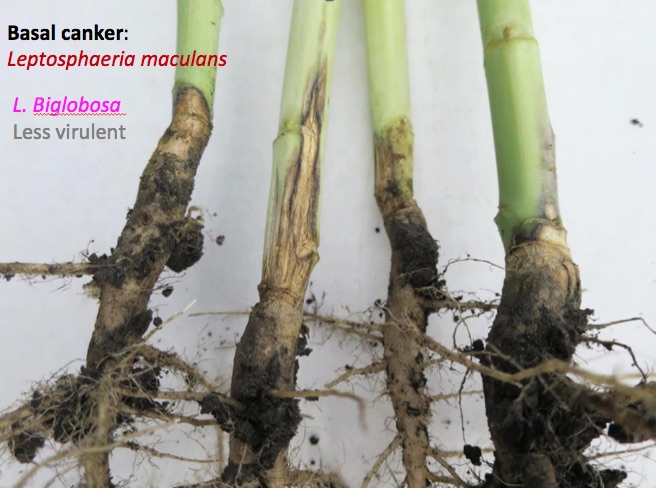 There are three important things that can lead to an infection:
·      there’s residue to harbour the pathogen inoculum
·      you need to have early infection to get into the stem
·      insect damage may help the infection to occur more severely.

The disease was very prevalent in the late ’80s, early ’90s. Then we introduced some resistant varieties in the early ’90s, which brought down the occurrence for many years. Partially that was resistance bred into varieties, but we also had three- or four-year rotations. That was a big part of the whole management effectiveness.

In the last five to six years, the disease incidence has been creeping back up to 20 to 25 per cent in Alberta and Manitoba, and about 10 per cent in Saskatchewan. However, the average severity remained below level 1 (light). Research by Sheau-Fang Hwang in Alberta indicates that in most years, this level of severity could result in a yield loss of about two to eight per cent on a susceptible variety. But from a trade perspective, our trading partners want to see the disease level trend going down.

My colleague, Randy Kutcher, looked at the change in pathogen populations in 2007 when he looked at the avirulent gene prevalence on the Prairies. In his work looking at 800 isolates of L. maculans, the percentage of Av2 and Av6 genes were very high in the population, and the others at more moderate to low levels. Further work in 2010 and 2011 with Dilantha Fernando at the University of Manitoba found the picture had changed quite a bit. The presence of the Av3 and Av9 genes had decreased quite a bit, but at the same time Av7 seemed to be increasing quite a bit. That means the Rlm3 gene would be less likely to be effective across the Prairies because the Av3 gene had changed mostly to the virulent type. The Rlm3 gene was first introduced back in early 1990s and has been used for over 20 years.

Other research in Fernando’s lab also looked at what resistant genes are present in 206 varieties/breeding lines in Western Canada. The resistance gene that was predominantly found was Rlm3 in around 70 per cent of the varieties/breeding lines. There was also a bit of Rlm1 detected as well. Overall, the diversity of R genes is still quite limited in the germplasm tested. The important message is that Rlm3 is not going to remain effective on the Prairies because the corresponding Av3 gene is already fairly low in the pathogen population.

However, when we looked at field data in Alberta and Manitoba, while the occurrence of other Av genes was high, disease levels ranged widely. This told us there was something else going on, which we called non-specific resistance in our varieties, although the effect was definitely less than the major gene resistance.

We further investigated this non-specific resistance in our varieties. We tested commercial varieties with a pathogen without a corresponding Av gene so any resistance observed would be due to non-specific gene resistance. Almost all the varieties had a slightly smaller amount of the disease on inoculated cotyledons than the susceptible Westar. At the same time, it’s a totally different kind of resistance reaction as opposed to the major gene resistance. It would not stop the infection completely – it just slowed it down a little bit, and on some varieties, substantially.

A further look at three of those varieties found the progress of plant mortality originated from cotyledon or petiole inoculation was somehow reduced, but varied between the varieties. Using a fluorescent protein gene labeled isolate, photography was able to show the reduced spread of the pathogen in the cotyledon compared to the susceptible Westar variety.

If you can slow down the movement from the cotyledon via the petiole into the stem, there may not be enough of the pathogen getting into the stem before the cotyledons drop off. This is one of the reasons that non-race-specific resistance works in some of those varieties we have. 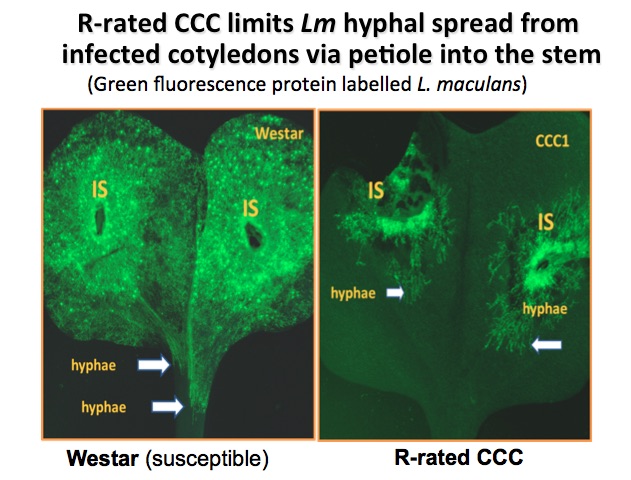 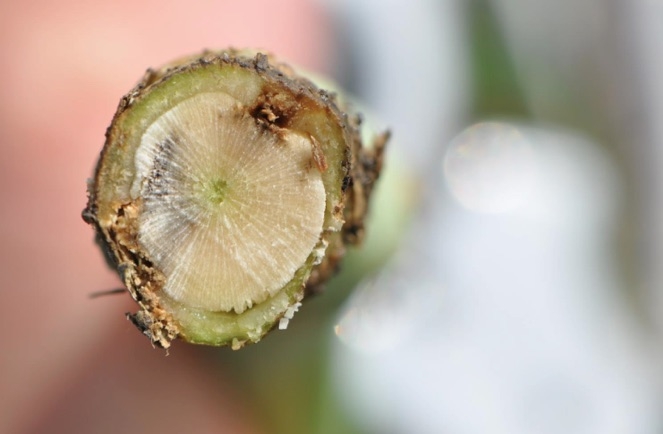 Blackleg is caused by two species of the pathogen.