Developing innovative ways to use smartphones for in-field soil and crop testing. 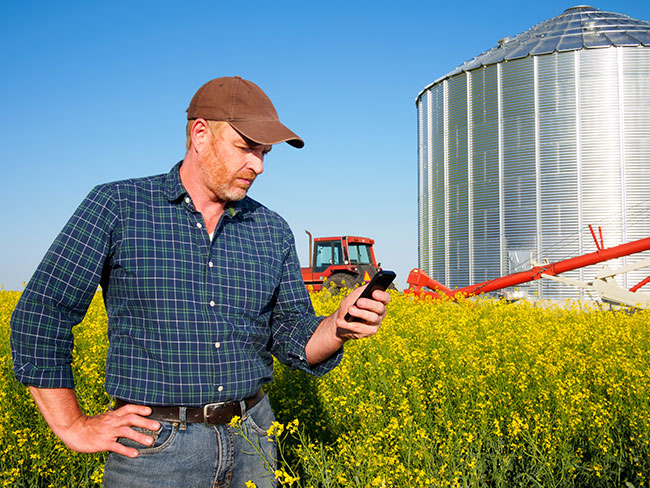 On-the-spot, inexpensive, easy-to-use soil and crop analysis tools could help crop growers to enhance management of their fields. Having such tools in a really convenient hand-held device would be even better. That’s why researchers like Qingshan Wei and Asim Biswas are developing smartphone-based approaches to crop and soil testing.

Fast, accurate disease diagnosis
Wei’s research focuses on developing field-deployable molecular imaging, sensing and diagnostic tools for plants and people. One of his research group’s current projects is to develop a smartphone platform for cost-effective, rapid diagnosis of crop diseases.

“We like this technology because we are using existing consumer digital devices. Nowadays almost everyone has a smartphone. That will reduce your sensor cost because you already have some components in your pocket. We just supply you with the additional parts, and you can assemble them together to create a more scientific measurement tool,” says Wei, an assistant professor in the department of chemical and biomolecular engineering at North Carolina State University.

“The second thing that is really appealing about smartphones is their wireless connectivity. In the future, I think we can expand the connectivity of agriculture data; you could have water sensors, temperature sensors, and other sensors that you could monitor remotely. A smartphone could be part of that sensor network.”

Wei notes that an in-field tool for accurate disease diagnosis could be really helpful, especially when different diseases or strains have similar-looking symptoms. If growers are trying to control a fast-spreading, potentially devastating disease, getting an immediate diagnosis would make a huge difference compared to waiting for days to have the samples analyzed in a lab.

The smartphone-based diagnosis system that Wei’s group is developing involves analyzing a plant’s emission of volatile organic compounds (VOCs). All plants emit VOCs; however, the composition of those emissions changes when the plant has a disease, and each pathogen species produces a distinctive VOC profile.

For their initial research to prove that this concept could work, Wei and his group have been using late blight in tomato as the model disease. Late blight is a very damaging disease caused by Phytophthora infestans, a fungus-like organism called an oomycete. Their studies so far show that their sensor system provides greater than 95 per cent accuracy in differentiating between Phytophthora infestans and other pathogens that cause similar symptoms on tomato leaves.

Their innovative sensor system consists of two parts. One part is a sensor strip. “This is a paper-based, one-time use, disposable strip,” Wei says. “The strip includes an array of different sensor elements, including some organic dyes and nanoparticles. Each sensor element on the array is responsive to a different type of volatile molecule emitted by the plants.” The strips are customized to respond to the particular VOCs released by the pathogen of interest – in this case, Phytophthora infestans.

The other part of their system is a sensor strip reader. “We are developing a 3D-printed reader that you can attach to any smartphone model. This attachment also increases some optical components, allowing the cell phone to capture a high-quality image of the sensor strip,” he explains.

“The sensing mechanism is very simple. After exposure to the VOC emissions, the colour of the sensing element will change. So essentially we are using the cell phone camera to monitor the colour change.”

The sensor system is easy to use. Let’s say you see some suspicious symptoms on a plant while scouting in your crop. “You just detach a leaf from the plant and put it into an enclosed container. Many parts of the plant can emit VOCs; our application targets the leaves because that is the most convenient plant tissue we can access,” he says.

“The container could be a plastic or glass bottle or tube, or even a Ziploc plastic bag. You put the leaf in the container for a few minutes to let the VOC concentration increase a little.”

Then you open the container and insert a small hose that is attached to the reader. The reader contains a little pump that pulls the plant’s emissions from the container into a chamber in the reader that has the sensor strip. The system then analyzes the colour pattern on the strip and determines the concentration of the pathogen that you are testing for.

“We did a few pilot studies to evaluate the sensor system’s performance in a lab setting and some initial tests in the greenhouse,” Wei notes. “We are currently working with a collaborator here on the university’s campus and with some extension workers to test the sensor under real field conditions, with different weather conditions and so on. We want to make sure it can produce similar results in the field as in the lab. After that, we will probably try to find more partners, maybe first within North Carolina, and then maybe across the United States, so we can do more tests.”

The researchers have recently submitted a patent application for the sensor system. Wei is hopeful that they will be able to translate this innovation into a commercial product within a few years.

Along with being quick and accurate, the sensor system is designed to be really affordable. He says, “The smartphone attachment is relatively simple and very low cost. We are using a 3D printer in the lab to generate a few prototype devices, and we added some off-the-shelf optical components. But the overall cost for the whole reader is only about a few tens of dollars, and I believe that cost could be further reduced if you scale up the manufacturing. The sensor strips cost only a few cents per strip.”

For their next steps, Wei and his group want to develop this technology to detect Phytophthora infestans in other hosts and to detect other Phytophthora pathogens.

Phytophthora infestans infects various plant species in the same family as tomatoes, such as potatoes and peppers. “We haven’t done side-by-side comparisons, but we believe that different plant hosts may have slightly different VOC backgrounds,” he says. “But the good thing is the sensors pick up the two different types of signals. One is the baseline VOCs from the plant, and in our current sensor strip, we also have specific sensing elements selective to late blight.” So, perhaps only a few modifications to the existing late blight strip will be necessary to reflect the different host species.

He also notes, “At present, we are demonstrating that we can differentiate different types of pathogen species, but our plans include investigating whether we can go one step further and identify different strains of a pathogen. For instance, the strain types of late blight vary every year, and in some years a fungicide-resistant strain will dominate.” Timely information on the late blight strain would allow a grower to make a more informed decision about fungicide options.

Further into the future, Wei and his group hope to adapt this sensing system to identify many other kinds of plant pathogens, such as fungi, bacteria and viruses. 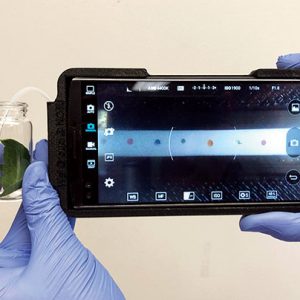 Wei and his group are developing a smartphone-based system that diagnoses crop disease by analyzing the volatile emissions from a plant. Photo courtesy of Qingshan Wei, NCSU. 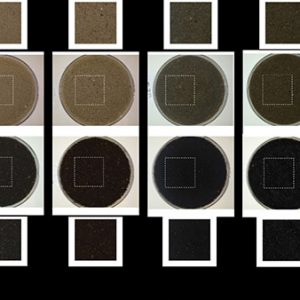 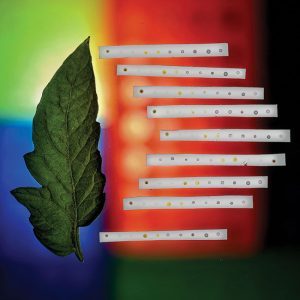 Quick, convenient soil analysis
“Back when I was a soil science student, I spent most of my time standing in the lab doing soil analysis. I had wondered if there could be some faster alternative,” says Biswas, an associate professor at the University of Guelph’s school of environmental sciences.

This desire for alternatives to time-consuming, labour-intensive soil testing methods wasn’t just wishful thinking. It was the spark that ignited Biswas’s current research program on sustainable soil management strategies using sensor-based soil information – as well as his interest in developing in-field, low-cost soil analysis methods that anyone could use.

“The target is to bring the science to your fingertips,” he says.

One of his research group’s current projects is a smartphone app to assess soil organic matter (SOM) content. This app is based on the fact that SOM content influences soil colour.

To use the app, you would stop at various locations in a field, clear away the crop residue at each location, and take a photo of the soil surface with a smartphone. Biswas adds, “If you cannot completely clean the residue off the soil surface, this program will identify the presence of non-soil material in the image, like crop residues that might be reflecting light, and it will take out that non-soil part and analyze only the soil.”

The app analyzes the soil image in terms of its colour characteristics – its hue (wavelength), intensity (brightness), and grey value (lightness or darkness) – and uses those characteristics to estimate the soil’s organic matter content.

In the first phase of developing this app, Biswas and his research group addressed the fact that a soil’s colour can also be influenced by its moisture content. They conducted studies to quantify the effect of soil moisture on the relationship between SOM content and soil colour, and they developed a way to estimate SOM content under different soil moisture levels.

According to Biswas, this method will determine the SOM content with about 95 per cent or greater accuracy. “Plus, you’ll have the results at about one-hundredth of the cost and in a much shorter time compared to measuring soil organic matter in a lab.”

Biswas and his group have made good progress on the soil science aspect of this method. Their next steps will focus on making the app easy to use, so Biswas is looking for a graduate student interested in tackling that aspect. “One of the upcoming challenges is to find easy ways to deal with changing conditions in the field – it could be a cloudy day versus a sunny day, or you could be taking the image a little closer versus a little farther away, or you could take the image with one smartphone model versus another,” he explains.

Biswas and his group are also pursuing several other ideas for smartphone-based soil analysis. For example, they are exploring if soil colour is correlated with other important soil properties. As well, they have worked out how to use soil images to determine the size and shape of soil aggregates and to calculate soil porosity. Biswas is interested in the possibility of using a smartphone camera attachment that can capture higher resolution images so imagery analysis could identify sand, silt and clay particles, and thereby determine soil texture.

His research group is also working on in-field soil phosphorus measurement, as phosphorus management is so important in both crop production and water quality. Biswas would like to develop a low-cost kit that would include a smartphone app and an inexpensive phosphorus sensor mounted on the end of a soil probe. You would push the probe into the soil at different locations in your field and read the phosphorus measurement on your smartphone.

Biswas says, “In the long term, instead of sending soil samples to a lab, you could have an easy-to-use kit with various sensors – for soil texture, soil organic matter, pH, soil nutrients like nitrogen, phosphorus, potassium – with the whole package purchased for perhaps $100 or $150. You would be able to get 10 times more data right in the field for very little cost. And that data could be used for variable management, helping you to improve soil management for better crop production and water quality protection. That’s my dream!”