Features Agronomy Diseases
Making the most of mycorrhizal inoculation

Could these inoculants be an effective way to improve a cereal crop’s nitrogen-use efficiency? 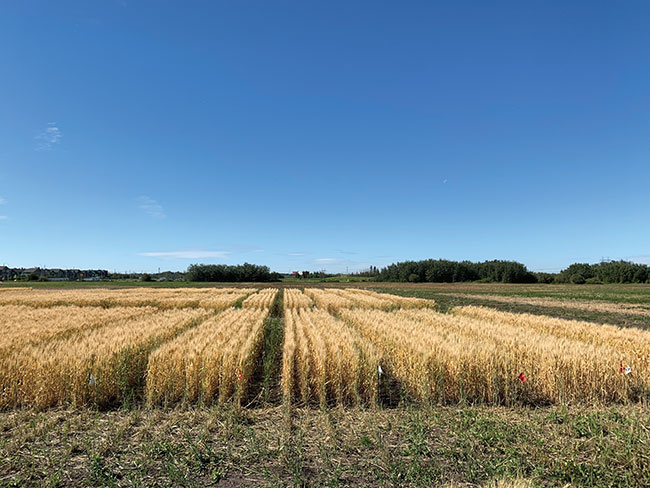 At the Ellerslie site, the trials are evaluating the mycorrhizal inoculant’s performance in relatively low-nutrient conditions. All photos courtesy of Kris Guenette, University of Alberta.

Many studies have shown that arbuscular mycorrhizal fungi (AMF) have the potential to improve crop productivity in a range of ways, from increasing the crop’s nutrient and water uptake, to improving its tolerance of disease and stress. Although communities of mycorrhizal species occur naturally in the soil, commercial AMF inoculants can sometimes boost crop benefits.

So, when does it make sense to apply an AMF inoculant?

To help answer that question, an Alberta project is examining how to optimize mycorrhizal inoculation, with a focus on nitrogen uptake in wheat and barley.

Using field and greenhouse trials, this research aims to shed light on the use of AMF inoculation in different cereal varieties and different soil and crop management situations.

“With nitrogen fertilizer prices increasing so quickly, it’s a good time to be doing this research,” says Guillermo Hernandez-Ramirez, an associate professor at the University of Alberta who is leading the project. “It gives us the opportunity to improve efficiencies in accessing soil nitrogen and fertilizer nitrogen by enhancing the efficiencies of these biological inputs.”

“This project has the potential to give producers another tool in their toolbox to enhance crop productivity in a sustainable manner,” notes Kris Guenette, the PhD student in Hernandez-Ramirez’s research group who is conducting the project. “It could advance the ability of our agricultural system to strategically reduce synthetic fertilizer applications while maintaining or even increasing crop yields.”

Hernandez-Ramirez adds, “Moving into the future, supply chains and markets will, more and more, ask the question: Has this food been produced in a sustainable way, in a way that is efficient and considers environmental factors? Our research is a way to contribute to the overall sustainability of Canadian agriculture, while helping our agricultural exports continue to grow.”

AMF basics
“There are many different native species of mycorrhizal fungi in different areas of the world. They are obligate symbiotes, meaning that they can exist in the soil but they really can’t do much without a plant host to colonize,” Guenette explains.

The symbiotic relationship starts when the spores of a mycorrhizal fungus come into contact with the roots of a compatible plant host. The fungus colonizes the root, develops inside it and forms hyphae, which are like the fungus’s arms. The hyphae grow into the surrounding soil to seek nutrients and water for the plant.

The hyphae are much longer and thinner than plant roots, so they can extend far beyond the roots and reach places the roots can’t access. “The hyphae can explore a much greater area of the soil and come into contact with nutrients in the soil solution and soil colloids much more frequently, and sometimes more efficiently, than plant roots can,” he says.

“This large quantity of fungal biomass, or hyphae, is really an external exploration structure. I call it the ‘nutrient highway’ of the fungi because this is where the nutrient uptake occurs and travels and then goes into the plant.”

In return for receiving nutrients such as nitrogen and phosphorus from its mycorrhizae, the host plant gives the fungi about five to 20 per cent of its fixed carbon.

Various factors influence the nutrient levels that an AMF provides to its host. Guenette says, “In the best-case scenarios, these fungi are able to provide up to 90 per cent of the phosphorus requirement and up to 20 per cent of the nitrogen requirement for their host plants.” 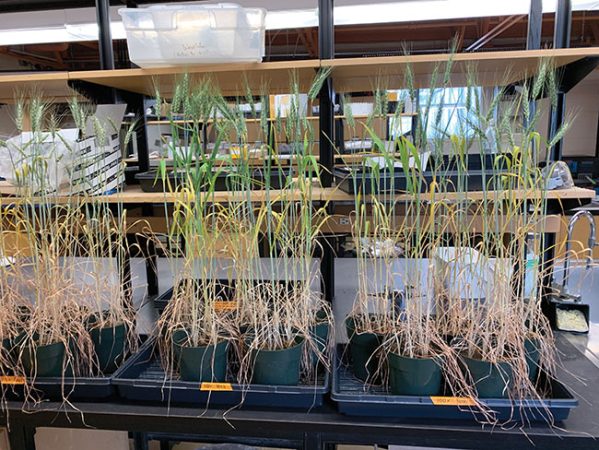 When might an inoculant be needed?
“Although there are naturally occurring mycorrhizae within the soil, there are instances where either the current management practices or soil conditions aren’t very conducive to having a large and/or diverse AMF community,” Guenette explains.

For instance, AMF numbers may be lower in marginally
productive soils or soils that have been recently reclaimed after industrial activity. The AMF community may also be impacted by practices like excessive tillage, excessive use of synthetic fertilizers, a fallow year, or growing canola – one of the few crops that does not form a symbiotic relationship with AMF.

Hernandez-Ramirez adds, “Not all crops interact in the same way with mycorrhizae, and not all mycorrhizae are created equal, fitting the same habitats and playing the same roles. Applying an inoculant is also part of looking for a match [between the host and the mycorrhizal species]. The mycorrhizae need to be able to colonize and build the association with the crop host and efficiently perform beneficial functions.”

Diverse sites
The field trials in this three-year project are looking at how site conditions, cropping systems, cereal varieties, inoculant rates, and fertilizer and fungicide practices affect the efficiency and effectiveness of an AMF inoculant. The trials take place in the cereal year of the crop rotation.

The project’s four sites are all in the Edmonton area, which has nutrient-rich, highly productive Black Chernozem soils. Each site provides a different angle to the research.

The Ellerslie, Nisku and Beaumont sites have replicated, small-plot trials, which started in 2020.

The Ellerslie site receives no synthetic fertilizers and has a fallow-cereal rotation. This site allows the researchers to examine AMF inoculant performance in relatively low-nutrient conditions. Guenette notes that research around the world generally shows AMF efficacy tends to be lower in very nutrient-rich soils than in soils that are not as nutrient-rich.

The Nisku site has a conventionally managed crop production system, with crops grown every year. The site has canola in the year preceding the trial so the researchers are looking at whether the AMF inoculant might be particularly helpful after canola.

The Beaumont site has an “anthroposol,” a soil impacted by industrial activity, which has been reclaimed. The soil’s top 10 to 15 centimetres are composed of mixed soil materials. This site is providing information about the inoculant’s performance in a soil that likely has low levels of natural mycorrhizae. No crops had been grown on the reclaimed soil before the trial.

The fourth site has an on-farm trial, which started in 2021. The site is located near Fort Saskatchewan on Guenette’s family farm. Although this is not a replicated trial like the small-plot trials, it does have multiple treatments. Each of the plots are the width of one air seeder pass. This trial allows the researchers to look at AMF performance in a field-scale situation. 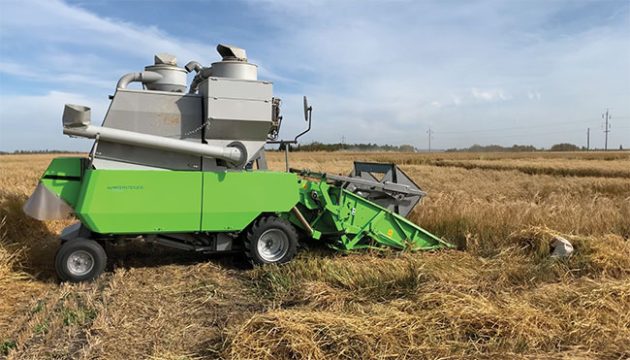 A plot combine collects yield data in the Nisku trial, which is looking at whether the inoculant might be particularly helpful in the year after canola.

“In a previous study about nitrogen fertilizer formulations, Kris found that AAC Brandon and AAC Penhold differ from each other in terms of nitrogen-use efficiency,” Hernandez-Ramirez notes. Now the researchers want to find out if these and other wheat varieties also differ in their response to the AMF inoculant.

“The inoculant we are using in the field trials is a commercially available product called AGTIV Field Crops. It contains just one mycorrhizal species, which is Glomus intraradices or Rhizophagus intraradices, depending on which classification you go by,” Guenette says.

“Glomus intraradices has been shown to be very good at creating fast symbiosis with plants. It is also a very hardy species in that it can better withstand some different environmental conditions as well as a little tillage. Also, it is able to colonize lots of different plant species and form a symbiotic relationship with those plants.”

The inoculant is applied in a granular form with the seed. The plots are comparing the manufacturer’s recommended rate of 5.6 kilograms per hectare (the 1X rate) and a 3X rate.

The fertilizer rates at each site are tailored to result in 50 to 60 per cent of the recommended amounts of available nitrogen and phosphorus. Guenette explains, “We want to see if we can apply near-recommended rates and still achieve yield improvements [from inoculation], or if we have to scale back even more to see yield benefits.”

For nitrogen fertilizer, the team is applying urea and basing the rates on the soil nitrogen test recommendations. In 2020 and 2021, they aimed for 60 kilograms of available nitrogen per hectare (kg N/ha). In 2022, they will compare two levels of nitrogen availability: 60 kg N/ha, and 85 kg N/ha.

They are also comparing two foliar fungicides, propiconazole (Group 3) and picoxystrobin (Group 11), each applied at a 2X rate.

The field data collection spans a long list of parameters, including: grain yield, protein and moisture; soil nitrogen content; macronutrient and micronutrient concentrations in the plant tissues to see how the different treatments affect the uptake of many different nutrients, not just nitrogen; photochemical yield, which relates to plant photosynthesis; and NDVI (normalized difference vegetation index), which is loosely related to plant health and nitrogen use.

In addition, the team is doing leaf disease ratings to see how the inoculant and the fungicides affect disease levels. They are also collecting data on things like mycorrhizal colonization of the roots, and identifying the mycorrhizal species within the roots to see if the roots are colonized by the species in the inoculant or indigenous AMF species. 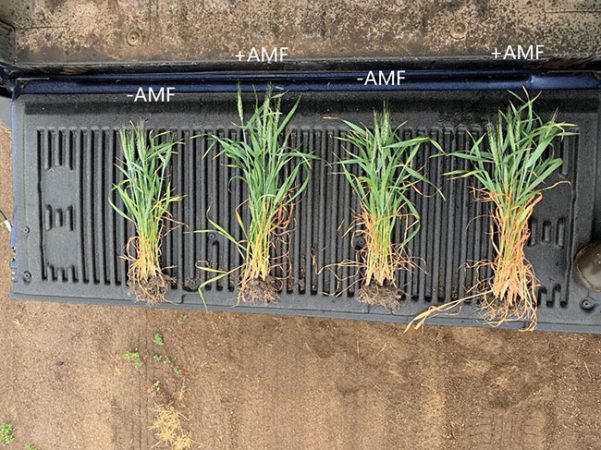 Examples of the effects of the mycorrhizal inoculant in the on-farm trial at Fort
Saskatchewan.

Greenhouse experiments
The main focus of the project’s greenhouse experiments is to compare the efficacy of two different AMF inoculants in Canadian spring wheat. One is AGTIV Field Crops (Glomus intraradices). The other inoculant contains a mix of four species: Glomus
intraradices, Glomus mosseae, Glomus aggregatum, and Glomus etunicatum. Although this multi-species inoculant is not registered for cereal crops, the researchers want to see if it might offer some advantages since it is more like a natural AMF community, where multiple AMF species typically occur together in the soil.

The greenhouse experiments are also assessing the impacts of different inoculation rates and different rates of urea and liquid UAN.

Initial highlights and take-homes
Although the project has one more field season to go, Guenette outlines some of the project’s preliminary findings.

“We’re also seeing differences in how each wheat variety interacts with the mycorrhizae. The symbiosis is also impacted via the fungicide application, and each fungicide has different impacts on that.

“And overall, in higher nutrient situations, we’re seeing some reduced efficacy of mycorrhizal inoculation, which is consistent with results from other AMF research.”

Once all the results are analyzed, Guenette and Hernandez-Ramirez would like to develop a suite of practices that optimize mycorrhizal inoculation. With information about which wheat varieties, input practices and field situations are most likely to result in the greatest benefits from inoculation, growers will be able to make better decisions on using this tool.

“First, mycorrhizal inoculation can be used to enhance cereal productivity, but there are specific conditions where that occurs. It is not continuous, across the board, all the time,” he says. “That is really what we are trying to suss out in this project – which specific conditions are able to utilize the symbiosis and optimize nutrient uptake in cereals. Second, the efficacy of mycorrhizal inoculation with Glomus intraradices depends on the existing soil nitrogen and phosphorus content. As you move from a nutrient-sufficient concentration toward nutrient excess, there tends to be reduced efficacy of inoculation,” he notes.

“And third, the wheat variety or class influences the AMF efficacy and the benefits that result from that.”


Related
Is inoculation necessary on long-term pulse land?
New Mycorrhizal fungi could improve canola production
Talking plants
Do you need to inoculate your soybeans every year?