It can work, but it’s not always optimum.

For some farmers, surface application is driven by the need for operational efficiency when applying fertilizers. Surface application is much faster than, for example, running 200 pounds of granular product through an air drill at seeding. But that is balanced with potentially reduced fertilizer use efficiency when placed in a less than ideal location.

“A good rule of thumb for fertilizer management is to ‘get it in the ground’,” says Jeff Schoenau, soil scientist at the University of Saskatchewan’s College of Agriculture and Bioresources.

Schoenau says there are many reasons why fertilizer on the soil surface isn’t a good idea.  Gaseous ammonia losses of nitrogen (N), especially from urea (46-0-0), happens rapidly, and contributes to greenhouse gases, not to mention lost N that could otherwise be used by the crop. Surface water runoff, especially spring snowmelt, can also transport nutrients off-site.

Soils with a straw surface thatch also pose challenges. Nitrogen, phosphorus (P) and sulfur (S) can be immobilized (tied up) by microbes who use the nutrients when decomposing surface straw.

Surface application of immobile nutrients like P and potassium (K), which only move a few millimetres in the soil, can also mean those nutrients are stranded at the surface and maybe more difficult for crop roots to access.

Weed competition can also be higher with surface application of nutrients. Shallow germinating weeds have preferential access to the nutrients compared to crops that are seeded and root deeper.

Manage surface N carefully
Surface application of N without incorporation into the soil is risky. Research at North Dakota State University found that up to 20 per cent of surface applied urea was lost over 10 days with temperatures at 30 C. Losses were higher at higher pH; greater than 33 per cent loss when soil pH was greater than 7.5.

These losses happen when urea dissolves on the soil surface and an enzyme called urease converts the fertilizer to ammonia gas, which is lost to the atmosphere. Broadcasting urea on warm, moist soils with lots of surface trash means potentially high volatile ammonia losses because the urease enzyme is very active.

But if urea is banded or incorporated into the soil, ammonia produced by enzymatic hydrolysis of urea will be largely retained by conversion to ammonium. 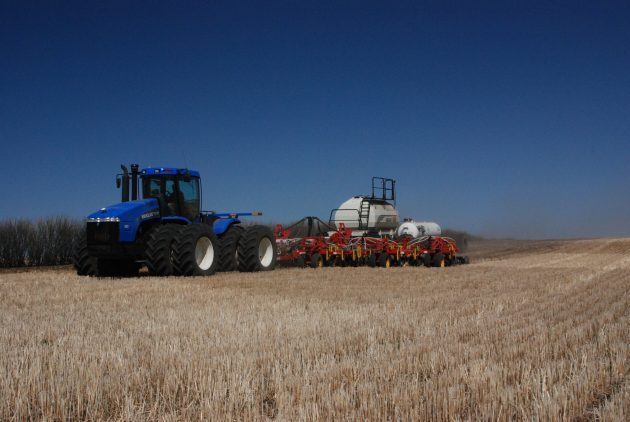 Banding provides the optimum fertilizer use efficiency for most nutrients. Photo by Bruce Barker.

Urease inhibitors block the urease enzyme from converting urea to ammonia, providing a window of up to a couple weeks to allow rain to move the urea into the soil. Polymer coatings, such as ESN fertilizer, can also help by slowing the release of urea.

Schoenau also cautions against surface application of urea to snow or frozen soils. Urea will not move downward into the soil because it is frozen. This makes is susceptible to loss in rapid spring melt or can be blown away.

“There can also be hydrolysis, even in winter,” he says.

Surface placement of P not recommended
Surface application of P is not recommended, unless incorporated into the soil.  Without incorporation, water soluble P is prone to runoff, especially if applied in the fall.

Broadcast without incorporation is also agronomically inefficient. Schoenau cites a 2014 Saskatchewan study on soybean. Broadcast P was no better than the control treatment without additional P fertilizer, while in-soil application yielded 36 per cent higher.

Surface placement of K inefficient
Potassium is relatively immobile in prairie soils due to its attraction to clay and organic matter surfaces, and can only move a few mm in the soil. Surface placement can also result in K getting “hung up” in a dry surface layer.

“An old rule of thumb is that to account for reduced efficiency of surface placed K, increase the rate by 50 per cent to achieve the same response from K placed in the soil in the year of application,” Schoenau says.

Losses of K, even when surface placed, are generally small and, unlike P and N, are not of environmental concern.

The chloride (Cl) component of potash (KCl; 0-0-60) fertilizer is mobile, and can move into the soil with precipitation. On soils with very low levels of Cl, cereals may respond to applications of potash.

Sulfur application
Schoenau says that ammonium sulfate (21-0-24) can be broadcast on non-calcareous soils since sulfate is mobile. When applied to the soil surface, sulfate will move into the soil with precipitation. However, there can still be gaseous N losses with ammonium sulfate, although less than surface broadcast urea.

Surface broadcast elemental S (e.g. 0-0-0-90) can work, but the elemental form is insoluble. Elemental S needs to disperse into small particles, which are turned into plant available sulfate by microbial oxidation. This dispersion can take time, and application must be planned well ahead of crop needs. Surface application may help with the dispersion and oxidation.

Micronutrient success varies
No significant gaseous losses occur with micronutrients.  However, copper (Cu) and Zinc (Zn) are not good candidates for surface application. They can be readily bound to soil particles (precipitated), and can be stranded at the soil surface. The best strategy is to incorporate or band the nutrients to increase root access.

Boron (B) and Cl are both mobile and will move into the soil with rainfall.

“When looking at surface placement of nutrients, consider the 4R nutrient stewardship; the interactions among form, placement, rate and timing; when deciding what is required to make that nutrient work the best,” Schoenau says.