Tweaking an old stripe rust resistance gene to make it effective again in fighting this disease. 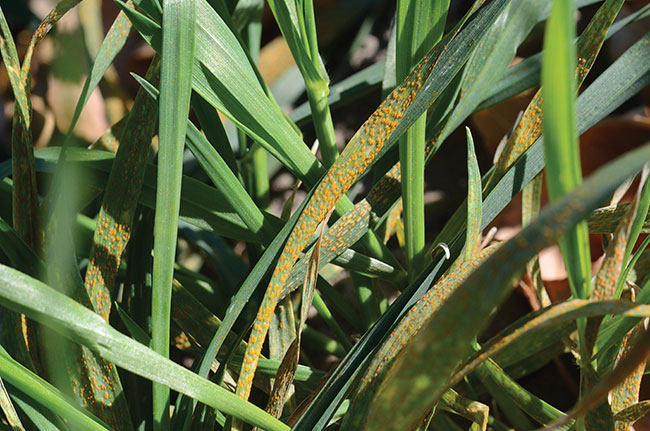 If this approach works for stripe rust resistance, it could open the way to up-cycling defeated genes for other crop diseases.

Stripe rust (Puccinia striiformis) can cause devastating yield losses in susceptible wheat varieties. This disease produces yellowish orange pustules on wheat leaves. Each pustule contains thousands of spores that can be carried for long distances by the wind. On the Prairies, stripe rust levels tend to be highest in southern Alberta.

The limited number of effective stripe rust resistance genes is a serious concern for wheat breeders and growers. “The stripe rust pathogen is very good at mutating itself and defeating single disease resistance genes in wheat. As time goes by, the pathogen defeats the available resistance genes one after the other,” explains André Laroche, a research scientist with Agriculture and Agri-Food Canada (AAFC) at Lethbridge who is leading this research.

“It takes time to obtain new resistance genes. They are often found in wild grass species, and it requires quite a bit of work over many years to bring them into wheat. It is difficult to make crosses between a wild grass and a wheat plant, and hard to get fertile plants from those crosses. As well, there is always uncertainty about how these novel genes might interact with other disease resistance genes present in the wheat germplasm and whether they might bring negative impacts to the plant.”

He adds, “Currently there are only two known genes that provide strong, efficient resistance to all races worldwide of stripe rust. In addition, there are perhaps eight other genes that are functional in North America. So the number of effective genes is low, which is scary for the future.”

Although fungicides can be used to control stripe rust, the pathogen is also very good at evolving to withstand different fungicidal modes of action. So, frequent use of fungicides could lead to fungicide-resistant strains of the pathogen. That would leave very few options for protecting wheat against stripe rust. As well, fungicide applications increase input costs for growers and can potentially have environmental impacts.

Reinvigorating Yr10
“This idea to up-cycle resistance genes wasn’t just a crazy dream,” Laroche says. “Researchers working in Arabidopsis [a ‘model’ plant often used in research studies] have shown that, by making small mutations in key parts of resistance genes for other diseases, they could come up with a slightly different gene structure that was functional again. We wanted to mirror that work from Arabidopsis in a wheat disease resistance gene.”

Stripe rust resistance genes are called “Yr” genes because yellow rust is another name for the disease. Laroche’s project involves Yr10, a gene that has been available to breeders for many years. Although Yr10 still is effective in some parts of Canada, the pathogen’s strains in southern Alberta and in the U.S. Pacific Northwest (the main source of stripe rust spores blowing into Alberta) have evolved to overcome this resistance gene.

This need to pyramid several different Yr genes into a cultivar is another reason why it is vital for breeders to have access to more stripe rust resistance genes.

Stripe rust is a longstanding concern in the Lethbridge region, and Laroche has done many studies on this pathogen over the years. He chose Yr10 for this current project because he and his research group had previously worked with this gene and determined its complete DNA sequence. Plus they have a collection of stripe rust isolates that they can use to test against the modified Yr10 genes.

“Yr10’s DNA sequence has three adjoining regions that are very important in the functionality of that gene,” Laroche explains. “Our idea is to modify the first and the third regions slightly to see if we can make the gene functional again when challenged with stripe rust isolates that defeat the original Yr10 gene.” 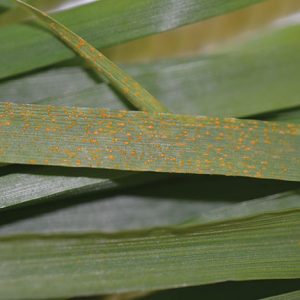 In the trial, both farm-saved seed and Certified seed had the same average yield and protein. 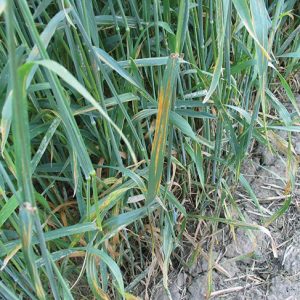 By making some tweaks in a defeated stripe rust resistance gene, Laroche hopes to make the gene able to fight the disease again.

Steps in the study
This project is a proof-of-concept study to confirm that it is possible to modify a defeated resistance gene in wheat and obtain useful, effective versions of that gene. For ease in proving the concept, Laroche’s group is using some shortcuts that involve genetic manipulation of Yr10. He says, “Genetic manipulation is not accepted by the wheat industry internationally. So, once we know for sure that the concept works, we will need to go back to a plant with the defeated Yr10 gene and use a different tool – genome editing – to tweak the Yr10 gene in situ based on the sequences that we have shown to be effective.” He is hopeful that the wheat industry will accept genome editing in wheat.

Laroche and his group have almost completed phase one of this project. Their first step was to find DNA sequences in wild grasses that are very similar to Yr10, but with some differences in those two key regions of the gene.

Then, based on each of these wild genes, they are making very precise changes in a Yr10 gene to exactly match the sequence of nucleotides – the building blocks of DNA – in those two regions of the wild gene. Next, they sequence the modified Yr10 gene to verify that they have made the intended modification.

“Right now, we have eight of these new sequences that we have made and verified. And each of these new sequences are in a piece of DNA that we call a vector that enables us to multiply the gene and also insert the gene into a susceptible wheat line, where we will test them against isolates of stripe rust. So, these eight are ready to go into wheat,” he explains.

“We have another six sequences that are almost ready to go. We have generated the new sequences and we just need a couple more weeks of lab work before we are ready to sequence and verify them. Once that is completed, we will be able to insert each of these six genes into a susceptible wheat.”

Laroche’s lab was closed on March 16 because of COVID-19 restrictions, and as of mid-July, it had not reopened. He says, “We are surely looking forward to when we will be allowed to go back to our lab to quickly complete this work and start phase two of the project, which is introducing these modified genes into susceptible wheat lines.”

To insert a modified Yr10 gene into wheat, they will bombard immature wheat embryos with that piece of modified DNA. Only about 1 or 2 per cent of the bombarded embryos will develop into a plant that expresses the modified gene.

Laroche’s group will select those few embryos that are most likely to have the gene. Then they will grow those embryos under carefully controlled conditions in growth chambers to ensure the stripe rust screening will be as optimal as possible and ensure the test material will not escape from the lab.

Once the plants reach the three-leaf stage, they will be inoculated with different stripe rust isolates to see if the plants are resistant to isolates that defeat Yr10.

If some or all of the plants are resistant, this would prove that it is possible to up-cycle a defeated stripe rust resistance gene.

Laroche’s group would then use genome editing in collaboration with John Laurie’s team, also at AAFC-Lethbridge, to tweak the Yr10 genes in existing elite wheat lines into the effective variants. All the other traits in these lines would be unaffected – a big benefit for breeders who want to cross their breeding material with these lines. 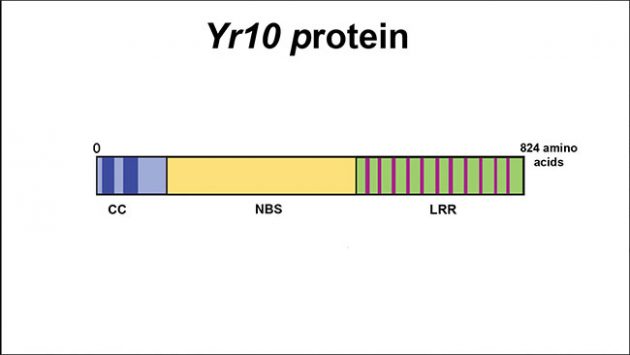 The protein encoded by Yr10 is made of 824 amino acids. It is composed of three sub-domains: coil-coiled (cc), nucleotide binding site (NBS) and leucine-rich repeat (LRR). The LRR domain, which includes 11 leucine-rich elements, interacts with one or more secreted proteins from the pathogen. Then the NBS domain binds ATP (cell’s fuel) and makes the protein active to enable the CC domain to interact with the host (wheat) machinery to launch the defence mechanism against the pathogen. courtesy of André Laroche.

Easier, faster, stronger
“Once the air is clearer about genome editing, we hope to have several Yr variants available to be channelled into the breeding pipelines of wheat breeders. It’s hard to predict, but we might have up to six or eight effective variants of Yr10,” Laroche notes.

“That would give wheat breeders a large source of resistance genes that they could pyramid together in their cultivars. And breeders are familiar with Yr10 – they know it doesn’t have any negative impacts on wheat with the type of germplasm they are using.”

He says, “This project would provide breeders with premium sources of stripe rust resistance that they could incorporate into their germplasm without affecting the quality in all the other parameters they have to work with.

“And growers would have new wheat varieties with new, durable stripe rust resistance genes in an optimized package.”

This research could also open up many opportunities to up-cycle other defeated resistance genes for protecting wheat against other diseases where effective disease resistance genes are scarce.

“I think this approach is very promising. It is a lot easier and a lot faster to incorporate a tweaked gene into wheat than to move new genes from a wild species into wheat,” he says.

“The only requirement would be to have the DNA sequence for a given defeated gene. We already have sequences for some other stripe rust, leaf rust and stem rust resistance genes. And more resistance genes are being sequenced all the time. This is also true for other genes that provide resistance to other fungal diseases in wheat. And I think it could also be expanded to protection of wheat against insects as well in the near future.”

The Alberta Wheat Commission and Saskatchewan Wheat Development Commission are funding this project, and AAFC provides internal funding for Laroche and his research group.