In Newfoundland and Labrador it’s a real struggle to grow corn and shipping in silage for livestock is a huge cost for local farmers. Mumtaz Cheema, an associate professor at the Grenfell Campus of Memorial University in Corner Brook, N.L., wants to help change all of that.

One of the first things Cheema recalls noticing when he first came to Newfoundland in 2013 was the high cost of milk, compared to the rest of Canada. When he had the chance to meet a director of the Dairy Farmers of Newfoundland and Labrador, he soon learned about the difficulties cattle producers faced in growing their own feed in a very low heat unit climate. Seeing an opportunity to make a real difference for the province’s farming community, he immediately set out to research ways to evaluate regional corn silage hybrids.

“There was very little information available,” Cheema recalls. “Agriculture research in the province is still at infancy.”

The very first challenge he faced was simply generating a list of 2,000 to 2,200 heat unit hybrids that would be capable of maturing before the end of the growing season. There weren’t more than 10 options in total. After consulting with Vanessa Kavanagh, alternative feeds coordinator with the province’s Forestry and Agrifoods Agency and collaborator in this project, that list was whittled down even further.

“Because everything comes through the ferry, some were not available,” Cheema explained. “I chose these five because I could actually get the seed for these five.”

DKC-2317 and DKC 26-28 by DeKalb, Fusion and Yukon by Elite, and A4177G3 by Pride were seeded on June 4, 2015, at a rate of roughly 36,000 seeds per acre. Cheema says they had to grow the plot under plastic, so they used a Samco three-in-one plastic laying machine vacuum planter and a perforated clear polymer mulch that eventually degrades in season. All corn hybrids were Roundup Ready, so weed control in the plot was comparable to farm practices. Before harvesting on Oct. 16, 2015, however, a number of assessments were conducted. Cheema says that farmers on the west coast of the island additionally have to contend with low soil fertility, so he also needed to closely assess nutrient use in the trial.

“I wanted to do this experiment at two sites, one with low phosphorus and one with high phosphorus, but I couldn’t because most farmers simply blanket apply nutrients and I couldn’t find a single point that is phosphorus deficient,” he explained. “So we applied manure in keeping with farmers’ practices.”

Cheema says applying inorganic 0-45-0 fertilizer, a low-phosphorus manure collected from one nearby dairy farm, a high-phosphorus manure collected from another local dairy farm, and no manure as a control on each hybrid, over four replications, generated a significant amount of data for his team to analyze over the winter. Especially since they collected root zone soil samples from every replicate two weeks after emergence, at the six-leaf stage, at silking, and at black layer stage. He also had his research team install tubes, which allowed him to monitor in-situ underground growth using a root scanner at intervals throughout the growing season.

“We were trying to see how the manure affects root morphology, plant biomass, P uptake in plants and so we collected soil samples to analyze the phenolics, enzymes or microbial colonies that impact phosphorus availability,” he explains. “We installed the acrylic tubes to measure the root traits if there is any correlation between biomass and root morphology.”

Analyzing all of this data, along with leaf area and leaf chlorophyll and greenhouse gas emission measurements, will take many months still. Cheema is waiting on feed quality analysis results because local lab services are limited. He’s essentially had to work at establishing a qualified facility of his own instead of submitting samples last year, as many mainland researchers would do. However, he believes collecting this abundance of data will pay off in the end as the trial harvest data has already produced unexpected results.

When assessing biomass last year, surprisingly, one of the shorter day hybrids significantly out yielded the higher crop heat unit (CHU) competitors. At just 2,150 CHU, Yukon produced 20.84 tonnes per hectare (t/ha) upon harvest. The other 2,150 CHU hybrid, DKC 26-28, followed close behind it with 20.27 t/ha. Meanwhile the 2,175 CHU hybrid, A4177G3, performed the poorest of all at 15.7 t/ha. With both the longest and shortest day hybrids falling in the middle of the pack, Cheema believes it’s quite clear that there’s a lot more to selecting a high-performing hybrid in this
climate than assessing day length.

“Heat units are only one factor,” he says. “Sometimes the genetic potential of hybrids allows them to perform better.”

Cheema believes that close analysis of the root morphology of these plants may reveal a correlation between the root growth of each hybrid and final yields. Though there’s still a great deal of work to accomplish, when he’s done, it’s very possible his findings may have even greater implications than simply benefiting the corn silage producers of Newfoundland and Labrador alone. 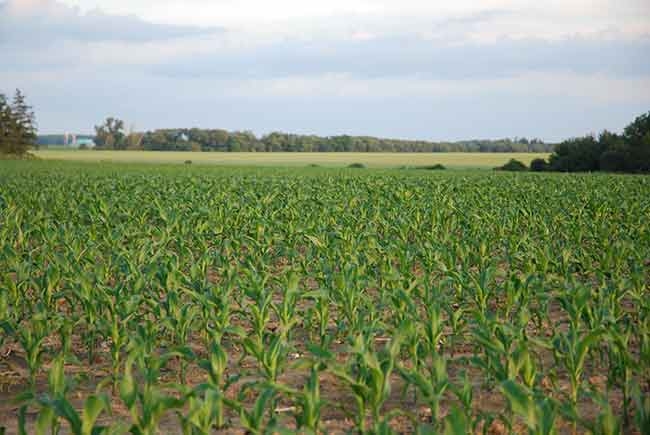 Silage corn seeding at Pynn’s Brook Research Station. In Newfoundland and Labrador it’s a real struggle to grow corn and shipping in silage for livestock is a huge cost for local farmers.
Print this page