Jan. 14, 2013, Urbana, IL - Perennial biofuel crops such as miscanthus, whose high yields have led them to be considered an eventual alternative to corn in producing ethanol, are now shown to have another beneficial characteristic–the ability to reduce the escape of nitrogen in the environment. In a 4-year University of Illinois study that compared miscanthus, switchgrass, and mixed prairie species to typical corn-corn-soybean rotations, each of the perennial crops were highly efficient at reducing nitrogen losses, with miscanthus having the greatest yield.

"Our results clearly demonstrate that environmental nitrogen fluxes from row-crop agriculture can be greatly reduced after the establishment of perennial biofuel crops," said U of I postdoctoral research associate Candice Smith. "Because of the establishment variability, we were able to compare annual row crops with perennial crops. Although in the first two years, nitrate leaching remained high in the non-established miscanthus crop, once a dense, productive crop was established in the second year of growth, nitrate leaching in tile drainage quickly decreased."

Smith said that this ability to reduce the loss of nitrogen into the environment will prove to be greatly beneficial.

"Intensive corn production with large fertilizer inputs leads to large losses of nitrogen into the environment, both through gas emissions of nitrous oxide and leaching of nitrate to surface waters through tile drainage systems," added Mark David, U of I biogeochemist. "Nitrous oxide is a greenhouse gas, and nitrate can contaminate drinking water supplies and leads to coastal ocean problems. The hypoxic zone that forms each summer in the Gulf of Mexico is a result of nitrate leaching from the tile-drained Corn Belt of the midwestern United States – a likely location for biofuel production," he said.

In the study, funded by the Energy Biosciences Institute, miscanthus, switchgrass, and mixed prairie species were compared against a typical corn-corn-soybean rotation. Harvested biomass and nitrogen, nitrous oxide emissions, and nitrate leaching in the mid-soil profile and through tile drainage lines were all measured.

David added that the miscanthus and mixed prairie also had very wide carbon-to-nitrogen ratios in the harvested material -- as much as 257 to 1 for miscanthus. "Miscanthus efficiently moved nitrogen from leaves to root and rhizome systems after the growing season, where it could be used again the next year," David said. "The lower nitrogen level suggests that the small amount of nitrogen removed by harvest in prairie and miscanthus came from the large pool of soil nitrogen and/or nitrogen fixation. If the soil is the source, this could lead to depletion of this resource without fertilization. If microbial fixation supplied the nitrogen, this would be a more sustainable input," he said.

David said that although more research is needed to fully understand the nitrogen cycle in these new and exciting biofuel crops such as miscanthus, results from this study clearly show these crops have the potential to quickly and greatly reduce nitrogen losses that have important environmental effects, while providing a large biomass harvest.

"Reduced Nitrogen Losses after Conversion of Row Crop Agriculture to Perennial Biofuel Crops" was published in an issue of the Journal of Environmental Quality. In addition to Smith and David, Corey Mitchell, Michael Masters, Kristina Anderson-Teixeira, Carl Bernacchi, and Even DeLucia contributed to the research. 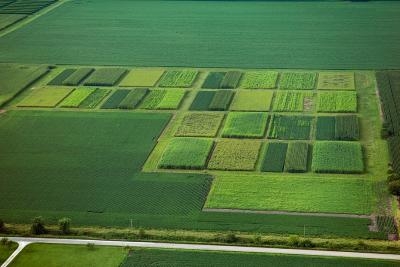 An aerial of the bioenergy farm near South First Street in Champaign. Researchers at the University of Illinois have found that perennial biofuel crops have the ability to reduce nitrogen escape in the environment.